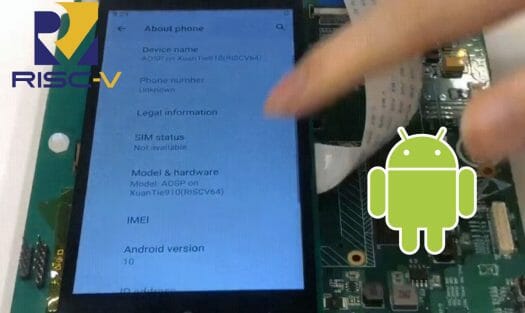 RISC-V has made a lot of progress in just a few years, but for anything requiring 3D graphics acceleration, it’s not quite there yet. and we only expect RISC-V SoC with Imagination Technologies GPU to come out later this year on hardware such as BeagleV SBC.

An OS that will definitely require 3D graphics acceleration is Android, and work has already started since T-Head, a business entity of Alibaba Group specializing in semiconductor chips, has already ported Android 10 (AOSP) on RISC-V architecture with support for graphics and the touchscreen display.

You’ll find instructions to build Android on RISC-V by yourself on Github, but since AFAIK the board is not publicly available right now, it’s not possible to try it out unless you work for T-Head… That means Android capable RISC-V SBCs are probably coming this year, likely followed by RISC-V TV box a little later, and potentially RISC-V smartphones in a few years.

There’s similar information on T-Head website, plus an invitation to join the “Open Chip Community” group on DingTalk for people interested in the project.

Nice. Looking forward to seeing the first commercial RISC-V Android phone in a year or two.

Does that mean it will run Linux too? With GUI? If so: hacked together with binary blobs, or plain (mainstream?) Linux?

Vivante is already supported by Mesa via the etnaviv driver.

“BeagleV will be supported by mainline Linux and a Debian-based software image will be provided”. So Linux will be supported first, but if you’d like to get 3D graphics acceleration it will take longer as well.

I’d suspect RISC-V + Imagination PowerVR SoCs will work on Android first, with Linux support coming later (possibly with hack from Android drivers), but for RISC-V + Vivante SoCs like T-Head ICE may well support Android and Linux at about the same, as long as it’s not difficult to port etnaviv open-source driver from Arm to RISC-V.

As etnaviv is in vanilla mesa porting should be a minor issue, but well theory vs real life 🙂

On the picture of the XuanTie: “Extra CP910V @ 1.2GHz core with vector extension, up to 128bit” I would like to compare a today vector processors with GPGPU, capabilities. Vector processors was the power of the Cray computers or Cell architecture (this one has other limits in its processor architecture), and it could again be competitive. some interesting articles, show the principle and power of vector processors over SIMD. But in fact, it could be very usefull in today web application too, mainly on column oriented DB (Redshift, BigQuery,Snowflake, HBase) or compute RRDTool based data

Interesting artical, I had to look up process 28HPC+ meaning ref : https://www.synopsys.com/designware-ip/technical-bulletin/logic-library-capabilities.html

So I learned more too ?

The chip doesn’t, but the board might via an external module like it’s done on PinePhone smartphone.