Nothing unexpected or particularly scary happened this week, so here we are – with 5.11 tagged and pushed out.

In fact, it’s a smaller-than-average set of commits from rc7 to final, which makes me happy. And I already have several pull requests lined up for tomorrow, so we’re all set for the merge window to start.

But in the meantime – and yes, I know it’s Valentine’s Day here in the US – maybe give this release a good testing before you go back and play with development kernels. All right? Because I’m sure your SO will understand.

Last time around, Linux 5.10 was an LTS release that added EXT-4 performance enhancements, improved post-Spectre performance, as well as the enablement of BCM2711 (Raspberry Pi 4) display pipeline, among other many changes. 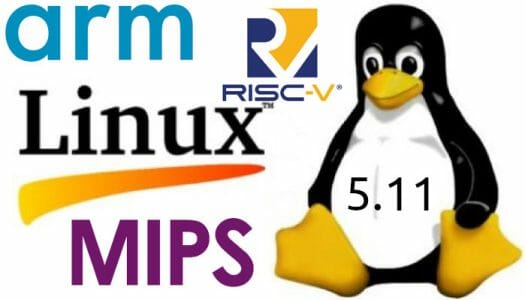 Some of the notable changes in Linux 5.11 include:

Linux 5.11 changelog for the Arm architecture

You can check out a more detailed Linux 5.11 changelog here. It was generated with the command git log v5.10..v5.11-rc7 --stat. Alternatively, you should soon be able to read the changelog on KernelNewbies website.

Name is (so with unicode-hearts in it): ? Valentine’s Day Edition ?

GPIO also went in.. so now the 5 people that have MSC313(E) thingies can blink their LEDs from mainline. Only ~300 commits left to go.

And they thank you greatly!

We’ve had a large push for mainlining older Android devices (including some Tegra3 based ones) over the past year, partially due to the GPU drivers finally working out of the box on many SoCs.

Cool, still having a tegra2 tablet, so maybe one day…

Or my dream would be the Samsung P6800 (Galaxy Tab 7.7), my first tablet, still loving it, but with ICS it’s nowadays basically useless. Plasma mobile would be great!

I have an Ouya myself & always wondered about the status of Linux on it. All I find are outdated guides for ancient kernels & DEs, and some valiant efforts to port Android (w/o any HW accel obviously). It’s sad to see a totally capable device relegated to basically collect dust on a shelf…

This is pretty good news… maybe an Armbian port isn’t too far-fetched now! I’ll look into this.