Orange Pi PC is an Allwinner H3 SBC that was launched in 2015 for as little as $15 plus shipping (now $17.42 with 1 GB RAM), and made by a company called Shenzhen Xunlong Software. The next year, the company launched Orange Pi PC Plus with 8GB eMMC flash and WiFI connectivity for $20 (now $25.54).

It appears another company named “Shenzhen LC Technology” has designed a board with similar specifications & layout, so not technically a clone, but close enough. Meet Cherry Pi SBC. 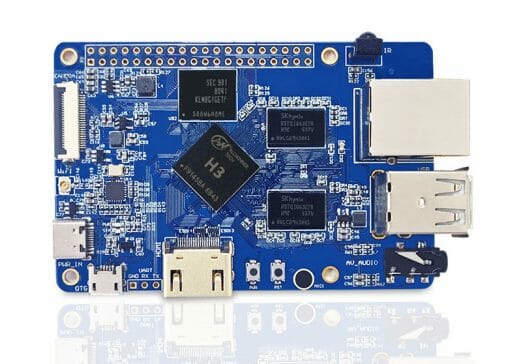 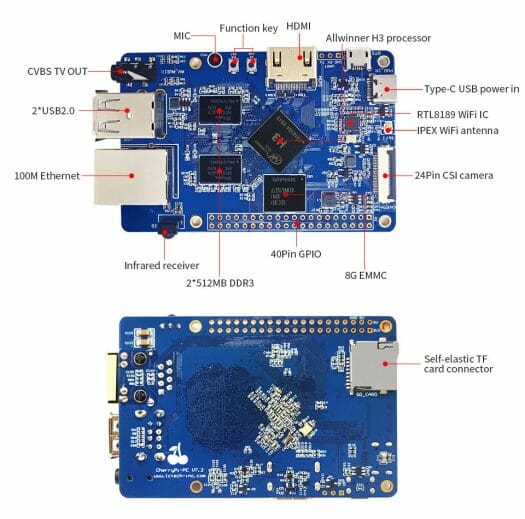 The board comes with one fewer USB port compare to Orange Pi SBC, and also offers optional eMMC flash and WiFi connectivity to match Orange Pi PC Plus specifications. There’s an option for 512MB RAM, and the power barrel jack has been replaced by a USB-C port, but apart from that the boards are basically the same.

I found out about the board on Orange Pi Facebook Group (note: private group), where a user called Antonios purchased the board and could confirm it to work with Orange Pi PC / PC Plus images:

Just an update to all, it works perfect on Orange pi pc plus images, including the WiFi. Tried Ubuntu 16.04 and Armbian, so I reckon it’s a copy of Orange pi pc

Cherry Pi PC V7 is sold on Aliexpress for as low as $16.5 plus shipping with 512MB RAM, and up to $28.20 plus shipping with 1GB RAM, 8GB eMMC flash, and WiFi. Sample pricing is actually a little higher than for the equivalent Orange Pi PC (Plus) board, but Cherry Pi PC does not appear to be limited to one piece per order.

Shenzhen LC Technologies also offers other Cherry Pi boards with Cherry Pi PC V3S for camera applications, and Cherry Pi PC H6 with Allwinner H6 quad-core Cortex-A53 processor, all of which can be found on the products page.

Always wonder – how “PC” can go with 1Gb RAM ? Now days android smartphone laggy with 1Gb. But we have even 512 Mb version…

Who use them and for what?

This is a mailserver (in a VM with ZRAM instead of traditional swap configured):

And this is an SBC that monitors all kind of stuffs (of course also running a mailserver). It features 1GB RAM since at the time of purchase we couldn’t order SBC with a reasonable amount of memory (512MB or less):

And here is a good old wifi router used for my ESP8266 stuff and also running the MQTT server:

Yep, no more than 11 MB of RAM needed to run a full Linux system + WiFi stack + MQTT server. Hint: when your system runs low on memory, kill the browser. If it still runs low, kill systemd.

It’s probably just to keep the same kind of name as used with “Orange Pi PC”.

A smartphone is an computer right? Only the way of interface is different. And iPhone has 1 gb Samsung 12 gb and they both work.

Android is a very shitty OS. What do you expect? A linux kernel with a proper GUI is less heavy than this Android crap.

PiCore uses only <100MB of RAM with full desktop, so 512MB of RAM is well enough.

﻿…except network since relying on the internal Fast Ethernet PHY.

And shipping from AliExpress to Serbia is 39$ 🙁

It’s just $4.72USD shipping to Canada but hard to justify its purchase with such limited RAM for my current computational needs. It’s not 2012 anymore. My first Android TV Box(Minix Neo X5) I purchased in early 2012 had 1Gb of RAM & 16Gb eMMC storage.

I think I’ll stick with actual OrangePi boards as these add nothing to the game and actually lose functionality.

Adding to that: no schematics, no buy.

Who knows how those 40 GPIO pins are wired? Really exactly like on Orange Pi PC (Plus)? Don’t want to waste hours in an trial&error attempt to get some I2C, 1Wire or SPI peripherals working just to realise that device tree and hardware don’t match (BTDT, last time with some Banana junk that wasn’t documented properly as always).

Probably they did it for a customer and decided to increase their revenues by selling it to the world without investing more on doc nor enclosure.