While it’s possible to use Raspberry Pi Pico with a breadboard or Veroboard, we’ve seen the benefits of inserting the board into a baseboard such as Maker Pi Pico providing LEDs, a MicroSD card, audio output, and the ability to add ESP-01 WiFi module or well as up to two Grove expansion modules.

Hammond Pearce decided to design his own Raspberry Pi Pico baseboard with Kiwikit board supporting some of the off-the-shelf modules and interfaces he commonly uses. 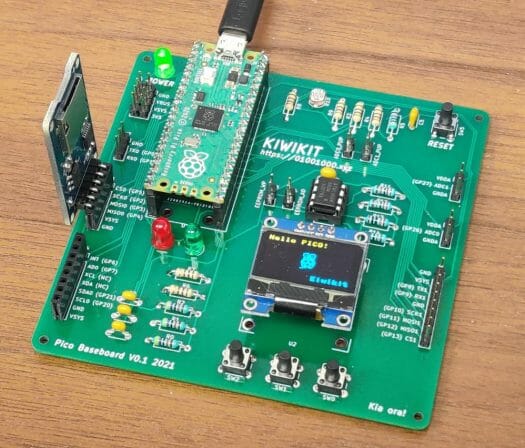 The Kiwikit board is open-source hardware and designed in KiCAD with the source files available on Github. He ordered 10 boards for $2 from JLCPCB, plus shipping ($15). It’s unclear whether Hammond plans to sell the board, so you may have to make it yourself. You’ll find more information in the blog post where he explains his design and decisions in detail.