WiFi 6E is a new wireless standard that operates in the 6 GHz frequency band. We’ve already seen it used in consumer products such as premium smartphones and routers, as well as some embedded SBCs that take Qualcomm WiFI 6E cards.

But now Infineon, who purchased Cypress Semiconductors last year, has unveiled the AIROC CYW5557x family of WiFI 6/6E chipsets designed for the IoT, enterprise and industrial applications for the 1×1 models, and for multimedia, consumer and automotive applications with 2×2 MIMO. 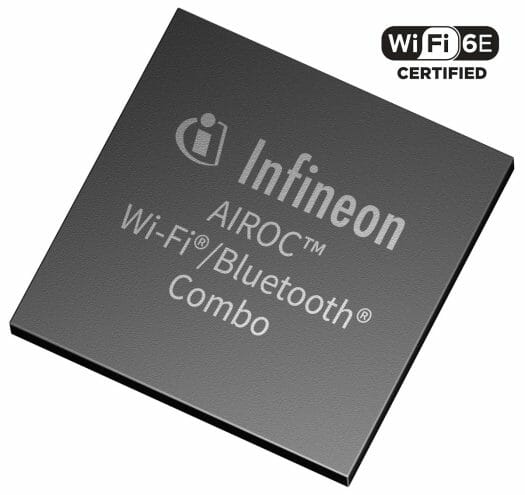 Infineon AIROC CYW5557x has three SKUs that share most of the same specifications:

The built-in advanced on-chip Wi-Fi/BT coexistence is said to improve multimedia streaming and gaming responsiveness in overlapping network environments, but this can be further enhanced thanks to external coexistence interfaces.

One of the first CYW5557x modules will come from Murata, and the press release also mentions CYW89570 Wi-Fi 6E chip specifically designed for automotive applications that will be found in LG Innotek, u-Blox, and nFore modules.

Infineon AIROC Wi-Fi 6 / 6E and Bluetooth 5.2 combos are currently sampling to select customers and are showcased in Infineon’s virtual booth at Embedded World 2021. Additional details may be found on the product page.

Broadcom to Cypress to Infineon…