While companies like Hardkernel, Raspberry Pi, Orange Pi, and FriendlyArm offers affordable, great little Arm Linux development boards that are suitable for many projects, in some cases, your requirements may lead you to spend a bit more for either extra CPU power, more memory, AI processing power, faster I/Os and so on.

That’s why I did a list of the most powerful Arm single board computers in late 2017, but with over three years passed since then an update is warranted. The boards from the list must be easily purchasable from individuals (with the cash to spare) or small companies, so we’ll exclude hard-to-source hardware, as well as Arm server boards like Ampere eMAG motherboard, that do not really qualify as single board computers. 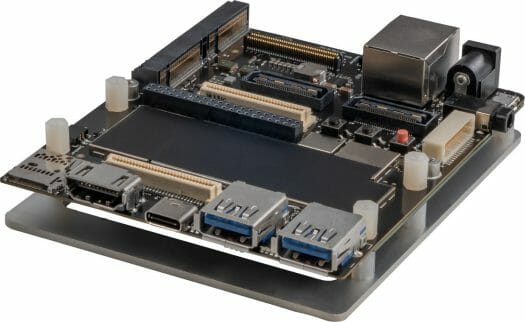 While there are plenty of Cortex-A72/A73 development boards around, it’s much hardware to find one with more recent Cortex-X1 or Cortex-A78 cores, and Lantronix Snapdragon 888 Mobile Hardware Development Kit is one such rare platform.

It’s mostly designed for Android app development, and to help OEMs get started with the development of Snapdragon 888 based mobile devices.

All those goodies will cost you with the board selling for $1,349, and the full development kit with display and camera boards goes for around $2,600. 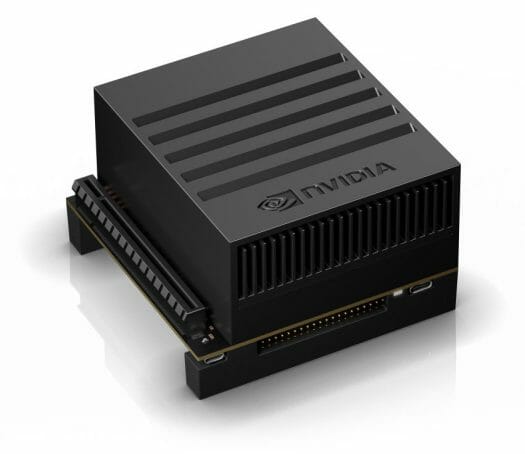 NVIDIA has a range of Jetson developer kits including Jetson Nano, TX2, Xavier NX, but the Jetson AGX Xavier developer kit is the most powerful of the lot with an 8-core ARM v8.2 processor, a 512-core Volta GPU, and AI accelerators that deliver up to 32TOPS of processing power for AI workloads. The kit also integrates 32GB RAM, 32GB eMMC flash expandable with a UFS card, HDMI 2.0 and MIPI DSI video interface, up to 16x 2-lane CSI camera interface, and more.

NVIDIA Jetson AGX Xavier developer kit can be purchased on Amazon for $699. 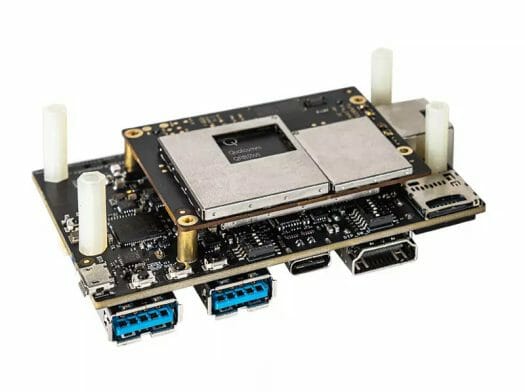 The platform can run Linux, Ubuntu, and Robot Operating System (ROS) 2.0, and supports OpenCL and OpenGL ES APIs, as well as OpenCV for computer vision applications.

The “Core Kit” with the mainboard, QRB5165 SoM, power supply, and USB cable can be purchased for $495, there’s also a “Vision Kit” with tracking sensors and a camera going for $695. 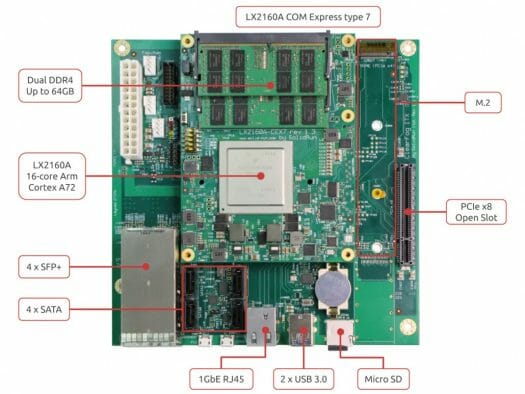 SolidRun HoneyComb LX2K Arm SBC features an NXP  LX2160A 16-core Arm Cortex-A72 processor, supports up to 64GB RAM, offers high-speed networking thanks to up to 4x SFP+ 10GbE cages and a Gigabit Ethernet port, as well as four SATA ports, a PCIe x8 slot, M.2 SSD slot and more. Those features make the board suitable for both networking applications, and be integrated into an Arm workstation for native application development.

Ubuntu, Debian, and Fedora can run on the board, but SolidRun said it was working on SBSA compliance a while ago, meaning it should boot any Linux SBSA compliant distributions, but I’m not sure about the status. The source code can be found on Github.

HoneyComb LX2K can be purchased for $750 with a 64GB eMMC flash, RAM not included. The board complies with 96Boards Enterprise Edition specification. 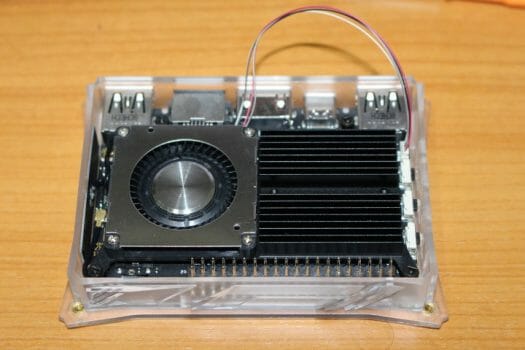 Khadas VIM3 Pro SBC may seem out of place in this list with an hexa-core Cortex-A73/A53 Amlogic A311D processor, coupled with a paltry 4GB of RAM and a 32GB eMMC flash, but that’s still a powerful platform, for instance, compared to Raspberry Pi 4 8GB, and it also includes of 5 TOPS NPU, offers good networking with Gigabit Ethernet and 802.11ac WiFi 5 with RSDB support, and higher capacity and faster storage is possible via an M.2 NVMe SSD. There’s also a 40-pin expansion header, wide power input (5V to 20V) with USB-C port,  an accelerometer, and more.

The hardware is already pretty cool, but what makes Khadas VIM3 Pro, or even its little brother Khadas VIM3 Lite is that many application developers and software engineers appear to use the platform to develop the latest version of their software/app. For instance, Khadas VIM3 is an official Android reference board, and Collabora develops Panfrost / PanVk open-source graphics driver on the little board.

Khadas VIM3 Pro can be purchased for $139.99 on sites like Amazon or Aliexpress.

So here’s the list for the first half of 2021, and I’m hoping some new boards to become challengers later this year, notably with the launch of the Rockchip RK3588 processor. If you disagree with this list and would have included other boards, let us know in the comments section.

There are more warnings of even higher memory prices being issued, around the net again. Also rumblings of the old Nvidia Shield SoC being replaced.

For the price/performance the honeycomb lx2k seems to offer it’s a bit strange that there aren’t more reviews, benchmarks and overviews out there. Searching for it on youtube brings up a couple of videos from solidrun then stuff about other ARM systems. Same story searching online, Phoronix and ServeTheHome were apparently getting some but no reviews surfaced. The lack of information makes me reluctant to purchase one.

For me it’s more the lack of LSE atomics that is an issue with 16 cores. The old LL/SC do not scale at all at 16 cores and I’m seeing permanent livelocks on graviton2 machines with 16 threads, that completely vanish with LSE. But for regular workstation usage (i.e not just a single, 16-thread process), the machine must be really nice.

>For the price/performance the honeycomb lx2k seems to offer
>it’s a bit strange that there aren’t more reviews,

It’s not that strange really. $10 – $30 SBC is a impulse purchase that most people can justify by not buying a game on steam, a couple beers or something..

A $750 SBC is a hefty purchase probably equal to a lot of people’s rent/mortgage. $750 on Amazon gets (got you before the world ended) a PC that will just run whatever distro you want and you’ll get a pretty RGB LED filled case to put it in.

Sure but there are reviews of the ampere emag out there which is also a workstation-style board costing $3k+ so why not the lx2k? It’s cheaper, it should be more popular (but not as popular as a raspberry pi 4).

The stuff I can find isn’t encouraging though like this user’s Arch linux bringup experience which was a bit rough: https://mightynotes.wordpress.com/2020/02/29/rocking-a-16-core-arm-workstation-for-data-analysis-and-nas-honeycomb-lx2k/

It looks like you can get ampere emag thing in a turn key config. My guess is they sent out some demo units and got some reviews out of it.

That blog post is pretty depressing but seems to be along the lines of my comments on the article here about it. Expensive network SoC on a board from a little company != Killer ARM workstation to make the Ryzen fanboys cry.

I take it you have read this one too?

Khadas VIM3 Pro user here. Best match to my ‘desktop sbc’ needs at the moment. The post Cortex-A73 SBC world has been on-hold for far too long. As usual it’s the politics getting in the way of everyone having nice things™ in 2020-2021. I document some VIM3+Panfrost benchmarks, games, emulator results and configurations here. https://forum.khadas.com/t/vim3-gaming-with-panfrost/11636/2 Will be updating as things progress. The Mali G52-MP4 with panfrost handles geometry quite well, but most applications using a pixel shader will bog down. With the Amlogic A311D targeting a phone’s power and heat profile, its 48 shader cores on the G52-MP4 don’t come… Read more »

We also could be fair to include the Odroid N2+ in the list, as it is a direct competitor to the Khadas VIM3 Pro, with equivalent specs and pricing. The cortex A72/A73 in the N2+/VIM3-Pro delivers a satisfyingly performant daily driver experience, rendering webpages acceptably and running DOSbox at roughly pentium-133 level. Heavy emulators like PPSSPP can be borderline though, especially when asked to run fragment shaders at upscaled resolutions. FOSS games like Morrowind (OpenMW), and Doom3 (dhewm3) and shadertoy demo shaders put that Mali G52-MP4 somewhere in the class of a 2003-era PC gpu – or two steps below… Read more »

Cortex-X1 could become interesting in the future. I could imagine a desktop-focused SBC packing something like 4x Cortex-X1 and 4x Cortex-A55 instead of 1x X1, 3x A78, and 4x A55, because power, size, and cooling constraints are less of an issue than they are in mobile devices.

Well with Covid and chip shortages changing things, it worth remembering the S908X should of been due