Espressif Systems is working on yet another RISC-V chip with ESP32-H2 SoC offering Bluetooth LE and 802.15.4 connectivity showing up in the ESP-IDF framework source code.

A code comparison shows ESP32-H2 is very similar to ESP32-C3 with a single RISC-V core, albeit clocked at up to 96 MHz, and the first Espressif SoC without WiFi, as the WiFi radio is replaced with an 802.15.4 radio for Thread, Zigbee, etc… that can be used for the development of Home Automation, Smart Lighting, and wireless sensor network applications.

While looking at the source code differences between ESP32-C3 and ESP32-H2, the really only major differences were the 802.15.4 radio and lower maximum frequency, and at the current time, it looks like most of the rest is unchanged, so it’s possible they kept the same amount of RAM (400KB), storage, and most of the same peripherals, but it could just well be the code has not been modified just yet. 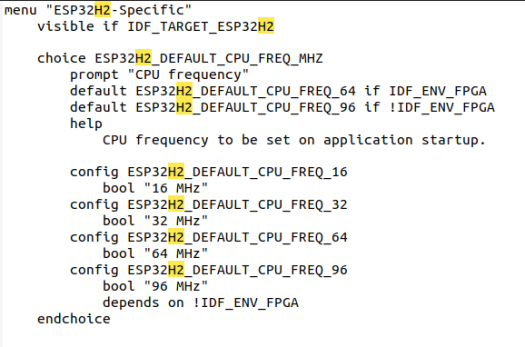 The code will evolve over time, and you can find references to ESP32H2 in ESP-IDF Github’s repo.

It can be interesting for power consumption. If the zigbee is able to wake up the chip it can be nice too.

If it still consumes a lot it can be interesting to make a zigbee gateway (like the SLS which is based on esp32).

ESP is really getting competitive here. Their sdks are still not great though. They have to work on that.

What do you dislike about their SDK? It’s FreeRTOS + HALs + a bunch of network libs.

I’m not sure if there is anything more advanced/mature out there comparable to the software support for esp82xx and esp32 (not talking about the new esp32-xyz).

Actually I’m not only satisfied with the hardware pricing but the mature and stable software support via esphome (www.esphome.io) let’s me just build everything with it. Since years I control pumps, heaters, lights and kind of everything else in and around the house with esp’s.

I wonder if they’ll make a cellular modem too. Probably not, because they’d have to design a whole new radio subsystem. I just really want a competitor for nrf91, which is far too expensive 🙂

Giant piles of patent royalties on cellular chips. nRF9160 probably costs less than $1 to make, then pile on $19 in royalties.

I wonder if the cellular modem from the nRF91 is sourced externally. The nRF91 is a SiP and the processor talk to the modem with AT commands using a serial interface.