This news comes just a few after we wrote about Geniatech DB10 AI development board based on Amlogic A311D hexa-core Cortex-A73/A53 processor and noted there were few platforms based on the SoC, apart from Khadas VIM3 SBC, and a few others. 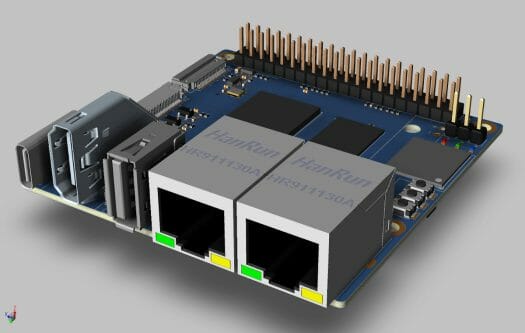 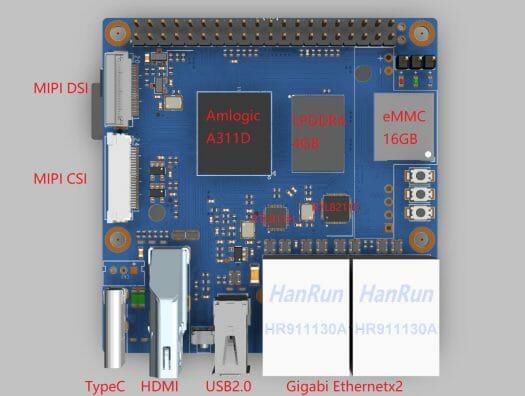 Banana Pi BPI-M2S has the same size as the earlier Banana Pi BPI-M2+ and Banana Pi BPI M2 Pro, but the arrangement of the ports is much different. The Amlogic A311D is also much more powerful than the Allwinner H2 and Amlogic S905X3 found in the two other boards.

The company says the board will support Android and Linux, but there’s very little information on the Wiki at this point in time. The two Gigabit Ethernet ports make the system suitable for router and networking applications, but the board can also be used for AI applications notably computer vision applications, through the display interfaces, camera interface, as well as the 5 TOPS AI accelerator embedded into the Amlogic A311D processor.  I’m not sure there are that many applications that can make full use of the board’s networking, multimedia, and AI functions.

SinoVoIP will often show samples before starting selling the board on Aliexpress six months or so later, but they’ve got a step further by showing 3D renders first.  The company says there are about to manufacture samples, but whether those will be working samples may be another story… So I’d expect Banana Pi BPI-M2S board to become available sometime in 2022.

…if it wouldn’t be a banana pi

Let’s hope ? there are no hardware and driver issues that slow the Khadas etc A311D experienced software programmers, from using their knowledge to program for this board.

Very interesting board. Would be good to find out the pinout of the expansion connectors (although I guess it is likely Pi compatible)

Also, if the USB C port can do OTG.

It might succeed if there are no thermal issues and there is an enclosure.
Jean-Luc, please s/A55/A53/ in the first description 🙂

Is there good linux support for amlogic? I heard not so much.

Depends on your use case. I have an ODroid-N2 which is essentially the same chip. Anything other than graphics has been pretty solid on mainline since 5.6. Graphics has gotten better (Wayland only) in the 5.9-5.10 range but I use mine as a headless server so I haven’t played around much, only read forum posts. I’d guess the Linux they ship with this is the same that ODroid provides which is running a 4.9 kernel or something else pretty ancient.

Khadas Vim3 with A311D is my main linux desktop now for over a year. Does everything I need to do. Opengl/OpenGL-ES (up to ~3.1) with open-source panfrost drivers are mostly working now. Vulkan is a distant maybe. A handful of apps have rendering errors. (Some ppsspp games, Doom3 in some circumstances, terminology). It can do 3D scenes in openMW about as fast as my 2001 PC graphics card. Anything shader-heavy will punch it in the gut and take its milk money. If you want an open-source, mainline-linux Arm SBC, those using Amlogic’s S922X and A311D lead the pack. Nothing against… Read more »