Argon EON is a 4-bay network access storage (NAS) enclosure designed to work with Raspberry Pi 4 that follows other popular Raspberry Pi cases from the company including the Argon One and Argon One M.2.

Also known as the Argon EON Pi NAS, the enclosure features four SATA hard drive ports that will fit two 3.5-inch SATA HDD and two 2.5-inch SATA for a maximum capacity of up to 40 TB with consumer-grade drives, although I suppose it’s not a hard limit. 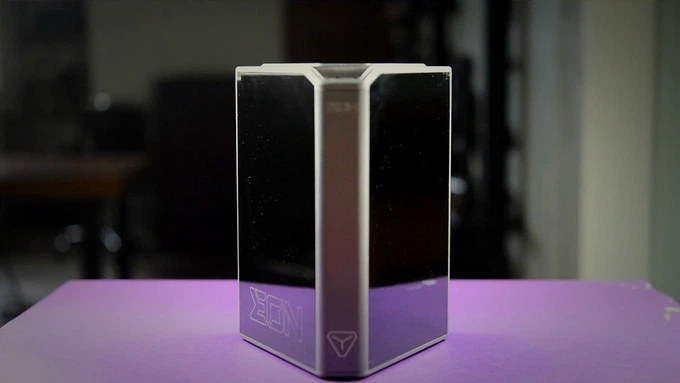 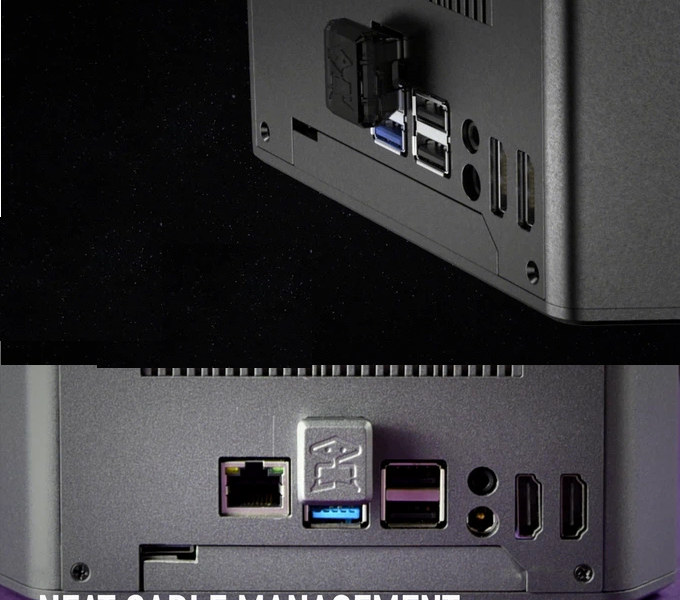 Just like other Argon cases, the Argon EON will bring all ports on the rear panel for neater cable management, but you’d lose one USB port since it’s probably used for the quad SATA board. That also means the data path from the Broadcom BCM2711 to the drives will go from PCIe to USB 3.0 to SATA. We’ll have to see how it affects performance, as Argon40 (that’s the company name) did not provide numbers. It may not matter that much for mechanical hard drives, but it may have an impact if you intend to use SSDs. 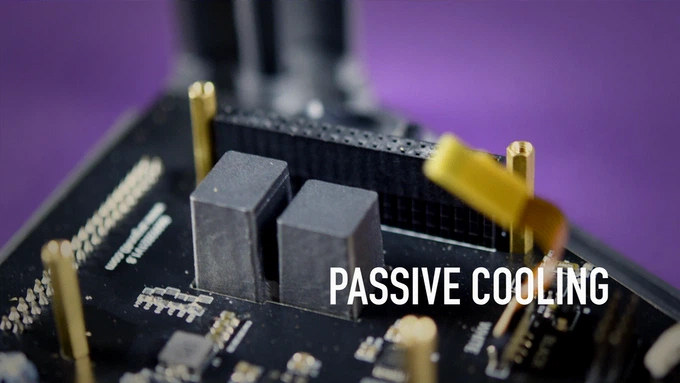 The enclosure is made of “space-grade” aluminum and designed with pillars in contact with the CPU and memory (I assume through a thermal pad), plus a built-in controllable fan to keep the Raspberry Pi 4 and hard drives cool under all conditions.

You could install pretty much any OS supported by the Raspberry Pi, but the company specifically lists the official Raspberry Pi OS, OpenMediaVault (OMV), Twister OS, and Ubuntu for Raspberry Pi. There aren’t any good photos of the NAS, so the best is to watch the video to better understand how it’s designed internally.

An adapter board is connected directly to the HDMI side of the Raspberry Pi 4, so that means alternatives like Rock Pi 4 or ODROID-C4 will not work with the enclosure, or at least not without some serious work. 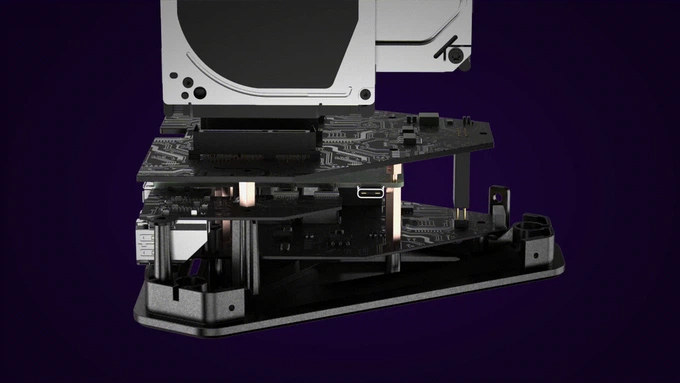 Argon EON NAS Pi has just launched on Kickstarter with a rather low $3600 US funding target that has been surpassed within minutes. Now that the $93 rewards are all gone, you’d need to pledge around $127 for the enclosure plus the 60W power supply, or $198 for a full system equipped with a Raspberry pi 4 with 4GB RAM. You’ll need to add $26 for shipping, and deliveries are scheduled to start in December 2021, but remember that delays are frequent in crowdfunding campaigns, so don’t necessarily expect to receive it before Christmas.

To be more precise it will go from one PCIe attached USB3 port to an unknown USB-to-SATA bridge with an unknown SATA port multiplier behind. It’s one of those many RPi accessories that should have the ‘Made for morons™’ sign on it.

Judging from other tkaiser’s posts I think that’s because he’s strongly against any form of sata port multiplier and/or (cheap) usb to sata bridges for anything more serious than “backup your data on an external drive”.

You can experience a lot of ‘fun’ with such a setup depending on the chips used. If they use the ‘wrong’ USB-to-SATA bridge not querying the disks via SMART can be possible or even general access problems that need USB quirks or even ‘UAS blacklisting’. If they use the ‘wrong’ port multiplier all drives might be reported with identical serial number which can confuse certain softwares (e.g. OMV). Sometimes such stuff can be fixed with firmware updates, sometime not. If the port multiplier only supports CBS and not FIS based switching then performance will suck with concurrent access to more… Read more »

This reminds me of a SATA controller we had in a server in 2002 that couldn’t access the two disks at once. I let you imagine the RAID1 performance we suffered from on this machine! We even ended up disabling RAID to recover the lost performance! I’ve always wondered if such problem did still exist on low-end USB-based controllers.

And the other reason why such products suck is the environment. It’s a NAS and such a thing does not need to be beautiful because you can hide it anywhere you want (network attached storage). Cases for a bunch of disks do exist for free… at your local scrap yard. Same with old 19V laptop power bricks. If designing something new then why not allowing to repurpose old cases and PSUs? Why producing new waste all the time? Some DC-DC circuitry that can deal with 19V to provide stable 12V/5V and a CM4 carrier board combined with a PCIe attached… Read more »

Because not everyone wants a junk yard in their homes? Sorry, but this isn’t really a valid argument. It’s like telling a person to buy a 10 year old car, because the environment.

what if new car looks nicer, but is inferior performance/stability wise? old stuff is often tried and tested (apart from being cheap)

Ok that you want to base your design around a raspberry pi 4 but why the full board instead of the compute module ??
With a compute module you have access to the full pci-e bus to attach any sort of sata controller from broadcom to jmicron or asmedia.

That is very strange, but could be explained by cost of adding ports that regular Pi provides. Then this cases provides full HDMI ports on its own, weird indeed.

Or maybe because they want to sell it to existing Raspberry Pi 4 users so they can repurpose as a nas.

It’s all just simple mechanical connectors and some PCB traces to re-route the mini HDMI ports to full size HDMI ports at the rear. Cheap and not so great.

Probably because it doesn’t need any special skills in board routing, no impedance controlled/matched traces, etc.

You never disappoint in your hatred for USB based storage 😀

Everything around rpi/cm4 accessories is most likely targeting a moron ecosystem.

” The enclosure is made of “space-grade” aluminum ” other than bragging rights, what actual real earth bound world use, benefits from space grade?

It probably resist against meteorites, just in case you’d be extremely unlucky to see one fall exactly on your server 🙂

Interesting, I won’t take risks with all those meteorites falling from the sky haha

I also just the other day must have had a small meteorite enter my house, damaging my wife’s mobile’s lcd. Other than that there’s no explanation.