Amazon will release new Fire TV Sticks from time to time, and most are only mildly interesting, but the Amazon Fire TV Stick TV 4K Max brings two new interesting features with 4K AV1 video playback, as well as Wi-Fi 6 connectivity which should prevent buffering for higher bitrate 4K videos.

The new device builds upon the MediaTek MT8695 based Amazon Fire TV Stick 4K released in 2018, with a more powerful MediaTek MT8696 processor clocked at 1.8 GHz, more memory (2GB vs 1.5 GB), and the same 8GB of storage for the Android 9 based Amazon Fire 7 OS. Amazon claims the new stick is 40% faster, despite a frequency bump from 1.7 GHz to 1.8 GHz only, and MT8696 relies on Cortex-A55 cores (See comments), instead of the Cortex-A53 cores found in MediaTek MT8695, so the performance improvement probably refers to the faster GPU. 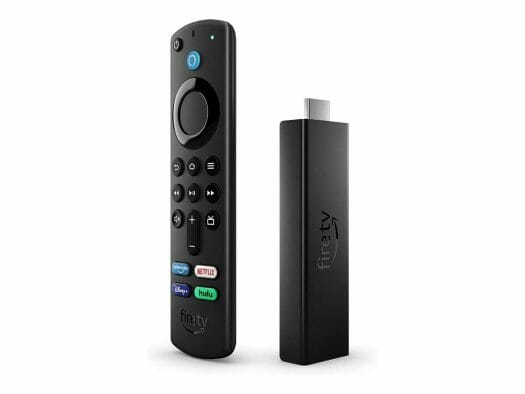 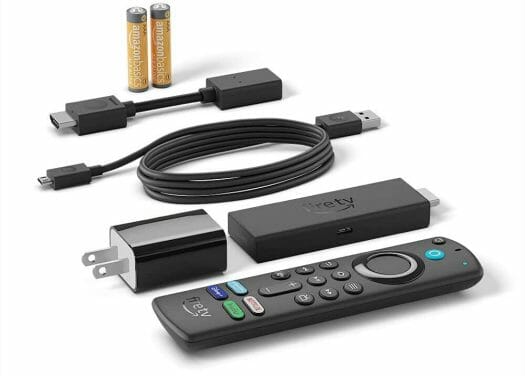 Amazon says their latest stick can stream videos from Netflix, Prime Video, Disney+, Peacock, and others, and live and free TV is available through SLING TV, YouTube TV,IMDb TV, Pluto TV, Tubi, and more. The price starts at $54.99 with default accessories, but the media streamer is currently out of stock. More details may also be found on the developer site.

I believe the new MediaTek CPU is using ARM Cortex-A55 cores, not A73 cores; and using Aida64 displays the CPU as having A55 cores, Aida64 isn’t infallible but I believe the app got it right this time.

I see. I could not find info about the cores on Amazon, so I relied on other media reports.
I’m not sure how Amazon find a 40% improvement by just switching from Cortex-A53 to Cortex-A55 and an extra 100 MHz in frequency though. Maybe they include other factors.

Marketing team probably got the internal testing specs and went with the highest number, cause I believe the GPU difference is around about 40% improvement going from the old entry level PowerVR 8000-series unit to the more mid-range PowerVR 9000-series.

Keep in mind that such tiny devices often have a very limited memory bandwidth that can severely impact preformance. The A55 has a much better memory controller than the A53 and memory-bound workloads can sometimes be more than twice as fast. So this can contribute for a good part. And it’s possible that the amount of cache in the CPU also changed.

Amazon’s 40% claim is vague and not meaningful to most people, but is achievable in certain scenarios. Probably related to the GPU. 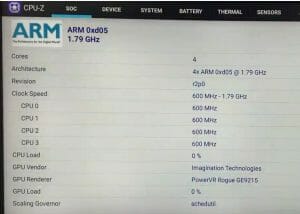 AV1 is a nice addition, something they didn’t emphasize at all until they edited their developer page at the last moment. AV1 is now mainstream. The extra 0.5 GB of RAM should be helpful for stuff like sideloaded Kodi. I remember using it on the 1 GB stick and needing to relaunch the program if I went to the home screen even on accident. I think the same happened on the 4K model with 1.5 GB, just less often. 8 GB of internal storage is the only stinker in the specs. They definitely could have added 16 or 32 GB,… Read more »

Not sure why a fire stick would need more than 8gig flash. It’s not like you can play games or save video files on our anyways. These are made for streaming, and streaming’s what their do

You absolutely can play 3D Android games or emulators on it. Performance exceeds the Raspberry Pi 3B+. Amazon should have games available for download with a few clicks.

The 8 GB of flash is effectively 5.5 GB due to the OS and other apps. Each major app can be caching hundreds of megabytes easily. Kodi can probably take up gigabytes if you just let it accumulate data.

Exactly, all the commentators needing more higher specs, it is endless.

If they want a device with their demand for higher specs then they are free to develop and make it themselves.

The firetv stick 4k max as it is, is near perfect now for streaming.

That’s a lot of reaction in defense of Amazon cheaping out and not including another $0.50 of NAND.

We’re also free to complain about Amazon’s gimped products, and to not buy them. Feel free to get annoyed about it more.

Another option would’ve been to add a microSD card slot, but alas, Amazon doesn’t seem to like adding memory card slots to its products.

I guess you don’t own a Fire TV stick? I have Netflix, Emby and a couple of other things installed, in addition to everything else that comes pre-installed and I have less than 2GB free. Flash memory, be it eMMC or an SSD, doesn’t perform well when filled up too much, so you want to try to keep at least 500MB to 1GB free on an 8GB drive for it to perform well.

Seems these are listed at Best buy or a Target near you, Target says 6 are available, Best Buy says it’s in stock, but if you order on Amazon it may or may not be av.

I don’t know what retail stores will do, but I would not buy the Max right now. It will probably go on sale starting around Black Friday, cutting that $55 price down to something a bit more reasonable. From then on it will be on sale multiple times per year.

I have watched the online reviews and seen emulation console gaming and gaming on this fire stick, some rate it just faster for games than a S905X4, due to the GPU. Chigz reviewed one ( physicaly had on ) with negatives of only 8gb, no expansion/USB ports and no google play.

Yes the PowerVR Rogue GPU is faster, not a gamer myself, but I’d rate the GPU on par with the mid-range ARM Mali-G52 MP2-to-MP4 compared to the S905X-ng entry level Mali-G31 MP2. My nitpick with the software is that the kernel is compiled as armv7l and not armv8l. The Vulkan driver needs more optimization, can cause crashes if app is trying to utilize Vulkan to the max, maybe it is the kernel causing the problems. After some debloating and turning Zram on, I was able to get higher AnTuTu benchmarks scores then what I’ve seen from YouTube reviews. AnTuTu Version… Read more »