ODROID-N2+ was launched in July 2020, but I only got the Amlogic S922X Rev C SBC recently with Hardkernel wanting me to test their latest Ubuntu 21.10 image with the Panfrost open-source GPU driver.

Let’s start by checking out the kit I received from the Korean SBC manufacturer. 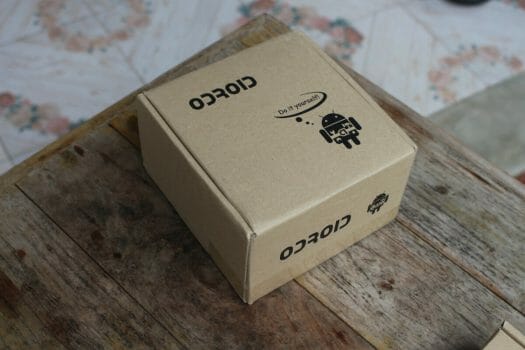 The package includes ODROID-N2+ single board computer fitted with a 32GB eMMC flash module, a 12V/2A power supply with an EU plug adapter, an 80mm fan kit, and a USB 3.0 to eMMC reader. 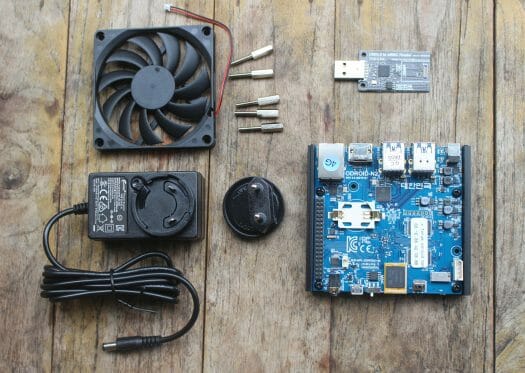 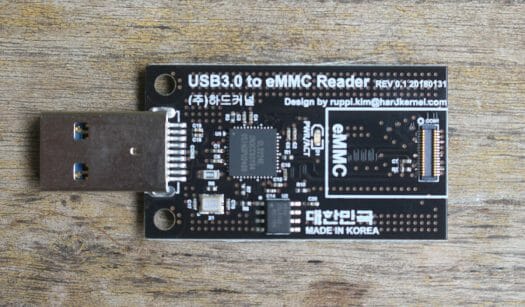 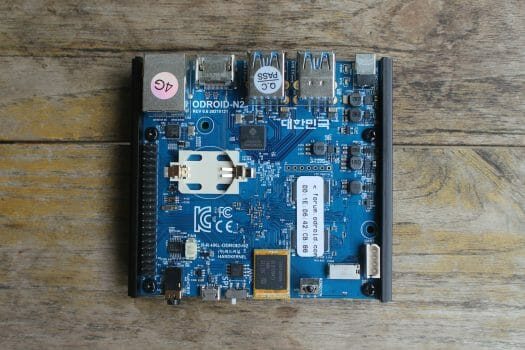 ODROID-N2+ is now only available with 4GB RAM, as the old ODROID-N2 with 2GB was deprecated, and we get four USB 3.0 ports, HDMI 2.0 video output,  Gigabit Ethernet networking, and a 40-pin GPIO header with the board cooled by a larger heatsink attached to the bottom of the board. 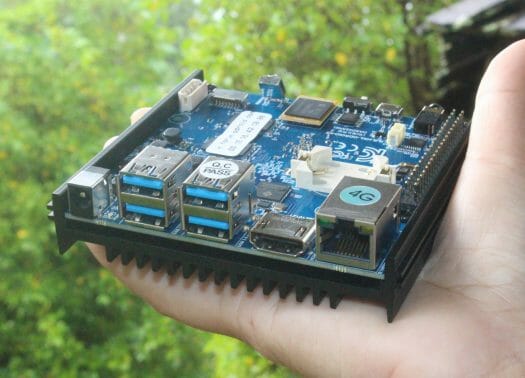 As we’ll see below the fan is not always necessary, but since I got one, I installed it on top of the heatsink using 4 of the 5 spacers provided. 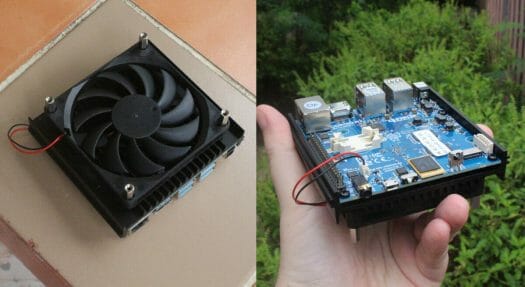 So no we get a board slightly elevated to provide better airflow for the ultra-quiet heatsink that shipped with my board. Since Ubuntu 21.10 is pre-installed on the eMMC flash that come with the board, I could just connect Ethernet, HDMI, USB keyboard and mouse, a USB 3.0 hard drive, and the 12V/2A power supply to get started. 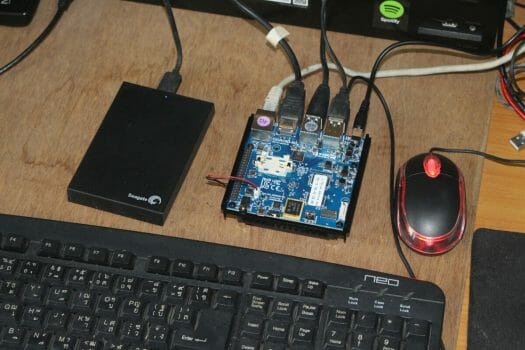 The board is completely silent most of the time since the heatsink will only start if the temperature goes above 65°C, and when it did start under load, I could not hear it, and I had to lift to board to check the fan was indeed spinning. Back to our first boot.

The board is working fine, and the vertical lines are just due to my broken LG TV. The log prompt shows Hardkernel user, and we can login with odroid password, but when we’ll use SSH later we’ll find out we need to use odroid/odroid, as Hardkernel is just the name for odroid user….

Let’s check out some system information:

We can get more details for inxi, including confirmation Panfrost open-source GPU driver is used in the Ubuntu 21.10 image:

The audio part is also interesting with the new PipeWire audio/video server running alongside the more traditional ALSA and PulseAudio.

Let’s run some headless and graphics benchmarks on the board.

No throttling was detected, and I could not hear the fan, but it was most likely triggered based on the temperatures reported:

Despite not being that loud, my laptop fan would overwhelm the noise from the ODROID-N2+ fan, so it’s barely audible. Note that the fan was only triggered during the more demanding multi-threaded 7-zip benchmark, and most of the time it is not activated. The test occurred in a room with a 28°C ambient temperature. 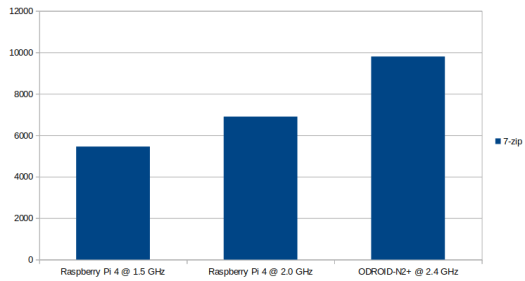 For reference, the ODROID-N2+ is still significantly faster than a Raspberry Pi 4 overclocked at 2.0 GHz.

Since Panfrost support is one of the highlight of the Ubuntu 21.10 image for ODROID-N2+, let’s double-check i’s needed enabled with glxinfo:

That Panfrost with Mesa 21.3 development branch. The output from glxinfo is rather long, so I’ve included it a pastebin.

Now time for the usual es2gears and glmark2-es2 benchmarks.

es2gears can easily run at 60 fps in full screen mode 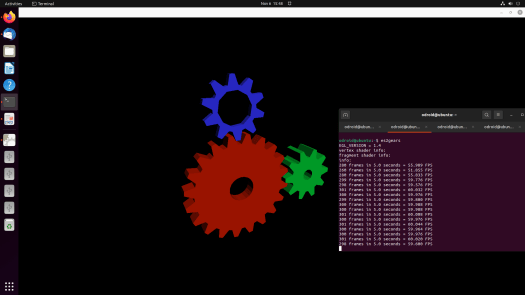 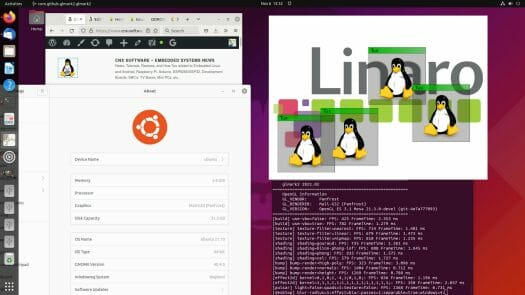 The is the output from the onscreen test:

The glmark2 score is 979 points. A few years ago we wrote about the same test with ODROID-N2 running Ubuntu 18.04 + Gnome3 + Linux 5.0 on top of Wayland with GPU drivers from Arm. The score was 1,119 points. That was two years ago, a lot must have changed, but it appears the open-source driver might be a little slower than the closed-source driver. I can also see Panfrost relies on OpenGL ES 3.1, while the Arm driver used OpenGL ES 3.2.

I also tried the benchmark in offscreen mode:

The score is lower, which does not make any sense to me.

I’ve tested some of the supported features of Ubuntu 21.10 on the board to see how well it would work as a desktop machine:

You can watch the video below.

In summary, ODROID-N2+ is fast for an Arm platform. For perfectly smooth video playback in YouTube better use 720p at this time. Firefox uses H.264 video decoding limited to 1080p, while Chromium supports up to 4K using VP9, but it’s unwatchable. The WebGL aquarium demo renders at 16-17 fps in Firefox with 500 fish, but only 3 fps in Chromium, probably because GPU acceleration is not supported/enabled? SuperTuxKart plays OK in full-screen mode, but it’s not as smooth as I would like. I tried Super Mario Sunshine in the Dolphin emulator, and it worked very well.

I had an issue with white text on white background in the Dolphin emulator, and the workaround was to switch to the dark theme in Ubuntu’s Appearance Settings.

I also wanted to play 4K video with other programs and command-line utilities, but I could not install Kodi:

VLC would just show a black screen with audio playing fine, and the command line tools listed in the wiki namely kplayer and c2play were not installed, and I did not manage to build the latter from source. I asked Hardkernel yesterday morning, but I still have received an answer, and I’ll update the post if there’s a solution. I can see the download page still does not have Ubuntu 21.10 for download, so it may mean the image is still being worked on. Anyway, it’s very good we’ve come to a point where an open-source Arm Mali GPU driver is usable in a modern SoC.

It’s not an amazing gles2 performance. Rpi4 with the gpu overclocked performs quite similar on wayland. It’s on X11 that the n2 and the rpi4 sunk deeply…memory bandwidth.

As the author of c2play, I can state that it will not work on 5.x kernels. The reason is that mainline Linux uses V4L2 for hardware codecs. C2play is designed to use Amlogic’s 4.9 kernel codec interface.

Looks like you didn’t get the case. I originally didn’t order it either, but then I saw how clean it was and decided to upgrade. The case is two pieces which slide together from front and back and lock in place. There’s still access to all connectors, but the main board is protected from accidental contact.

A pity it was not part of the giveaway week 😛

Where can I get the software? Whats the URL?

I think they are probably still working on it because at the time of my review, it was not really ready for primetime, and I can’t see any download link yet either in the Wiki or forums.

Would you be able to perform an HDMI capture and video encode test?

I don’t have the board with me, but since it does not have HDMI input, I’m not sure how HDMI video capture would work.

There should be a frictionless way for the Internet to route unbroken TVs people routinely throwaway to anyone who wants one to replace their broken one. Not a pro-look to model functionality on a broken TV.