We’ve been listing Black Friday and Cyber Monday deals available internationally since 2014, going beyond the US-centric Amazon Black Friday deals for instance. So let’s do it again this year from the usual suspects like Aliexpress and Banggood, as well as direct deals from manufacturers. 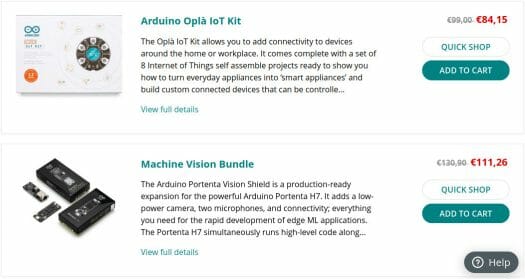 Khadas has an upcoming deal on the Amazon US store that will run for only 24 hours from 25th November 12:00 am to 26th November 11:59 pm (Pacific Standard Time). As I understand it, they ship internationally too, and you’ll be able to get 20% off the Tone2 Pro, Khadas VIM3 single board computer, and other products from the company. Sorry, no Khadas VIM4 at this time!

I always find Black Friday sales overwhelming on generic stores, and that’s the case with Banggood’s Black Friday Crazy Sale since they have way too many activities with some deals on items ranging from smartphones to clothes and more, as well as an “allowance rain” activity to get coupons,  a $9.99 snap up flash sales event, and more. As usual,l some of the discounts are probably exaggerated, so make sure to know the real usual price before going for a “60% discount” with photos of people smiling at you. The most relevant section may be the smart tech deals, but again I can see a lot of phones, tablets, electric bikes at this time. 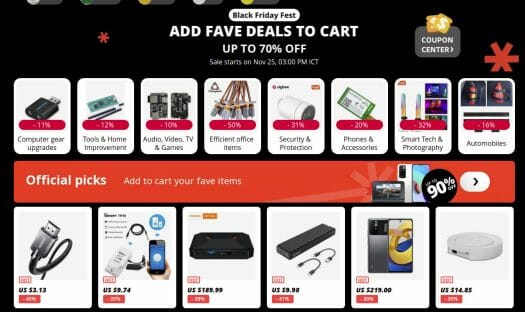 Aliexpress’ Black Friday Fest is also a complete mess, but the “add fave deals to cart” section looks to be the most relevant to the user prefernece, with for example in my case a Sonoff switch, mini PCs, 3D printers, computer accessories, a smartphone and so on. The best may be to search for items you are interested and check for “Black Friday Fest” to see if the product you want is elligible to a discount. 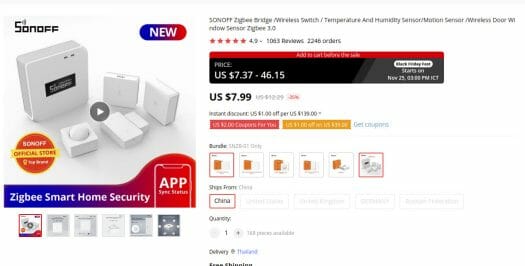 GeekBuying’s Black Friday early access event is easier to navigate with an early draw for coupons,  some flash deals, and discounts for various categories ranging from Smart Home to TV Box and Computers & Phones. There’s also the “GKB21BFBIG” coupon offering $20 on specific items.

We’ve reviewed several Reolink cameras in the past couple of years, and the company is now offering some Black Friday specials until November 29 or December 2 depending on the model and stock availability. 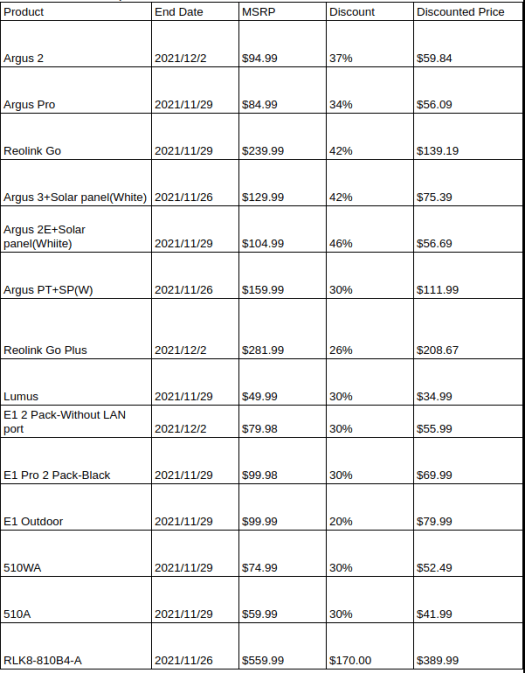 MINISFORUM is offering discounts on some of their AMD and Intel mini PCs as part of the company’s Black Friday Super Sale. Note that the company got some pretty bad reviews for some of their recent mini PCs, so you may want to check independent reviews of the model you are interested in.

25% off your next purchase in the HDfury store (mostly HDMI test equipment)
COUPON CODE: blackfriday

2-year subscription for one year price for the business plan for FlexClip video creation tool. https://fave.co/3kWr3g3

Firefly will offer 5% discount on all their products include the new Station Arm mini PCs on Nov 26-30.
https://amzn.to/3p1woDN

Also on the firefly.store site?

The announcement can be found @ https://bbs.stationpc.com/thread-229-1-1.html
They just link to their Amazon store.

Up to 20% discount on GL.iNET routers on Aliexpress
https://fave.co/3DQQPcR

RAKwireless BLACK FRIDAY sitewide sale to get 10% OFF on RAK products from November 25-30, 2021.
https://store.rakwireless.com/

Notably, the Raspberry Pi CM4 IoT router carrier board going for as low as $49.99
https://www.dfrobot.com/product-2452.html?tracking=snqbbMs0lddTvr3eSVRKmzR6PWWGRVs9bZLm6dbDWV7auVnyVbcFCdESMTPnwDyr

Up to 15% off on Arduino products at Farnell
https://fave.co/3nRGOGO

ITEAD offers $20 OFF on $99 orders and other discounts on Sonoff products until Dec 31.
https://fave.co/3HTUJEq

Ameridroid has discounts for selected items:

Up to 50% discount for Black Friday Raspberry Pi accessories and other electronics kits on Pi Supply @ https://uk.pi-supply.com/collections/black-friday

The Linux Foundation offers Cyber Monday deals with up to 65% discount on courses, bootcamps, workshops… until December 6, 2021.