We just wrote that Wiretrustee carrier board for Raspberry Pi CM4 with four SATA interfaces was canceled and made open-source hardware a few days ago, but the Axzez Interceptor carrier board is offering a solution that is somewhat similar with 5x SATA ports and designed for NAS, NVR, IoT, and Managed Switch applications. 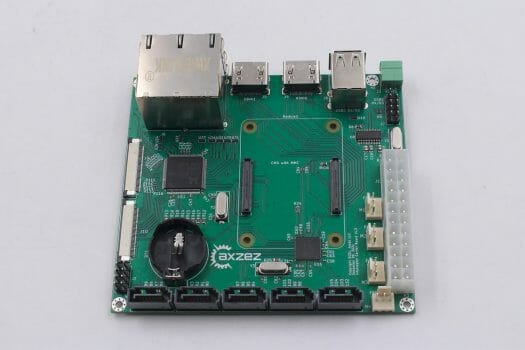 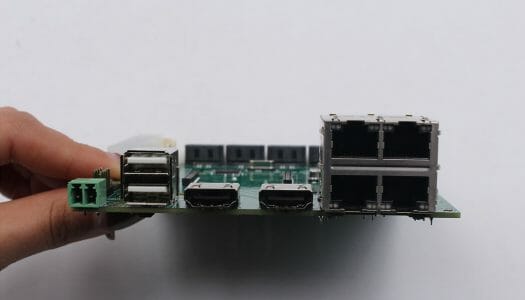 There will be some bottlenecks in this board just like with other Raspberry Pi CM4 designed for NAS, as the five SATA ports are going through a single 5 Gbps PCIe interface, and the four Gigabit Ethernet ports are connected through the Gigabit Ethernet MAC of the Broadcom BCM2711 processor.

Axzez provides a Raspberry Pi OS “Bullseye” image with all necessary drivers which can be downloaded from the company’s website. If you don’t like downloading a random OS image from the Internet, the company offers their kernel, modules, overlay, and software config, but for some reason, you’d need to contact them by email to acquire those. You can also ask further questions on their forum if needed.

I understand this is the first board from the company, and Axzez is taking pre-orders for the Interceptor carrier board for $99 with shipping scheduled to start in February.

This looks like a nice design. I’m sure the goal isn’t necessarily to use all I/Os at once, but for those looking for cheap 4-port routers or firewalls, it can get the job down, and for those looking for solutions allowing to have cheap storage, it works as well. Want to make a video server. Ditto. The price is decent enough that you don’t feel like you’re wasting your money on tons of unused stuff. I continue to think that the CM4 might be the smartest product that RPi has ever created because it allows their users to redefine how… Read more »

I agree completely. It’s nice to see that someone actually offers more than a single SATA port and that SATA is not connected via some USB interface!
Did you get your CX LX2 yet ? -I just ordered mine, will be here in a couple of months. 🙂

Yes I received them! It took 5 months for them to arrive (they were missing a connector, never knew which one), and they never notified me when sending it despite them saying every month “stop asking, we’ll notify you”. And DHL didn’t have my phone number to contact me to pay the VAT, and was waiting for me to contact them… But the boards are worth the trouble. They are impressively clean, well designed, and quite powerful. You’ll see that setting the board up requires some efforts (EFI boot loader etc). It’s possible to use a large heat sink and… Read more »

I’ll try sending you an email. You probably have the shortest email address I’ve ever come across. =)

> the company offers their kernel, modules, overlay, and software config, but for some reason, you’d need to contact them by email

As if some magic would be involved 🙁

JMB585 is known to work (obviously you need SATA/AHCI in your kernel).

The only two issues I see with this board is not the ‘single PCIe Gen2 lane’ bottleneck (totally OK for spinning rust) but the missing heatsink mounting holes around the SATA controller and the price.

You are correct, the JMB585 is supported upstream, but the RTL8367RB is not. We have integrated the realtek/swconfig drivers from openwrt into the official pi kernel to enable switch/VLAN config. I believe there is currently an effort to get a DSA driver mainlined for this switch. We will post the source code/patches on our website before the first boards are sent out. Our bullseye image also features other customizations like a boot menu to enable booting to the filesystems on the SATA drives. All of this will be open-sourced. The JMB585 has an epad and the heat is dissipated through… Read more »

Ah, ok. But if I only want a dumb switch (‘NAS at home’ use case) I don’t need any DSA drivers? Or in other words: in which state do the switch ports come up without any configuration?

Also thank you for the thermal info, I hope you tested potential data corruption issues with ‘checksummed’ filesystems under full load already?

Correct, if you don’t use any driver for the switch, it will just act as a normal dumb switch. We will post our thermal testing in Jeff Geerling’s github issue.

Thanks for your replies here. The RTC seems like a bit of a throwback; how long ’til energy harvesters of one kind or another, MEMS clock witchery, or NTP in boot can k.o. that battery on board real estate?

Also…RS-485 would be twisted pair serial like in POS networks? …what about MIPI, is that it on the white connectors on the left?

We originally set out to make the Interceptor for a different market, but then decided to split up the full board to allow it to be used by enthusiasts and tinkerers. In our original market the RTC is necessary for those that are on an isolated network and may not be able to take advantage of NTP.

Yes on the RS-485. No MIPI. The white connectors on the left are for future expansion, which hasn’t been announced yet as it is still under testing.

Just wondering, if the included RTL8367 switch capable of running VLANs? ( and configurable easily in Linux? ) or whats the purpose of running a switch on the only network port??

Yes, we have integrated the openwrt drivers to enable VLAN config. In additional, there are two expansion ports that connect to the RTL8367. We hope to announce the expansion board next month.

https://www.axzez.com/
“Your Browser Is No Longer SupportedTo view this website and enjoy a better online experience,
update your browser for free.”

Hello Jens Bauer. Would you please tell me what browser you are using? We are hosted by Wix.com, so we’re not doing anything special. I’ve tested the site on just about every browser and OS out there and haven’t had any issues, so I’m a bit surprised.

Sure. I’m using Firefox 28 (“Nightly”) on Mac OS X 10.6.8.
Note: I am unable to install any later version of Mac OS X.
The latest official version of Firefox is 24.
Though I could mention a lot of other browsers, it would probably not be fair to ask you to support them. 😉
Firefox 28 should not require too many changes to support.

Good move on using the JMB585; that’s what I’d have done, this allows a high sustained throughput and supports JMB575 port-multipliers (easily attaches up to 75 drives, which might be a bit crazy, but it’s good to go crazy sometimes). I’d like to know if the four GbE ports are connected via a single switch or if one of them is isolated from the others. My concern is, if one wants to use this board for making a firewall, during startup of the SBC, traffic will go straight through from the WAN to the LAN (making the LAN publicly visible).… Read more »

> I’d like to know if the four GbE ports are connected via a single switch or if one of them is isolated from the others.

Uhm, yes, …
“four Gigabit Ethernet ports are connected through the Gigabit Ethernet MAC of the Broadcom BCM2711 processor”
… however there’s still a chance this can be used as a router, if the switch is turned on by the Linux driver and not on powering up the board.
-I’m not holding my breath though – but at least the board can be used for a NAS.

Why would there be a switch fabric that isn’t the CM? Good on you thinking there are Bluetooth and other low power wireless fabric to service somewhere though ….I guess there are hats that stay away from the heatsink bits…? All down to who wants WiFi6E antenna hobby wizardry (well, maybe not the tomography) and who wants a network of mass registering terra cotta flooring, or where.

I don’t use any wireless anywhere in my home.
The ISP’s box has an 8P8C connector, which I plug into my router/firewall, but thought it might be worth replacing that with the Raspi.
… One can of course solder 4 relays in series with the 4 wire-pairs connected to the WAN, to flick it on/off programmatically; that way, it can ensure that there’s no direct access to the LAN from the WAN while the switch is ‘booting’.. 😉

Will Cnx software be getting one to build and test?

Hi Guys, I too am interested in this board, yes i have seen the JMB585 is supported upstream. However my concern is the RTL8367RB which is not in 5.16rc8 at least, nor next at this time (yes I see references in the code to it in both src trees but the code says it will probbaily not work as the code is tested for RTL8365MB-VC. (take a look thier name is at the top and they say the code is only tested on the RTL8365MB-C as thats all they have so might be worth seeing if they take a look… Read more »

Just a note on all this, if the board becomes popular, this can accelerate mainlining of the missing drivers. Maybe that will not be compatible with your expected usage time frame but it could be possible that in a few months from now all these points are properly addressed since they sound like quite reasonable expectations.

Any word on shipment?

The first production round has already gone out to customers and most have received their boards. The second production round should still arrive by the end of March. There was a COVID outbreak in Shenzhen, China that may have an effect on delivery, but we don’t yet know. We’re still hoping the boards go out this coming Friday (to us) and then we’ll send them out after fully testing here (in Indiana).

They’ve now made a 1U enclosure for the Interceptor board with support for up to 5x 2.5″ or 3.5″HDDs/SSDs.

And what’s the use case for this thing? Only dumb video surveillance if the enclosure can be equipped with 2 PoE boards providing up to 16 Fast Ethernet PoE ports? All bottlenecked by the single RGMII connection to the CM4 and the single PCIe lane to storage?