I discovered JetHome Jethub D1 and Jethub H1 Linux automation controller based on respectively Amlogic A113X and S905X SoCs in Linux 5.16 changelog, as both platforms got upstreamed to mainline Linux.

I had never heard of JetHome, a Russian company based in St. Petersburg, nor their products before. Both Jethub D1 & H1 will run either an Armbian-built Ubuntu operating system or Home Assistant Operating System (formerly HassOS), and support Home Assistant (Z2M), Home Assistant (ZHA), and ZIgbee2MQTT. Jethub H1 looks like a TV box with a Zigbee module, while Jethub D1 is a DIN Rail automation controller with plenty of I/Os. Let’s focus on the latter. 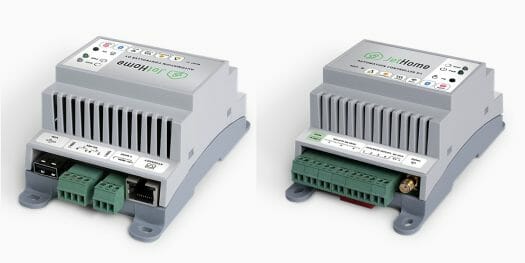 There’s a detailed Wiki in English and Russian that shows how to get started using Armbian Ubuntu, Home Assistant, Zigbee2MQTT, and so on.  The controller is designed for automation systems that gather sensor data, perform PLC functions in smart home systems, direct load control, and so on.

JetHome recommends the 512MB/8GB model for Zigbee2MQTT “on the go” or Home Assistant in a virtual environment, while the older model with 1GB RAM/16GB flash is suitable for Home Assistant with addon system support.

JetHome JetHub D1 is sold for $57.75 (512MB RAM) and $83.47 (1GB RAM) plus shipping, which seems incredibly inexpensive for this type of hardware. One of the reasons for the low prices is that the company does not provide 3rd party software support (e.g. Home Assistant, Zigbee2MQTT..), so you’d have to solely rely on the information in the Wiki or your own knowledge. If you’re just interested in a Linux-based Zigbee, Wifi, Bluetooth, and Ethernet gateway without I/Os, JetHome JetHub H1 is sold for $51.32.

In product page I see detailed and quite positive youtube review, bunch comments from buyers and even answers from developers regarding some schematic decisions.

Also according to comments company have Telegram channel with helpful community.

Hi! I’m CTO of the ujin.tech company. I’ve got one оf first JH D1 devices from the test batch (20 pieces). Also I’ve conversated a lot with CEO of JetHome company about technical solutions and plans. It’s amazing company that makes great devices and I like it very much! My feedback about small bugs that I found working with test unit was accepted and everything was fixed in few days! At the moment I have one JH D1 as main smart home controller at home. I setup one H1 at my father’s home smart home controller. About an hour ago… Read more »

any chance you guys know how to get one shipped to the Netherlands?

I’m founder of the JetHome.

We offer international shipping by EMS.