SmartCow Apollo is an audio/video AI engineering kit based on NVIDIA Jetson Xavier NX computer module designed for applications with conversational AI capabilities, such as speaker recognition and sentiment analysis. But considering a camera is included, computer vision applications should also be possible.

The development kit comes with a 128GB NVMe SSD, four microphones, two speaker terminals, two 3.5mm phone jacks, an 8MP camera module, and a 2.08-inch OLED display with everything housed in a frame that keeps the module and accessories like that camera upright. 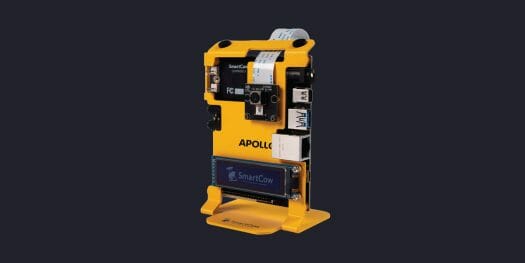 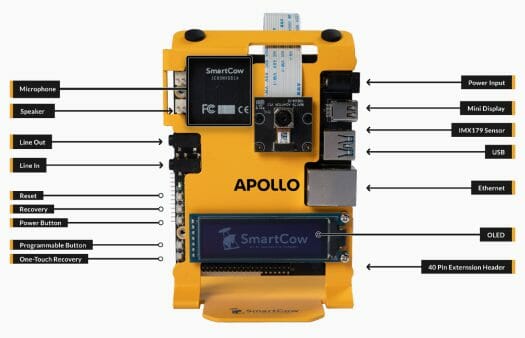 The development kit supports NVIDIA’s JetPack, DeepStream, and RIVA on Embedded SDKs, all of which are pre-installed on the 128GB SSD provided with the kit. I’ve heard of the first two, but I don’t think I ever read about the Riva on Embedded SDK, probably because it’s distributed via an early access program, and requires the signature of an NDA.

Nevertheless, the Riva on Embedded SDK is designed to help developers use Jetson hardware to build conversational AI applications such as chatbots and virtual assistants “that leverage RIVA speech skills and deploy them on the edge”. SmartCow team provides several demos with the kit including text-to-speech and sentiment analysis, language translation, and others. Speaker recognition, not to be confused with speech recognition, and sentiment analysis are showcased in the presentation video below.

You’ll find everything to get started on the documentation website. They may have limited stock initially, as currently, it’s only possible to express your interest and/or pre-order the kit via a Google Form. Shipments are scheduled to start on April 8th.