Orange Pi 4 LTS is a cost-optimized (and availability-optimized) variant of the Rockchip RK3399 powered Orange Pi 4 single board computer that was introduced in 2019 with 4GB RAM for $49.90 and up. 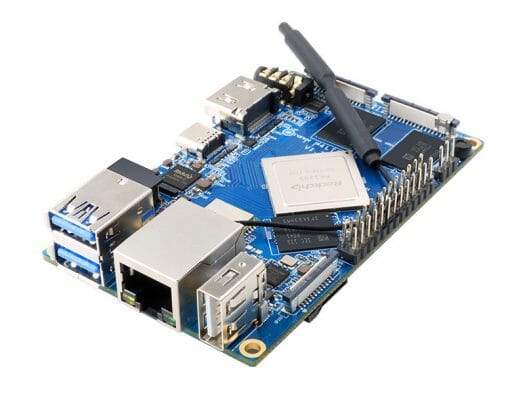 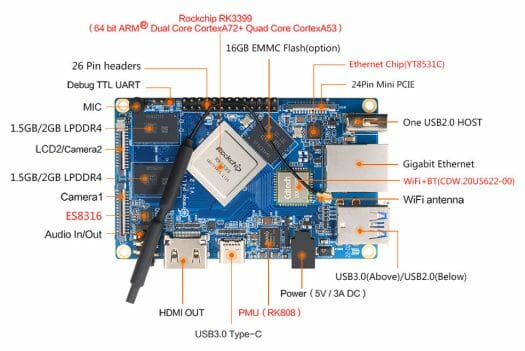 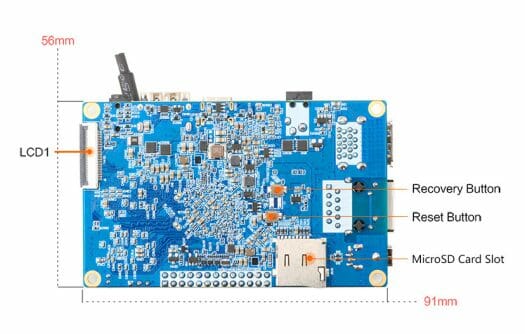 As we can see from the specifications, there were also other less noticeable changes, with the Realtek ALC5651 audio codec replaced by an ESS ES8316 codec (everything made by Realtek seems out of stock these days), and the 40-pin GPIO header has been shortened to a 26-pin header apparently because the board is now using two RAM chips instead of just one, and extra space was needed.

The company will provide Android, Ubuntu, and Debian images that should be available on the Download page together with some PDF documentation (datasheet, getting started guide…), but I’m not sure if it’s already available since the website won’t load for me today…

The original Orange Pi 4 SBC is supported by Armbian with a Debian 11 “Bullseye” headless image and a Ubuntu 20.04 “Focal” image with XFCE desktop environment. I’d expect the Armbian images to boot on the new board, but Ethernet, WiFi, and the audio jack should be checked since they may rely on drivers that are not present in the image or supported in Linux 5.10.

The company is now taking orders for four models:

You can purchase those on Amazon or Aliexpress. With the shortage and high price of Raspberry Pi 4 SBC, Orange Pi 4 LTS could make an interesting replacement, with Rockchip RK3399 a mature platform mostly supported in mainline Linux, as well as performance roughly equivalent, except for some specific tasks, where RK3399 may be significantly faster (e.g. AES encryption). The downsides are that, depending on your application, you may need to change the software quite a bit, and the board is not fully mechanically and electrically compatible with Raspberry Pi 4.

Is the pcie an fpc connector?

Sad thing is they could have eliminated the useless wifi and instead kept the GPIOs or maybe add an m2 or something else useful for pcie.

Board real estate usually is just an excuse as in any case it seems not 100% rpi compatible.

Yes, but they have a mini PCIe adapter board: https://www.cnx-software.com/2020/01/06/orange-pi-4-4b-pcie-expansion-board-mpcie-socket-sim-card-slot/
I don’t think they’ve ever made an M.2 expansion board.

About size… I think they wanted to keep the same size for compatibility with the original Orange Pi 4, since many of their potential customers may already be using the older board.

Yes, the pin out its okay. But an m.2 would be a lot better than that pci implementation. I heard it only reaches pci 1.0 speeds even. Also, why still 5v only.. that’s not a good idea. I had power issues constantly with the former opi 4

Maybe once this supply issues are gone I will find what I really want. Seems I’m a complicated patient…

I would never do same mistake and buy a board requiring more than 2 amps on power input.
It is better to go with Radxa. You can even feed their boards with dummy (non QC) adapter up to 20V (PD max voltage). I run Rockpi X and Rockpi 4 boards like that for months.

Let’s see, $65 for an ancient rk3399 paired with 4GB of RAM or $79 for very decent rk3588 with also 4GB of RAM…who else can’t decide between those two? I hope we see a rk3588 low cost board before 2024 from orange pi, otherwise those prices are not attractive anymore. They became pretty famous because they had decent boards for $15 back then, now no low cost board from almost any maker is attractive, I know it’s not their fault but that’s what it is. When we go back to the prices we had before 2020 with slightly adjustments as… Read more »

How if the BOM costs are simply too high?

Wrt the $79 for Rock5… I hope you realize that this is just some marketing BS? $129 is the announced amount of what Radxa wants to charge eventually and if you add shipping and VAT/taxes you’ll get a number that might let you think about x86 instead. Especially if you want to run the thing with Linux and not Android since ‘Linux on ARM pretty much sucks’ [TM].