If you need to control or debug multiple devices over UART devices, you’d be glad to learn WCH has just launched the CH348 USB to serial chip with eight UART ports.

Two models are offered CH348L in an LQFP100 package and CH348Q in an LQFP48 package. Both offer eight UART interfaces, but CH348L comes with more CTS/RTS and DTR/hardware flow control signals, as well as DTR, DCD, RI signals, and support for independent voltage for I/Os. 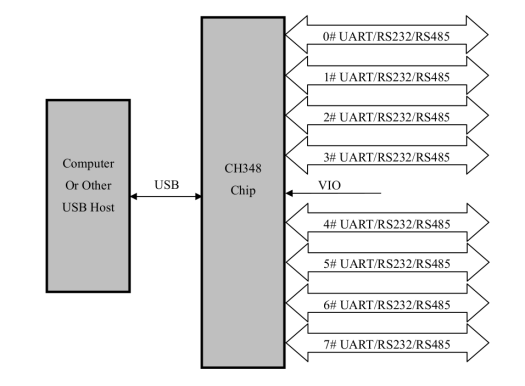 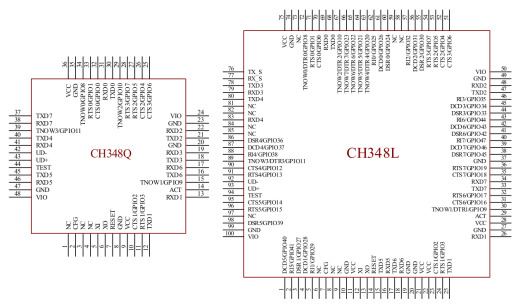 WCH says serial terminal applications under Windows can work without any modification, so I suppose the same must be true under Linux, where the USB device just enumerates eight serial ports. Developers only using the Tx/Rx signals and no hardware flow control would have up to 48x GPIO to play with, so it might be quite a versatile chip for USB to UART, RS232, RS485, and GPIO.

The good news is that WCH shared the documentation on Github, but they did so in a weird way since they are just updating a zip file with all datasheet for CH34x chips as they get released, instead of having a directory, and commit new files or revision as they come by.

Sounds like a relatively cheap way to build a simple multichannel lorawan gateway… If the ports and gpio are mapped 1:1, that is.

@andelf said: “Sounds like a relatively cheap way to build a simple multichannel lorawan gateway… If the ports and gpio are mapped 1:1, that is.”

The problem with that approach is you end up with a bunch of co-located cheap LoRa modules (e.g. SX1276-based UART/868MHz or 915MHz) each with it’s own antenna interface and no efficient way to combine/divide the RF amongst them to/from a single antenna. A proper LoRaWAN gateway is much more expensive (over-priced IMO), but it doesn’t have that problem.

Nice IC. Someone knows if is it possible to control extra pins from python as pyserial?