SolidRun has launched the LX2-Lite SOM based on NXP Layerscape LX2-Lite SoC with up to 16 Arm Cortex-A72 cores, together with ClearFog LX2-Lite development platform equipped with two SFP28 cages up to 25Gbps each, two SFP+ cage up to 10Gbps each, and eight Gigabit Ethernet RJ45 ports for networking applications.

With a footprint measuring just 58 x 48mm, or about 25% the size of a standard COM Express 7 module, the company claims the LX2-Lite Mini SOM, based on LX2162A, is the smallest 16-core SOM platform in the world, and the module and development board target high-performance SD-WAN, network security, and industrial control solutions. 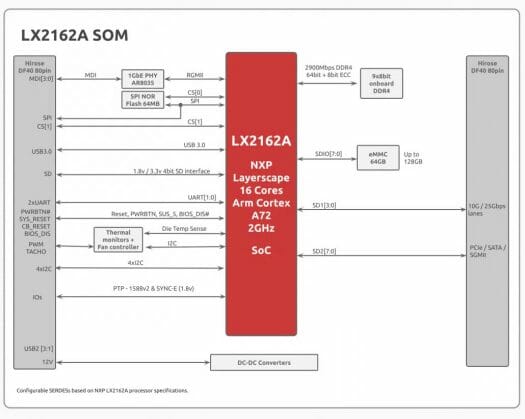 The module was previously introduced in August 2021 as the SolidRun LX2162A SOM, as a more compact and cost-optimized version of the company’s COM Express Type 7 computer-on-module based on NXP LX2160A 16-core Arm Cortex A72 communication processor with the differences between the two summarized in the table below. 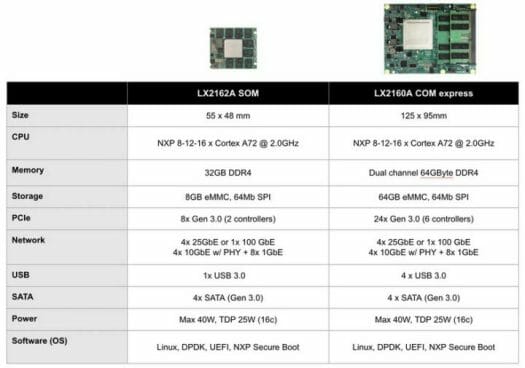 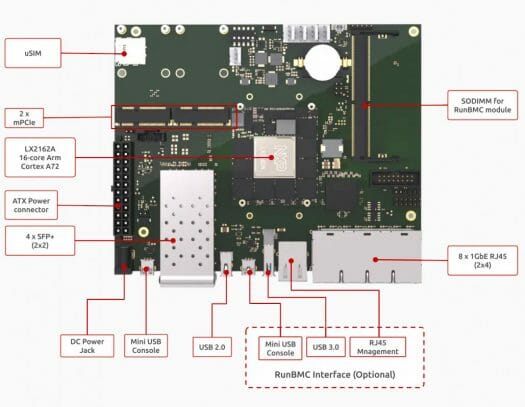 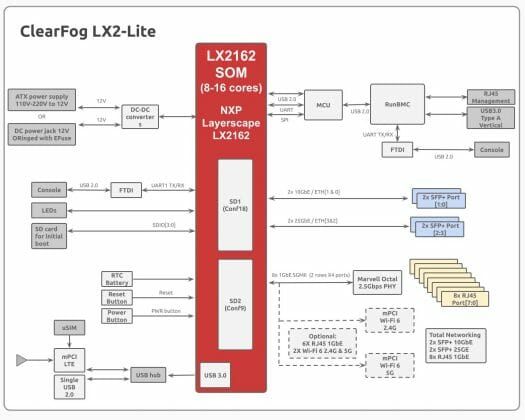 While pricing for the SOM has not been determined or made public yet, the ClearFog LX2-Lite development platform is available now for $870 with 8GB RAM and $1,197 with 32GB RAM. Both kits ship with the ClearFog LX2162A carrier board, LX2162A SOM, a 12V/1.5A power adapter, a 16GB MicroSD card as well as a heatsink and fan

More details can be found on the product page and press release.

A 18W power brick for something where the SoM is already labeled ‘Max 40W’?

They’ve been all over the place on power since the Honeycomb board first came out. I really wanted one and got in contact with SolidRun, and they couldn’t tell me what the power draw was. I was even speaking to one of their hardware engineers. It was very strange. It’s almost like they subcontracted out the project to another company and had never seen the board.

Also the price is just totally out to lunch. The original board is still $750, and they just RAISED the price on the ancient 4 core MacchiatoBin board.

Wow, I had been considering ordering a Clearfog CN9130 to replace my old clearfog and have something more up to date in my computer bag, but indeed its price has exploded ($301), that’s not an option at all anymore!!!

I noticed it as well this week-end on their site and I think it’s a nice addition to the Clearfog family. I’m quite surprised by the choice of splitting the SFP+ in two groups of 10 and 25G instead of using 4x25G that the SoM supports. Another point, if you look closely, the baseboard uses 2.5G PHYs for the GbE ports, while the SoM is limited to 1 GbE. I suspect they intend to later reuse the same baseboard with future SoM that might provide other options.

So the 8 core version is like a RPI4 on super steroids.

That’s an impressive price point for the specs. It’ll be interesting to see what operating systems are supported.

Pretty sure these will be the same as on the Honeycomb. Currently running ubuntu 20.04 on mine, and it’s fully functional on 5.10-mainline+44 patches for the 10G ports, which is extremely reasonable!