SolidRun LX2162A SOM is a compact (58x48mm) system-on-module based on NXP LX2162A 16-core Cortex-A72 networking processor and equipped with up to 32GB DDR4 RAM that’s 25% of the size of the company’s earlier COM Express Type 7 computer-on-module based on NXP LX2160A 16-core Arm Cortex A72 communication processor and found in ClearFog CX LX2K networking board.

The much smaller size has been made possible by replacing the SO-DIMM sockets with soldered RAM, and switching from LX2160A to LX2162A SoC with similar features, but offered in a 23x23mm package that is nearly one quarter the size thanks to a reduction of the number of SerDes and PCIe interfaces, and manufacturing with a 16nm FinFET process technology. 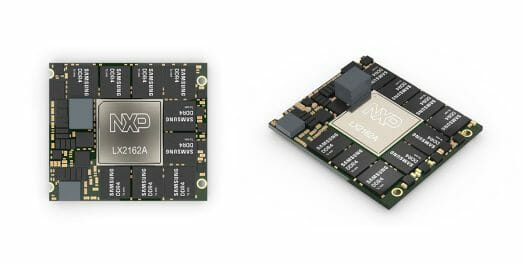 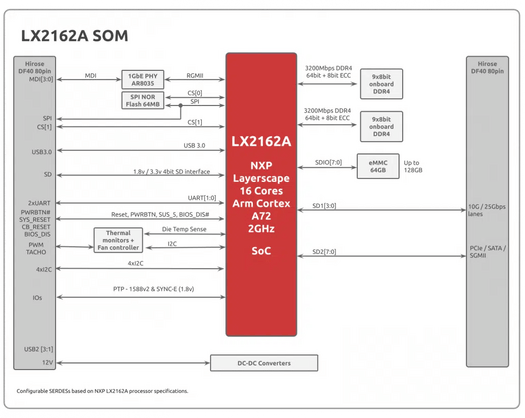 Just as a comparison in terms of CPU performance, 16 Cortex-A72 cores  @ 2.0 GHz and 32GB DDR4, is roughly the equivalent of four overclocked Raspberry Pi CM4 modules (50x44mm) with 8GB RAM, but done in a way that takes less than a third of the area. The comparison stops here, as the two modules target completely different markets with the SolidRun module designed for 5G base stations, high-performance CPEs, storage controller, network security, and data routing.

Solidrun is also working on the ClearFog LX2162A half-size mini-ITX carrier board for the module with two SFP28 ports (25GbE each), two SFP+ ports (10GbE each), and eight Gigabit Ethernet RJ45 ports, as well as a USB 3.0 port, and a VGA output to connect a monitor.

Considering we only get renders for the LX2162A SOM, and nothing to show for the carrier board, I don’t think the module is available right now. Eventually, more details should surface on the product page.

Just one question, how are you supposed to cool this thing?

Yeah that big gray blob seems to make it imposible to cool.

Is it a VRM or something?

Nope since the RPi ‘features’ ultra slow memory access which at least the LX2160A (on HoneyComb LX2) doesn’t suffer from. If the LX2162A is similar in this regard to the bigger LX2160A then depending on use case this thing (proper cooling assumed) might outperform even six to seven RPi 4. Real world performance not silly kitchen-sink benchmarks that run solely inside the CPU caches.

In addition to what you said, the benefits of a single system image versus multiple ones are important for many applications.

32GB is infinitely more flexible than 8GB x 4 across a network. ie if you run ProxMox on two of these then you can create 8 7GB guests leaving 4GB for each host node.

If you keep 4GB for the host nodes with 8 RPi4 boards then you can at best produce 8 x 4GB guests. Ok you have more redundancy with the Pi’s but you also have more failure points, more systems to admin, much higher guest to guest latency, more cables and power supplies, more rack space…

Wonder what the price will end up at ?

This would make nice compact Arm-native workstation / compile farm. Only problem is the lack of consumer peripheral interfaces.

Single-threaded performance IMO a bit too low for this. While multi-threaded CPU horsepower is comparable to a Core i7-9750H (6C/12T, boosting at 4.5 GHz) or an Apple M1 (4/4 power/efficiency cores maxing out at 3.2 GHz), single-threaded Apple’s power core is 2.5 times faster and the Intel thingy almost twice as fast.

Yeah that was my criticism of the honeycomb lx when it first launched. I faced a lot of anger on this forum for voicing that opinion, lol. The only ARM platform competitive with the M1 for single thread that’s available to consumers today is Ampere, ie you can use cloud instances and pay by the minute. So yeah the M1 is a good option if you have the patience and morals for McOS products.

There are also AWS’ c6 instances which are awesome. Just like Ampere, they’re based on ARM’s Neoverse-N1 cores with extreme memory bandwidth and connectivity.