“Turing Smart Screen” is a low-cost 3.5-inch USB-C display that connects to systems with a USB port, and works with Windows, Linux (including Raspberry Pi), MacOS, and other operating systems that support Python3.

But contrary to my initial assumptions, it does not exactly act as a second monitor, and instead, it is an information display, originally designed to show resource utilization, e.g. CPU and memory usage, in Windows, and controlled through commands send to the USB port. 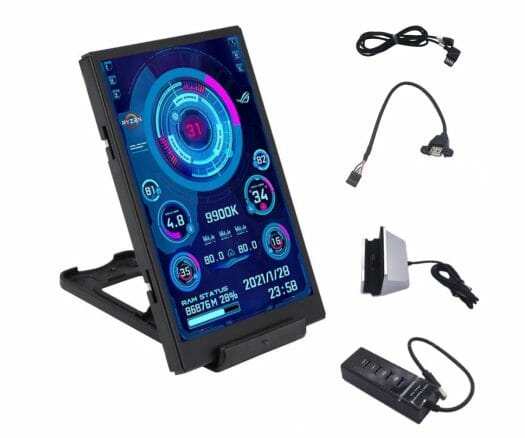 The manufacturer says it works with Windows only using its own software, and not AIDA64. The Windows software features functions to change the theme, adjust brightness, display the weather forecast, and so on. (Also see mirror download link on MEGA) 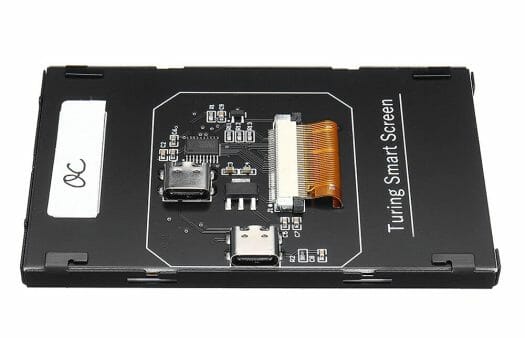 It’s only after trying to findout which USB display solution it used that I discovered the CH522T MCU and the name “Turing Smart Screen”. If it’s just receiving commands over USB, it should be easy enough to reverse-engineer with a USB sniffer, and Matthieu Houdebine has already taken care of that with the “Turing Smart Screen Python” project hosted on Github. The Python 3.x implementation means it works in Windows, Linux, macOS, and other operating systems that support Python 3.x.

The display is shown as a serial device in the host system, and the open-source software can display a custom picture, text, and a progress bar, as well as clear or turn off the screen, reset the display, and set brightness, but screen rotation is not implemented yet.

The display ships with a one-meter USB Type-C cable, a stand, and double-sided tape, plus other accessories like a USB hub, depending on the selection option. I initially found it on Banggood for $35.99, but it is also sold on Aliexpress, Amazon, and other shops.

Would be a much better product if there was a switch on the back, allowing it to become a DP Alt Mode display on the fly.

They *could* have done that, but it wouldn’t have cost $35. The fact that it’s running an 8051 tells me it was built for cost. The wholsale price of the chips needed for that Display Port functionality exceed the retail price of the display.

Interesting. It looks well suited to displaying off-screen notifications/logs/emails etc to avoid distraction. I used to do this 30 years ago with a 2×40 HD44780 (displaying BIOS calls by then).

I don’t know how fast it works, but it would be more convenient to write a frame-buffer driver for it and use it as a regular screen. The control looks simple enough (command, arguments and data).

The link to amazon seems to be for a different device.

This also reminds me of a small serial usb screen that I purchased 10 years or so ago.
Still have it somewhere. Pertelian was the name.

It is sad that people had to reverse engineer the driver, and the vendor doesn’t care.

Personally, for a sidekick display I use an old tablet on a stand, connected 24×7 to its charger, to WiFi, and to its own specialized 800×480 VNC session on a server. Connecting to the same VNC from elsewhere, I can launch various software there and that way control what is displayed on the tablet.

Some people have old phones around, or even new ones. Might catch on as a new smartphone feature 🤔

Why New? There are many different Software Tools which User a Smartphone or Tablet aus Side Display. Duet Display aß one Software example.

I bought one and it had a flaw in the software that exposed its underpinnings. Apparently its using a front end that hides the fact its taking stats from an unlicensed business version of Aida 64 which is hidden in the software required to run the device. Bc of the error on my computer it exposed the full Aida 64 gui but none of the tools worked on it. Just the hardware monitoring parts. It also polled my computer about once a second and everytime it did locked up my computer for that same time period. I Uninstaller the software… Read more »

It uses Open Hardware monitor and doesnt work with Aida64 as of yet, the Aida devs do not have the SDK for the device.

The only other piece of software (apart from the python scripts) I have had it working with is called Simhub (for driving simulators).

I’d take a look at your system as something that is locking up your PC once every second must be terrible, I on the other hand have had no such issues nor have I seen anyone else with the device experience any.

I have an energy management business that does some integration work, you interested?

Look bottom in the “I made it” section. I modified the original code, to work with librehardwaremonitor, and several widgets and posted source from my repo.

8051? I remember playing with those in our embedded software lab 25 years ago. 😀 I might even have a reference manual here somewhere…

Any direct links to a case? I am not finding a much through google results, I’m also a bit hesitant to order stuff that won’t work.

this product has a flaw. Does not read NVME and software it is not flexible to fix that. Tried to sind alternatives, found just one but i’m not familiar with programing python and external devices. Since I bought mine in aliexpress i am not waiting to them to give me support on this.

Here is my warning.

Am I able to get NZXT CAM on it?

Can i play a video with it putinf the video a in a sd card? how can i do it?

There’s no SD card slot.
This display won’t be able to show videos.

I got this that has a card slot. But I’m not sure I can play a video or just a background moving image