The RZ/T2M microprocessor also supports Ethernet with TSN and functional safety, and has been designed in such a way to reduce the number of external components in order to both decrease the BoM costs and the product size. 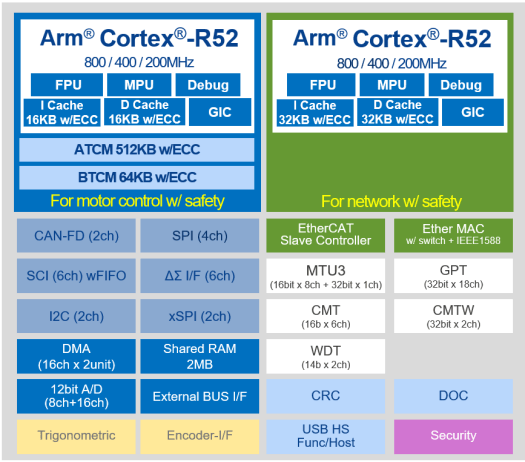 The Renesas RZ/T2M microprocessor can be programmed with the Eclipse-based e² studio IDE or IAR Embedded Workbench for Arm, and a “Flexible Software Package” (FSP) is also provided.

The company can also provide the Renesas Starter Kit+ for RZ/T2M (RZ/T2M-RSK) evaluation and development kit with the following highlights:

The kit also includes all necessary cables to get started.

The Renesas TZ/T2M MPUs and evaluation kit are available now with the latter going for about $440 US. More details, including extensive documentation and purchase links, can be found on the product page.

I’m always puzzled when seeing high-frequency real-time processors like this, with 2 levels of cache and with high performance I/O (e.g. 3*GigE). It’s probably not be easy to sustain the 1us accuracy, and that makes me wonder how long the distinction between real-time and application will be able to stand. I suspect that development rules will progressively include a wide number of constraints (such as low-lat unless network is flooded with broadcasts, etc), and that such constraints might end up also being efficient for application processors, and possibly sufficient most of the time. But maybe I’m totally wrong.

For the motor control CPU, it’s actually one level of cache: 16K each for instructions and data. The 576K of TCM (tightly coupled memory) is not a cache; you would put your real time code in there. The 2MB shared memory is also not cache.

Good points indeed. Then I agree that TCM can help make a huge difference with more common architectures.