BeagleBone AI-64 is a single board computer (SBC) powered by a Texas Instruments TDA4VM dual-core Cortex-A72 + hexa-core Cortex-R5F processor which also embeds an 8 TOPS AI accelerator, plus three DSP, as well as plenty of I/Os that makes it ideal for advanced AI industrial applications.

It follows the BeagleBone-AI SBC launched in 2019, but with much higher specs including a 64-bit Arm processor, 4GB RAM, three USB 3.0 ports, an M.2 E-Key socket with PCIe, USB and SDIO, plus the usual expansion headers that keep compatibility with existing BeagleBone cape add-on boards. 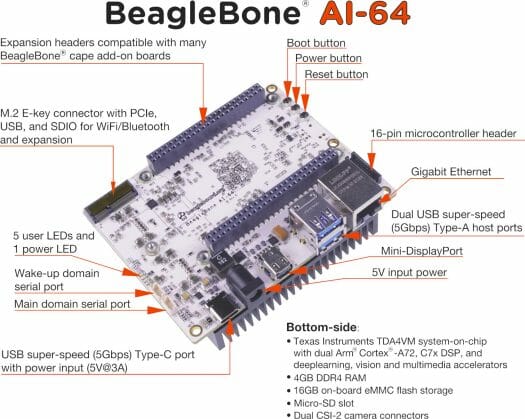 Another notable change is that a mini DisplayPort has now replaced the micro HDMI port found in earlier boards. The TDA4VM SoC comes with many co-processors, so it will be interesting to see how well those are supported in the software. BeagleBoard.org provides Debian 11.3 with XFCE desktop environment for the BeagleBone AI-64 bootable either from the internal flash or a microSD card, and the instructions to get started are the same as for earlier BeagleBone or BeagleBoard boards.

The BeagleBone AI-64 is open-source hardware with the hardware design files, documentation, and some software, available in a dedicated git repository. You may also find additional information on the product page. The board is available through three distributors namely Digi-Key, Element14 (Asia), and OKdo for about $187. 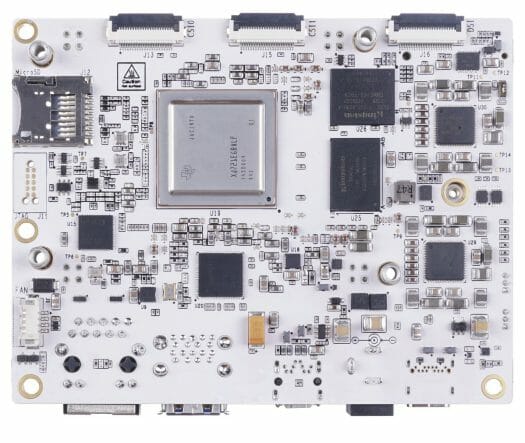 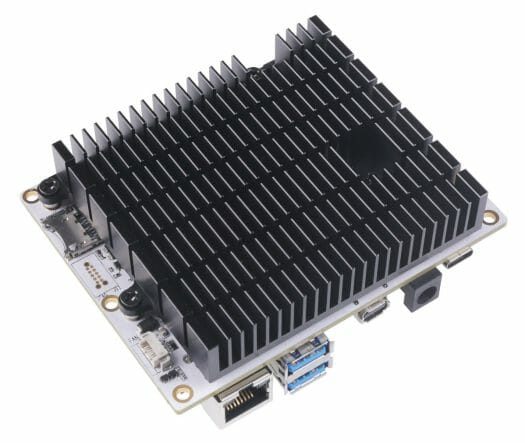 Let’s hope it follows the tradition of excellent design and build quality as its predecessors. At least at this price it doesn’t target hobbyists anymore, but RPi and others filled that gap since the original beaglebone.

Finally one that can run with open-source GPU drivers, the previous models all used SGX5xx. PCIe and a decent amount of RAM are great as well.

Are you sure 8XE is supported by open-source stack?

I think I was wrong here: at least the initial version was announced to support 6GX, AXE and BXS. I assumed it would also cover the other Rogue variants (series 7 and and 9), but apparently it’s not yet part of the source code.

Um I guess this will interest some users, but AI and video seems to be eating everything. How about bringing back the Pocket Beagle, a good old embedded linux board with some analog capability that is more industrially oriented than the raspberry pi? Those have gotten very expensive and hard to find. Most of the embedded applications I can think of for this new board are not very nice. I..e they involve things like face recognition.

It has the usual assortment of industrial features from TI like PRUs, encoders, ADCs, CAN etc.
What sort of thing do you have in mind that’s missing ?

6x R5F! It would be interesting if some of those may run in lock-step mode and if they may share whole RAM or are on their own island with some dedicated small SRAM.

To me it seems like lock-step mode is limited to certain SKUs.

That’s because AI and image processing are consuming everything, they’re both now industrial standards for automation including automated QC

How about part recognition or defect recognition in manufacturing for automated QC? AI assisted tool pathing? AI augmented safety where an ai can detect a foreign object within a robots work space and reroute the robot to bypass the obstacle or just stop the robot? You see nefarious use cases because you want to see them

God, the title is a nerds delight who names these things? Did they use all 26 letters of the alphabet and 0 through 9