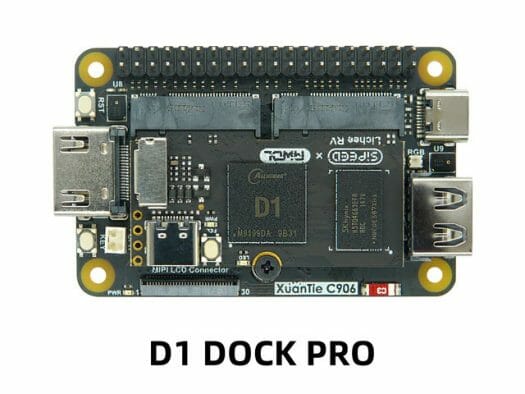 Sipeed has launched the Lichee RV Dock Pro kit for the company’s Lichee RV Allwinner D1 RISC-V module that builds on the earlier Lichee RV Dock carrier board and adds a MIPI/RGB LCD connector, two built-in microphones, as well as an on-board JTAG+UART debugger based on Bouffalo Lab BL702 microcontroller.

The MIPI interface used to be for the 6-mic array expansion, so it’s not available for that board which features two microphones instead. In the original RV Dock board, MIPI displays required an expansion board, but they can now be connected directly to the board.

The specifications are preliminary since Sipeed did not bother to update the documentation specifically for the Dock Pro, and the only information that I could find is a tweet and the photo from the Aliexpress listing where it is sold with the Allwinner D1 system-on-module for $29.50 including shipping. Since the core module is the same, software support remains the same with Tina Linux based on OpenWrt 14.07, as well as Debian and Alibaba/T-head YoC RTOS images.

It would be better if they released a dock with a LAN port and a double-height USB (so that there are 2 USB ports).

By the way, the first alpha versions of Armbian (Debian\Ubuntu) are already available for this model Lichee RV Dock and can build your own versions in this build system (details are available on the Armbian forum).

I tried the Armbian image, and it’s amazing and amazingly easy.

… and for what price then?