Espressif Systems have announced their one-stop Matter solution that features their ESP32, ESP32-C, and ESP32-S series wireless microcontrollers with WiFi and/or Bluetooth LE connectivity, as well as the ESP32-H series with an 802.15.4 radio for Thread and Zigbee connectivity.

Matter, which was first introduced in 2019 as Project CHIP, aims to improve interoperability among Smart Home products, has a focus on security, and the protocol is supposed to work on top of the most popular communication standards like Ethernet, Thread, 802.15.4, WiFI, Bluetooth, and so on, but more on that later. The first commercial products with support for Matter are scheduled for the end of the year, so all major vendors of wireless chips have already introduced Matter-ready solutions including NXP, Silicon Labs, Nordic Semi, and others. Espressif had actually already talked about Matter support with the announcement of the ESP32-C2 chip. 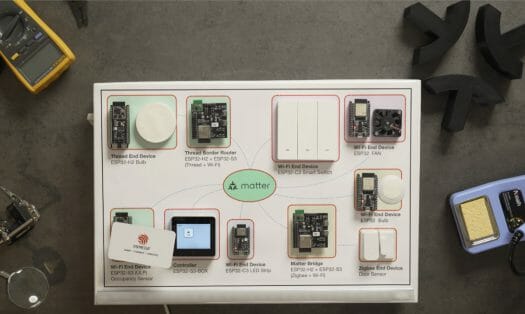 But the recent announcement targets all Espressif’s ESP32 chips for Matter protocol support. WiFi-capable chips will enable the design of Matter-compatible Wi-Fi devices, while ESP32-H2 will power Matter-compatible Thread devices. The chips can also be combined to create WiFi Matter bridges for Zigbee or Thread end devices, and the WiFi + BLE chips will be found in Matter-BLE Mesh bridges in order to connect Matter networks with Bluetooth LE Mesh devices. 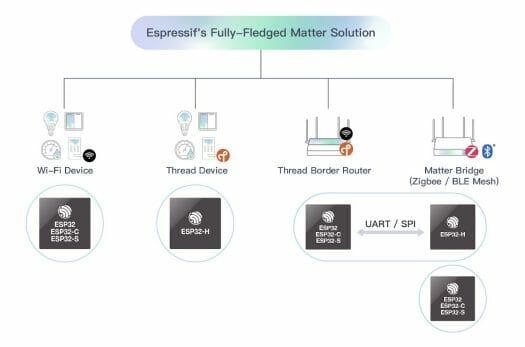 The company also released ESP-Matter SDK which works on top of the official Matter SDK and Espressif’s ESP-IDF framework. You’ll find the code on Github, as well as basic instructions showing you still need to use the Master branch (instead of a stable released) for both the Matter SSDK and the ESP-IDF framework. Espressif’s ESP RainMaker AIoT cloud platform for remote control and cloud-based device management also works with Matter devices. More detailed documentation explaining how to develop Matter devices and obtain certification (that part is currently empty) can be found on the Espressif website.

While in theory, Matter should mean all devices from different vendors should be able to work together whatever connectivity method is issued, I was told it may not be the case, at least initially, and that Matter is “really not going to change anything when it comes to smart home products”.

This was the information I was given by a reader who visited Silicon Labs’ booth at Computex 2022. Expanding further, I was told Matter would only support OpenThread and WiFi, with Ethernet potentially added at a later stage. Bluetooth would only be used for onboarding, and there doesn’t seem to be any plans to support Zigbee, Z-Wave, and other standards. And indeed, if we carefully read Espressif’s announcement again, ESP32-H2 is a chip with Bluetooth LE & 802.15.4 (Thread and Zigbee support), but only Thread will be directly supported, and Zigbee and BLE will only be supported by Matter indirectly through WiFi Matter bridges.

Are you sure? The sMattering of comments you’ve left suggests otherwise!

AFAIK matter is from the zigbee alliance (now renamed) and they just doing the same mistakes they did with zigbee (like still allowing vendors to only have a subset of function with matter while for all function the manufactures hub is necessary). Also at a early stage they claimed to open source everything while.. well, you can see for yourself – doesn’t matter!

Matter works today on Ethernet. That’s the thing about IP networks, you can’t tell if the link is over Wifi or Ethernet.

It also makes me wonder why espressif in the announcement explicitly only mentions Wifi if Matter is based on IP.
Is there anything that causes The Matter implementation on ESP not to work with ethernet? Do you have any experience in this field? I am talking specifically about ESP not other MCU etc

Matter includes bridge devices. Bridge devices can easily be made to bridge into Zwave and Zigbee or even Insteon. The nuance here is that the Matter group is not providing an SDK for Zigbee/Zwave it is up to the various vendors. You will likely see bridge devices on the market.

What’s the Matter with you?

will this be available on the arduino ide for esp ?

What’s the difference between Matter protocol and MQTT or CoAP?

MQTT and CoAP are generic transports. Matter defines actual devices and actions you can do to them.

OK, but can’t they define specific actions on top of CoAP/MQTT, which are open protocols?

Matter runs on TCP/IP. The Matter protocol is open. Matter is planned to support high bandwidth things like cameras at a later stage. That is too much for COAP/MQTT. The source code for the Matter stuff is here: https://github.com/project-chip/connectedhomeip

Internally Matter is just Zigbee warmed over with Homekit security. The Zigbee networking layer has been replaced with TCP/IP. Google for a Zigbee protocol document to get an idea of how the protocol works.

Matter supports bridges. You could certainly build a bridge from Matter into COAP/MQTT but it is not so simple. To make this work you would have to map specific devices running on COAP/MQTT back to the Matter devices.

MQTT is sort of like the TLV layer in Matter. But then there is a whole layer of device specific stuff piled on top of that. Matter works in terms of light bulbs and thermostats. Not generic low level messages like MQTT.