AAEON has unveiled the UP 4000 single board computer with a form factor and ports arrangement similar to Raspberry Pi 2/3, but powered by a choice of x86 processors, namely the Intel Atom E3900 series, Celeron N3350, or Pentium N4200 all parts of the Apollo Lake family.

The first UP Board was introduced in 2015 as a device offering an x86 alternative to the Raspberry Pi 2 with an Intel Atom x5-Z8300/Z8350 “Cherry Trail” processor, but later “UP bridge the gap” boards from the company used larger “Squared” (85.6 x 90 mm) or “Xtreme” (122 x 120 mm) form factors. The UP 4000 SBC brings us back to the original business card form factor but with a boost in performance and various specifications improvements. 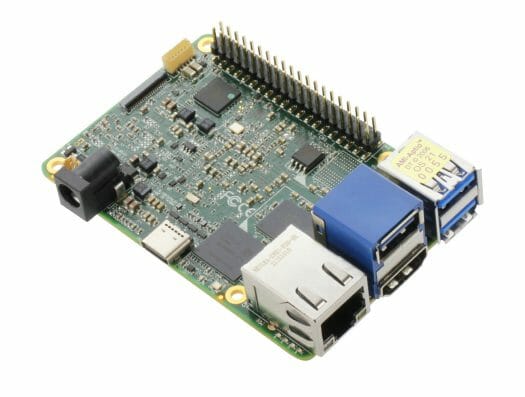 UP 4000 vs UP Board specifications 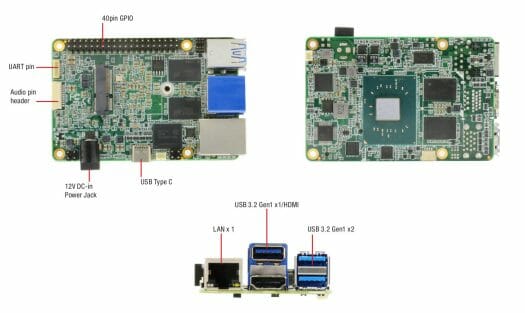 AAEON says the new board is able to deliver 30% faster CPU performance and twice the 3D graphics performance compared to UP Board. The UP 4000 did lose one USB port, but it might be for the best, as the company used a USB + HDMI combo connector, which puts Ethernet, HDMI, and USB Type-A ports on one side of the board.

The new interfaces include support for an additional display through a USB Type-C port with Displayport Alt. mode, TPM 2.0 security, and support for M.2 modules (WiFi, AI module, 5G connectivity) via an expansion board that’s coming later this year. The UP 4000 should also be compatible with expansion boards for the UP board. 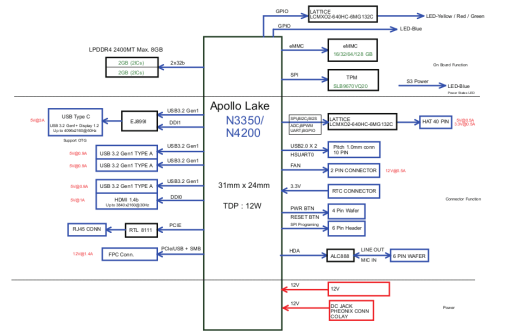 On the software side, the company lists Microsoft Windows 10 full version, Windows IoT Core, and Linux (Ubuntu, Yocto). But as an x86 board, you should be able to install other 64-bit x86 (AMD64) operating systems as well including FreeBSD or NetBSD, but Windows 11 may not be supported due to the processor used, or at least not directly without some hacks. The new Apollo Lake SBC is said to be especially suited for automation, robotics, and retail services.

The UP 4000 SBC is now up for pre-order with a 10% discount until July 15, and prices range between $116.10 and $233.10 depending on CPU, memory, and storage configuration. Shipping is scheduled to start in August. More details may be found on the product page.

How hard is it to do a web search for eg “n4200 ark intel” to get the specs? This is more ‘crippled I/O’ than ‘fake I/O’ since SATA and most of PCIe lanes not exposed 🙁

I have an UP Squared with Pentium N4200, 4GB RAM and 32GB eMMC and it’s been fabulous for running pfSense on for years now. I would much rather recommend getting an UP Squared than UP 4000, because it’s the same SoC, but you get a lot, lot more I/O.

UP 4000 kind of cripples that SoC with such an anemic selection of I/O, which is quite sad.

Fully agree. But most probably this board should serve as a drop-in replacement for the original UP Board since following the stupid RPi form factor makes otherwise not that much sense since RPi enclosures don’t fit due to different placement of some components.

Talking about 12V vs. 5V on the original UP Board: that’s how I killed mine just recently…

I don’t remember having had the schematic with mine, but I wouldn’t be surprised if there was a small fuse at the input. I can’t see any on mine due to the heat sinks, but that’s worth checking.

My original UP Board was almost all the times in the drawer since due to the moronic Micro USB3 Type B Connector for the USB3 OTG port I never got any SuperSpeed USB connection since there seem to exist two pin-outs for these cables and IIRC those are ‘illegal’ according to USB implementors forum anyway.

SBCs should move to Pico-ITX, and forget the RasPi form factor. ~49% larger.

There are loads of other non RPI boards out there already. Like Kontrons recent 3.5″-SBC-EKL series.

Just costs that separates them.

If not wanting RPI format Ameridroid still has the Atomic Pi for $45.
Don’t forget the extra bits you might need.

You has never have a RPi4. It is faster than Intel Atom x5-Z8350 by a large margin even when running without any fan and consuming a fraction of the energy.

I still have my original UP! board. It still runs, but like the original, running any kind of modern OS will make that heat sink get really hot. Tried some 3rd party hats from the Pi world, most didn’t work. A kind of a oddity now. RockPi X is $49 for entry level Cherry Trail now.

Most likely depends on what you do with it. Among the two I have, one is on my desk, powered 24×7 serving various tests (all performance-related), and I unplugged the fan since it was not needed. The heat dissipates via the bottom plate into the desk and that’s sufficient. Right now in idle it’s probably at 39-40°C. Under load it gets hotter, but nothing that causes throttling so that’s fine this way. Regarding the other board, it’s in my computer bag, in an acrylic enclosure I made ( ) and its bottom plate is in contact with the bottom acrylic… Read more »

Just waiting for such a board with a better network controller, i21x or even i225 for hw PTP and other nice features. Even Realtek is starting to provide such functions, albeit in other controllers.

Do you know where I Can found examples for control GPIO from Linux for this Board UP4000 ?
Git or repository Best regard

I’ve listed the GPIOs in the Ubuntu review and linked to the documentation with examples using sysfs.