Raspberry Pi RP2040 microcontroller has been available for one dollar in single quantities for about half a year, with at the time, 500- and 3400-pieces reel pricing to be determined.

But Raspberry Pi Trading has now started to sell the chip in bulk with reels of 3,400 and 500 pieces directly to businesses for a unit price of respectively 70 and 80 cents via the new Raspberry Pi Direct website. Distributors have been selling reels for a while, but closer to 85 cents to 95 cents per unit. 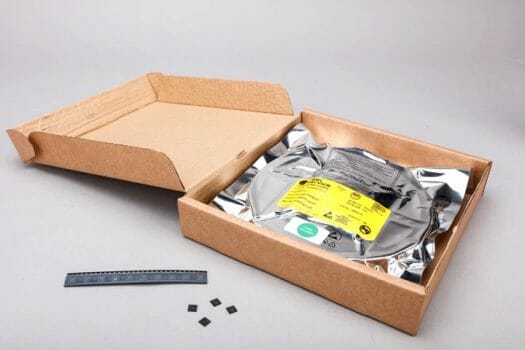 That basically means smaller quantities should still be purchased through distributors, but it makes more sense to purchase reels directly from Raspberry Pi Trading. Eben Upton also says they have enough wafer stock to produce 20 million chips with more on the way, so no shortage is expected. That contrasts with the current situation with many STM32 microcontrollers when some companies have orders for batches to be manufactured as far as 2027. 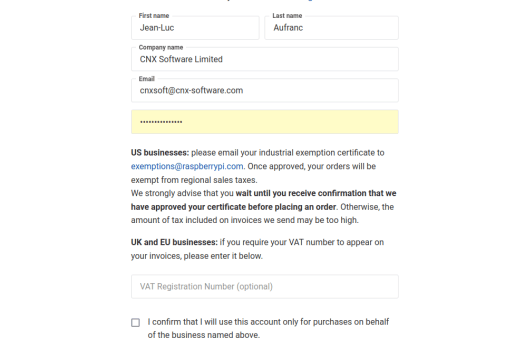 Note that Raspberry Pi Direct is only selling to businesses, so in case you wanted to get a reel with 500 pieces purchased under your name this won’t work. A company name is required during registration, and they only accept bank transfers from the company account. US, UK, and EU companies will require extra information.  My account was immediately approved, and I could add a 500-piece reel for $400. 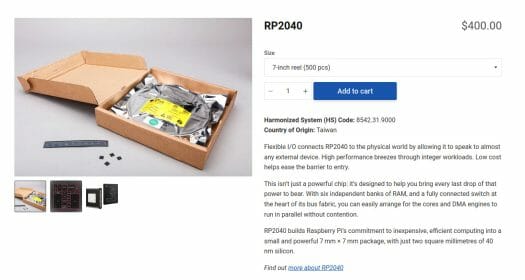 In the next screen (not shown) with address and phone number, $80 in taxes was added for a total of $480, which was odd since I selected Hong Kong. But taxes were gone in the next screen after clicking on Shipping, with instead $75 added for shipping by DHL.

Clicking on Continue to payment will reveal more information on the same page with the option to select a different billing address. 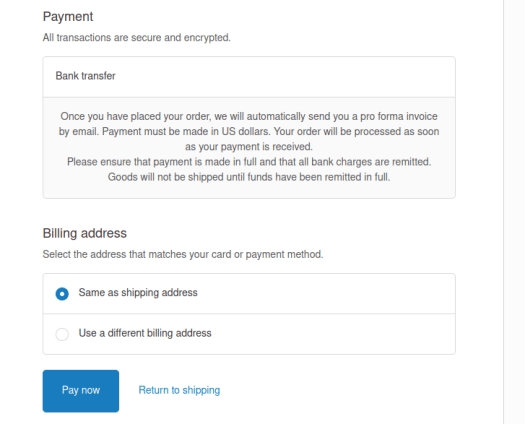 For people who are not familiar with microcontroller pricing, Raspberry Pi RP2040 pricing is amazing in 2022, but that’s roughly the price one might expect from a similar chip, and there are certainly cheaper microcontrollers, albeit less capable and convenient to use, such as the PMS150C that starts at just 3 cents.

Did you mean to include your address in that screenshot? Not sure if you might want to edit that?

Worth checking just in case 🙂 I’ve almost uploaded photos with shipping labels in the background in the past.

Your home address isn’t well known? Hmm, I guess I’ll keep it to myself, then. 🙂

Ha ha ha.. yes. I forgot that anybody who received a parcel from me got one of my home addresses. I guess it must be around 100 people…

Well, I would hope that those of us that involved with the site will use discretion and not be horrible people. 🙂 After all, you know my address and I trust you with that knowledge. Guess I should behave myself here. 🙂

Hi Jean-Luc, sorry that I’m going to ask such a question. But what can one do with Raspberry pi? I was always curious about why so many people talking about it. Does it have anything to do with computer or home lighting system automation?

It looks like you are asking about Raspberry Pi boards, instead of RP2040 microcontroller. If so, check out this article: https://www.cnx-software.com/2020/03/24/know-the-differences-between-raspberry-pi-arduino-and-esp8266-esp32/

I think that should be 80 and 70, otherwise sounds like the larger one is more expensive per piece.

RP2040 pricing is comparable to ESP32-S2 or ESP32-C3, which have wireless communications in addition to comparable CPU and ram (400KB ram instead of 262KB even). All are good value I guess, depending on what you want to do, but RP2040 doesn’t disrupt in that way.