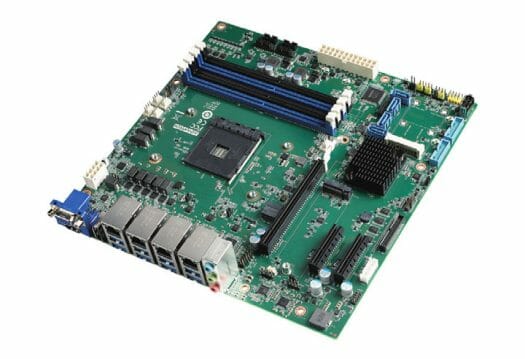 The AMD Ryzen “X” CPUs do not come with graphics, while the Ryzen “G” APUs integrate a Radeon GPU. It’s unclear whether the Ryzen Embedded 5000 “E” processors are equipped with graphics or not. Considering the lower number of cores for equivalent TDP compared to the “X” models, I’d assume Ryzen Embedded 5000 processors are either designed to operate in a wider temperature range (but the motherboard specs don’t seem to indicate that), or they integrated Radeon graphics. It’s hard to find additional information since the new Embedded processors are not shown on AMD websites at the time of writing.

Advantech says the AIMB-522 is able to support more than 10 high-quality video cameras through its USB 3.2 and Ethernet ports, and the onboard PCI-Express x4 slots can enable additional camera devices or industrial controllers. Advantech AIMB-522 industrial motherboard is available now at an undisclosed price. More details may be found on the product page and press release.

Your link is to a desktop part, not the Embedded processors.

So the embedded versions will then have the cpu solderd an the other will have the sockets as shown in the picture?

I don’t think the E chips will have embedded grahpics. The cache sizes suggest they are a ‘desktop’ Vermeer chip. These have 32Mb L3cache per CCD chiplet (i.e. per 8 cores) https://en.wikipedia.org/wiki/List_of_AMD_Ryzen_processors#Zen_3_based_(4th_generation)
Whereas the Cezanne mobile APU based G chips have 16Gb L3
https://en.wikipedia.org/wiki/List_of_AMD_Ryzen_processors#Cezanne_(5000_series_APUs)

The definition of “embedded” is broad. It could mean almost anything.

A CPU drawing 142 Watts (default socket limit), a tiny GPU or no GPU, and other components could still add up to less maximum power draw than many consumer desktops. You could even add one of those gigantic passive heatsinks onto it, like the Noctua NH-P1.

That would be the first 10-core AMD has ever made, as far as I know. 2 chiplets with 5 cores enabled on each, 32 MB of L3 cache on each chiplet for 64 MB total. This was discussed briefly in September 2020, and something made possible by the 8-core unified CCX. Odd core counts per CCX are known to be possible because AMD already makes high-frequency, high-cache 8-core Epyc 72F3 CPUs with only 1 core enabled per chiplet. High price tag too. https://twitter.com/1usmus/status/1302989616463708162 https://www.techradar.com/news/amd-ryzen-4000-could-have-a-10-core-cpu-aiming-to-destroy-intels-comet-lake-flagship https://www.anandtech.com/show/16778/amd-epyc-milan-review-part-2 With chiplet yields being high, there’s no reason AMD couldn’t make some 14-core CPUs as… Read more »

I like it for industrial use, when I have to use a compact yet powerful computer: 4 Ethernet ports, plus 2 x4 slots (good for i350 NICs). Probably too expensive if there’s space for a bigger PC (e.g. 4U rack mount).