Some ultra-compact 4G LTE wireless routers housed in what looks like a largish USB dongle are based on Qualcomm Snapdragon 401 (MSM8916) quad-core Cortex-A53 processor and have been hacked to run Debian 11 with Linux 5.15 instead of the pre-loaded Android OS.

Soon after Extrowerk had purchased a ~$20 “4G LTE WiFi modem” USB dongle, he noticed it would show as “Android” when connected to his PC. It also turned out that Chinese hacker HandsomeYingYan had already done some work on the device modding the lk2nd bootloader and the Linux kernel for the OpenStick project for “mainline Linux on msm8916-based 4G USB modem”, and documented his work (in Chinese) to run Debian 11 on the “4G USB WiFi Modem” pictured below. 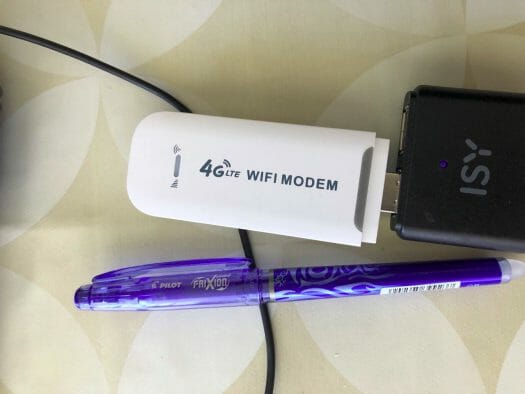 Let’s go through some of the specifications of the said wireless router:

The Snapdragon 410 is found as MSM8916 in mobile phones with a 4G LTE modem, but there’s also the APQ8016E that lacks the modem but was integrated into the 96boards compliant Dragonboard 410c SBC that Linaro used to work on mainline Linux support and more. Many years later, that means the Snapdragon 410 is well supported, and that certainly help with this little hack.

The process to install Debian 11 on the “modem” is not overly complicated either as explained by Extrowerk using a Ubuntu machine:

Extrowerk goes on to say the RNDIS and ADBD are started by default, and it is possible to connect to SSH through ADB using IP address 192.168.68.1. He/she also explains how to set up WiFi, and install packages with apt from there. GCC can even run on the little device.

That’s all good, but just as you can’t judge a book by its cover, you can’t judge a “4G LTE WiFi modem” by its cover either, as I happen to own a “4G LTE WiFi modem” hotspot that looks exactly the same, but does not show up as “Android”, and should be based on the Qualcomm MDM9200 platform instead. I can’t find any such device with an MSM8916 processor on the usual Aliexpress and Banggood websites, but there’s one on Alibaba for about $15. [Update: link removed as this model does not work (see comments section), but users on Hackaday were successful with some listings on Aliexpress).

This is quality reporting, thanks. Does the 4G functionality actually work in Debian?

4G data and SMS work according to the table in the Chinese documentation.

but there’s one on Alibaba for about $15.

minimal order qty of 2 and around 25$ shipping to my country,
I agree with previous comment, better getting something like quectel

postmarketOS on Snapdragon 410 might be an option if you’d prefer an Alpine userland.

There’s quite a few on Aliexpress for ~$11 ish, but only Chinese region bands – unknown if the other models ($20+) have the same chipset.

Additionally the USB port is actually capable of host mode as the original author posted about in a followup in which he connects a usb mouse.

Even taking into account the limited ports, for the price these are still mighty impressive.

and re Quectel / Simcom modules – they’re a slower older arch, is more expensive and is still just a module.

that says 9600 chipset for both black and white.

actually it’s way more cheap in China,I got 3 of this and just cost 19RMB($3) for each，free shipping。

I may be wrong on that one, but I think it’s because Qualcomm does not get its royalty fees in China, so anything cellular is much cheaper.