Once upon a time (i.e. a few years ago), it would have taken weeks, and more likely months, to port the latest version of Android (AOSP) to a specific single board computer. But thanks to initiatives such as Project Treble, Android reference boards such as DragonBoard 845c (RB3), HiKey 960, Khadas VIM3, and Qualcomm Robotics Board RB5 can now get the latest version of Android up and running in a matter of days. 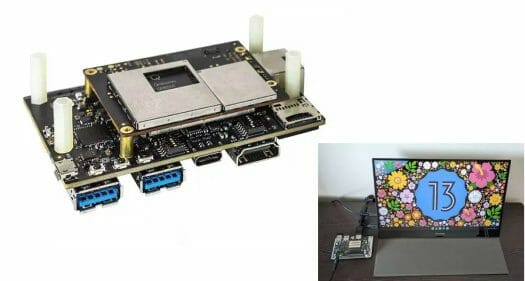 Android 13 was released on August 15, and Linaro wrote about RB3 and RB5 support on August 18, and while Linaro engineers collaborated with Google engineers before the AOSP, it is still an impressive feat.

Amit Pundir, Linaro Engineer, explains how this was made possible:

Over the years Linaro has worked together with Google to constantly keep 96Boards development boards working and in-sync with the upstream Kernel versions and AOSP. Hardware with good software support is essential for testing and validation of the latest AOSP and latest stable and upstream kernels. The collaboration with Google and the upstream community, combined with the upstreaming efforts of Linaro’s Android team and Linaro’s landing team for Qualcomm have brought us to where we are today. And while there is always more work to do, being able to boot the latest Android release on a development board straight out of the box is a great satisfaction!

Two images are available, one based on the android13.0.0_r3 tag used by the Pixel 6a and the other using AOSP master. Those are unified images, meaning they can run on either RB3 or RB5 without modifications. There are still a few issues here and there, notably WiFi and Bluetooth regressions which are being worked on.

I’ve also asked Khadas whether VIM3/3L boards would get Android 13 support since there are listed as official Android reference boards, and I was told that while the boards are supported by the official Android AOSP mainline, not all features are supported. Amlogic does not plan to provide an Android 13 SDK for the A311D processor, so it may explain why. Khadas also informed me their software engineers focused their efforts on Ubuntu and their OOWOW system, which should make sense since most SBC users are probably using Linux.

Back to Android 13 support on the RB3 and RB5 platforms… You can find more details and follow the development progress on the Software Device Enablement for Android Upstream page, and/or attend the virtual Linaro and Qualcomm Tech Day on September 6 to learn more about Linaro’s Android team efforts to support the reference boards in AOSP.