Blues Wireless Sparrow is a LoRaWAN solution designed to connect a group of low-cost, low-power device sensors for shared data backhaul to the cloud. It is comprised of STMicro STM32WLE5 LoRa-based sensors whose data is then routed through the company’s Notecard-powered WiFi or cellular gateway and ultimately a cloud app hosted on AWS, Microsoft Azure, or other IoT cloud platforms.

The company claims the Notecard and Sparrow solutions ease the development of IoT networks in a way that was previously only available “to sophisticated engineering firms”, and now Blues Wireless supports cellular, WiFi, and LPWAN technologies. 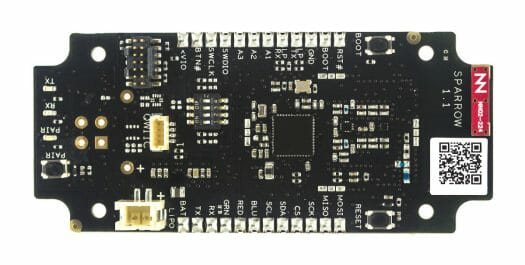 Let’s have a look at the “Sparrow Essentials” board specifications first:

The Sparrow Essentials board can also be used in conjunction with a Notecard gateway, or within an enclosure (the Sparrow Reference Sensor Node) with a Bosch BME280 temperature, humidity, and pressure) sensor,  a PIR motion sensor, and a battery holder for two AAA batteries.

The solution allows you to create a last-mile sensor cluster with a few Sparrow Essentials board or Reference Sensor Nodes that connects to a cellular Notecard gateway forwarding the JSON formatted data to the company’s Notehub cloud-based service and ultimately to your customer cloud app hosted on whatever cloud IoT platform. 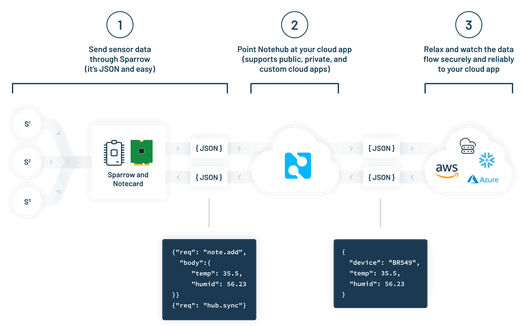 You’ll find more details on the developer’s website and the product page. In order to quickly get started and evaluate the solution, there’s also a Sparrow development kit that includes a Wi-Fi Notecard, a Notecarrier A with antennas and Qwiic connectors, two Sparrow Reference Sensor nodes with AAA batteries, three Sparrow Essentials boards (one for the Gateway and two for adding your own sensors) with CR2032 batteries, an STLINK-V3MINI probe for sensor programming, a USB cable, and a Qwiic connector for turning the Notecard and Notecarrier into a LoRaWAN gateway. 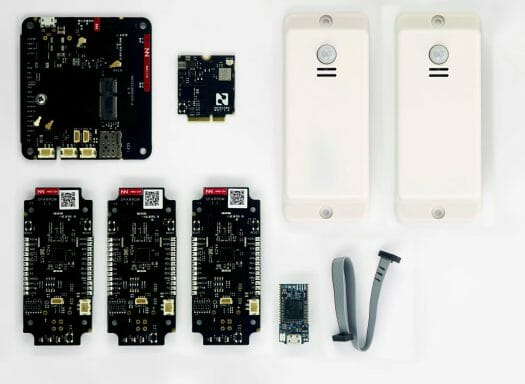 Besides the hardware, the development kit also comes with example firmware and a web application. You’ll find everything to get started in the documentation. The Sparrow development kit can be purchased for $199 on the Blues Wireless store.