Arducam has launched of Time-of-Flight (ToF) camera module for Raspberry Pi that enables depth sensing by capturing 3D data (at 240×180 resolution) at a distance of up to 4 meters.

Arducam has launched several cameras for Raspberry Pi boards over the years, more recently the Arducam Pi HawkEye 64MP camera, but the Arducam ToF camera is quite different, as while it still connects to the MIPI CSI connector of the SBC, it is used to measure distances and depth and display 3D data. 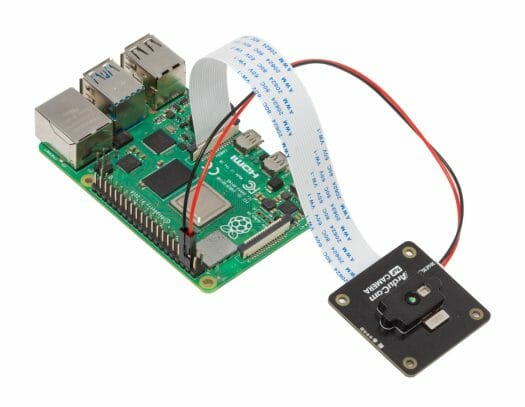 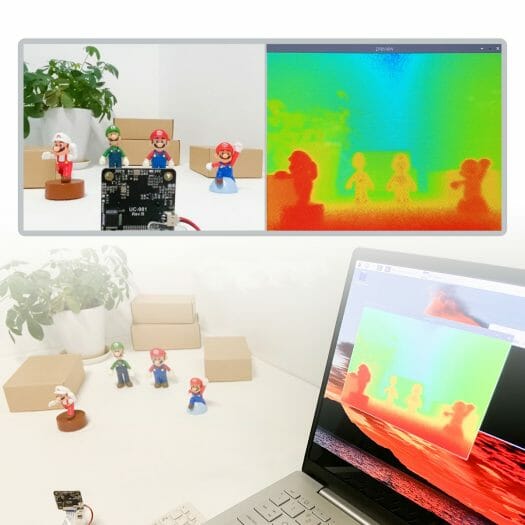 The solution allows you to capture and display a representation of 3D data in a way similar to thermal cameras, except in this case, for depth sensing instead of temperatures. Arducam provides a TOF SDK with C, C++, and Python sample code available on Github, while the SDK documentation can be found on the Arducam website.

I’m not sure which sensor they use, as some of the specifications are similar to the ones for STMicro ToF sensors, the 240×180 “number of effective pixels” should not be possible. So it’s more likely a ToF sensor from JointMicro, a variation of their JM152A iToF sensor [Update: I was told the solution is based on a Sony ToF sensor]. The resolution is not high enough for use as a 3D scanner, but it can be integrated into various robotics projects. Watch the video below for a few demos.

Arducam has launched its ToF camera on Kickstarter with a $3,000 funding goal that has been surpassed within a few hours. Rewards start at $30 for the camera, flat cable, and a 2-pin power cable that needs to be connected to the 5V and GND pin on the Raspberry Pi GPIO header. There are also two range expansion kits with a $44 kit with a CSI to HDMI and HDMI to CSI adapters and a $80 LAN kit to expand the range even further through an Ethernet (Cat 5) cable. Shipping adds $6 to $7 and is only available to North America, some European countries, Australia, as well as Malaysia, Taiwan, Hong Kong, and Singapore in Asia. Backers should expect to get their perks shipped by November 2022.

(Very) impressive pricing when compared to other ToF cameras!

The choice of MIPI CSI is at the same time a very good idea because it just acts like any camera so you can reuse lots of software out of the box, but has the drawback that you won’t be able to use it with cheaper boards (e.g. ESP32-based, nRF-based, etc.), for which I2C or SPI would be better. Wonder what is the cheapest board with MIPI CSI out there…

The Raspberry Pi Zero must be the cheapest one, or close to it, provided it’s available.

Yep, I realised just after posting that the Zeroes have CSI support. That becomes an interesting proposition in terms of price and size for some applications… If only any one of them was available.

I imagine most meaningful uses of ToF cameras will require beefier processing power and better software support than those you listed. So its not a big problem

Arducam told me it’s “Sony-based” followed by “that’s all we are allowed to say”, so it might be a yet-to-be-announced Sony ToF sensor too.

I am still waiting for the Sipeed ToF sensor (first announced last November), so this seems a nice alternative, since it is also based on a Sony sensor. It ‘s really nice to see multiple offerings at a reasonable price, since most ToF offerings are really expensive for the average Joe