Odyssey Blue mini PC based on the ODYSSEY-X86J4125 SBC is now offered as part of a bundle with Frigate open-source NVR platform with support for real-time local object detection, and an Coral USB AI accelerator.

The Odyssey Blue mini PC is equipped with an Intel Celeron J4125 quad-core Gemini Lake Refresh processor, 8GB RAM, and a 128GB SSD preloaded with an unnamed Linux OS (probably Debian 11) and Frigate Docker container. The solution can run over object detection at 100+ FPS when equipped with a Coral USB accelerator. 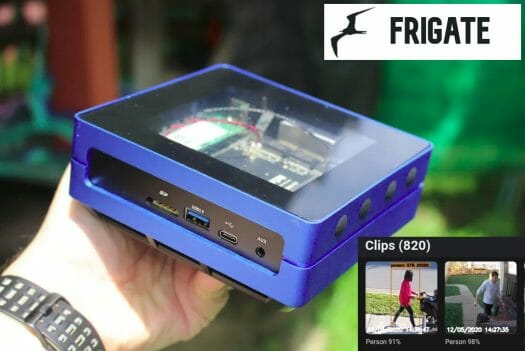 Since the hardware is not exactly new, and we’ve covered it in detail in the past, even reviewing the earlier generation SBC with Celeron J4105 processor and Re_Computer enclosure, I’ll focus on the software, namely Frigate NVR in this post.

Frigate is an open-source NVR program designed for Home Assistant with AI-powered object detection that runs as a Docker container and uses OpenCV and Tensorflow to perform real-time object detection locally for IP cameras. Some of the highlights include:

While Frigate can run object detection on the processor, using Google Coral accelerator improves performance a lot and enables over 100 frames per second detection. The documentation goes through recommended hardware, installation instructions, configuration, Home Assistant integration, and more. Dahua/Loryta, Hikvision, and Amcrest IP cameras are recommended in that order, but people using Reolink have often encountered problems, and PoE cameras should be preferred over WiFi cameras.

Odyssey Blue (J4125) is actually part of the recommended servers and the only one from the list that also supports M.2 Coral AI accelerator, so that’s a bit odd the kit ships with a USB accelerator instead. Other recommended/tested systems include Minisforum GK41, Beelink GK55, Atomic Pi, and Raspberry Pi 4, although the latter two are only suitable for a small number of cameras.

Seeed Studio sells the Frigate NRV bundle kit with Odyssey Blue and the Coral USB AI accelerator is sold for $328.99 including shipping. It should be mostly interesting for people wanting a Frigate NVR working out of the box, as mentioned above it should not be too difficult to roll your own with basically any recent mini PC plus a Google Coral AI accelerator. The latter may not be that easy to source however, since Seeed Studio told CNX Software that “considering the very limited supply of Coral USB Accelerator at this stage, only the Frigate NVR bundle kit is available online now”, and they only plan to resume selling the Coral USB Accelerator separately when the supply shortage is resolved.

Strange why they would use the USB instead of using one of the other options for Coral… Like the Mini PCIe or M2 versions. Just need to have a mobo that has that option and they are faster than the USB…

It is most likely due to supply chain issue. The USB Coral is the only thing that’s in stock right now.