The first stable release of Arduino IDE 2.0 is now out. Based on the Eclipse Theia framework, the new IDE provides a more modern and user-friendly user interface, faster compilation time, and more features we’ll discuss in this post.

Arduino initially introduced the Arduino IDE 2.0 beta in March 2021 with a live debugger with breakpoints support, a revamped user interface with features such as autocompletion of variables and functions. After 18 months of debugging with the help of members of the community such as Paul Stoffregen (the maker of the Teensy boards), the Arduino IDE 2.0 is not an experimental software anymore, and it’s the first version you’d see in the download page. 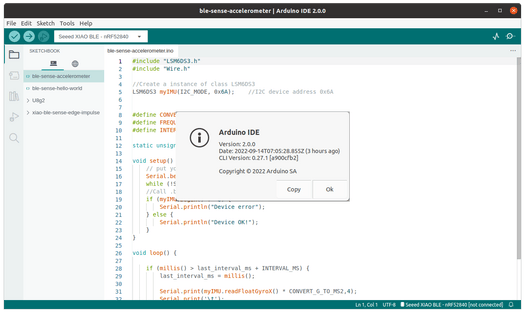 The Arduino IDE 2.0 is available for Windows 10 64-bit and newer, Linux X86-64, and macOS 10.14 “Mojave” or newer. If you’ve already installed Arduino 1.x, it will inform you of updates for your installed libraries and boards, and you can easily have access to your existing Sketches after installation.

Let’s go through some of the new features.

There are some obvious changes in the user interface with quick access to your Sketchbook, boards, libraries, and live debugger on the left side, and auto-completion as shown above should speed up your code writing once you are used to it.

We are also told code compilation should be faster. The first build takes a little while on the new version as well, but subsequent builds are much faster with an Arduino sketch for the Seeed XIAO BLE board taking 38 seconds to rebuild on Arduino 1.8.19 against just 5 seconds on Arduino 2.0.0. 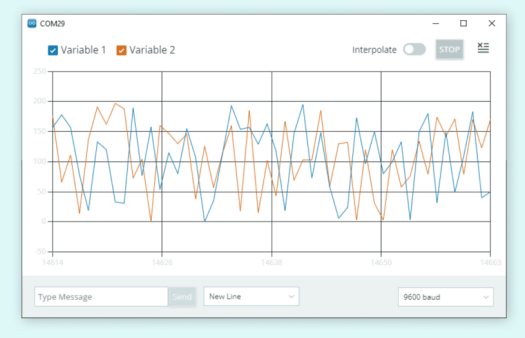 One potentially useful feature that I did not notice during the beta, or that was not implemented yet, is the serial plotter that can display data outputted to the serial terminal. The Arduino IDE 2.0 also supported dark mode, you can save your Sketches to the Arduino Cloud through the Remote Sketchbook integration making working on multiple computers easier, and last, but not least, the IDE can now update itself when a new version is available, and there’s no need to download the new version manually from the Arduino website.

The release of the Arduino IDE 2.0 does not necessarily mean you can uninstall the Arduino IDE 1.8, as while official Arduino boards should be well supported, third-party boards may still be experimental/in beta in the new IDE, as is the case for Teensy for IDE 2.0 for instance. But going forward, documentation should probably be written for the new IDE, unless it’s not working perfectly just yet.

Paul Stoffregen is amazing. I need to go try out the new IDE, I guess. I must assume (and hope) that a large effort was put into not breaking existing projects.

<Rant>
A bad start.
“Ignoring sketch with bad name”
Immediately after I started the IDE.
Bad? Because of a dot in the name? Really? Are these your improvements?
About 50 sketches to rename. Working on a bash script right now 😀
Or perhaps it is time to leave laziness and always use the ESP-IDF or at least PlatformIO.

This isn’t what the “WE DO NOT BREAK USERSPACE!” is about.

Hi thanks for the feedback. We did some tests and the IDE doesn’t complain if there is a dot in the filename. can you give us an example of a filename that creates the problem? The Arduino IDE tries to be as compatible as possible with the original IDE. We are trying to make it as simple as possible to migrate.

A shame portable mode is not built into Arduino IDE 2.0

I didn’t try yet, I just HOPE that an unchanged code upon hitting Upload button does NOT verify the code again! That was the dumbest and most annoying thing ever… Please tell me they fixed it

Nope – in fact they argue repeatedly in forums that it is a feature to “save machine code from littering the machine” and other such nonsense.

Don’t worry though, the new IDE is *so slow* that you won’t spend most of your time frustrated about building, you’ll spend it frustrated at everything else.

HI thanks for the feedback. what do you mean with “so slow” we are getting good performance on most machines.
On the topic of verify/upload when you upload the arduino-cli (embedded in the IDE) will cache most of the pre-compiled files. it will recompile just the main.

Eh. I moved on to Platform.IO years ago and haven’t looked back.
All of the rich features of VSCode, support for nearly every board, easy install of libraries, more control of your source and build, it’s just better IMO.
I suppose Arduino IDE is still a good starting point for newcomers and I appreciate the work they’ve put in though!

Sorry to say but I find the VSCode default automated checks and notifications to be the most intrusive and annoying thing ever. It really disrupts my development experience and using PlatformIO on VSCode is no different. It’s dreadful. How anyone thinks this is constructive is beyond me. On the otherhand TheThia development experience gets it right and with Arduino 2.0 you have access to the cloud for portability.

Pitty they didn’t just interate it in VSCode like PlatformIO does.

At the end of the announcement it reads:

So it’s not integrated into VS code but uses the same architecture.

It all sounds a bit underwhelming. Maybe it should have been v1.9

It’s a complete redesign using the Eclipse framework. That’s why there’s a bump in the major version number, and it took a while to release.

It’s a massive change from the old IDE.. there are a ton of features that don’t exist in previous versions like debugging, autocomplete etc