Makerfabs has launched a 3.5-inch TFT touchscreen display with built-in WiFi and Bluetooth connectivity through an ESP32-S3 dual-core Tensilica LX7 microcontroller clocked at 240 MHz with vector instructions for AI acceleration.

This display offers a 320×480 resolution through the ILI9488 LCD driver, uses a 16-bit parallel interface for communication with ESP32-S3 clocked at up to 20 Mhz making it suitable for smooth graphics user interface, and the company also claims it is smooth enough for video displays, but more on that later. 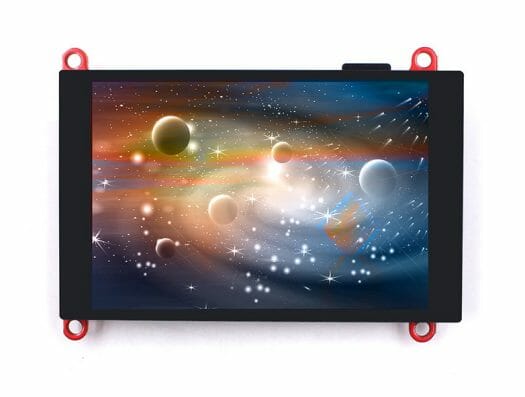 The display can be programmed with the Arduino IDE. Sample code using the LovyanGFX library and EAGLE schematics and PCB layout can be found on Github. Makerfabs also designed an ESP32-S2 model that lacks Bluetooth connectivity, and the ESP32-S3 touchscreen display comes with more RAM and eMMC flash.

I was tipped about this display by Jon, a regular reader and commenter on CNX Software, who bought it, and said it works as advertised. The ESP32-S3 can really drive a high-speed display with a parallel LCD interface. However, it can’t stream video because there is no H.264 decoder, but it is great if you want a responsive GUI.

Makerfabs ESP32-S3 16-bit parallel capacitive touchscreen display is sold for $39.80 plus shipping, and the ESP32-S2 model is the same price with a resistive display, and there’s a capacitive display option for $4 more. As a side note, we previously wrote about another, smaller ESP32-S3 display, namely the LilyGO T-Display-S3, with a 1.9-inch display connected over a slower 8-bit parallel interface, and no touchscreen function that sells for around $17.

The two pin connector is miniJST. The other two are like Seeed Grove (Mabee == Grove). What is the name of that connector? miniJST doesn’t fit. So this board only has 5 GPIO easily accessible. You could get a bunch more in the SD Card socket since I don’t need it.

If you’ve been using an SPI display with an ESP chip and getting annoyed watching it draw, this parallel LCD is about 50x faster. It is possible to hack a parallel LCD onto the ESP32, but the ESP32-S3 has an official, real LCD controller. You will also discover that parallel LCDs are in general cheaper than SPI ones because they are made in greater volume. 7in parallel touch LCDs are pretty cheap since they are used in millions of tablets. Your LCD does need to support 8080 mode, the ESP32-S3 does not support 24b RGB mode. Most parallel LCDs support… Read more »

What is the highest resolution the ESP32-S3 could handle with not very dynamic user interfaces?
what realistically largest LCD could then be connected?

The physical size of the LCD does not matter, all that matters is the resolution.

Yes a $10 MCU could be a solution and I even tried to look for such a solution but I had trouble finding one that offered me secure boot and flash encryption features and it would be well documented and preferably with examples available.
I mean the equivalent of
https://docs.espressif.com/projects/esp-idf/en/latest/esp32/security/flash-encryption.html
https://docs.espressif.com/projects/esp-idf/en/latest/esp32/security/secure-boot-v2.html
in ESP32.

All of the ARM CPUs support secure boot. Once you are booted you’d use Linux to encrypt the flash partitions.

Can you explain why the S2 version offers higher fps? Its the same LX7 core but S3 has two of them?

I think I misunderstood Makerfabs. The ESP32-S2 and ESP32-S3 probably have about the same refresh rate. It’s the comparison to another, older display where the ESP32-S2 is faster.

I would stick with the S3 versions. The S2 is extremely tight on RAM.

At least develop everything on the S3 first, then when you are done see if you can make it fit in an S2.

Sweet!
A microphone would be a nice feature.

you can probably attach a PDM one via the Mabee connectors. You’d need to check the schematic and manual to see if you can enable it on the right pins.

Nice one!!! Do you have a schematics for this board…would love to see the connections.