GL.inet Brume 2 is an OpenWrt router, or rather a “security gateway” as the company calls it, powered by a MediaTek MT7981B (Filogic 820) dual-core Cortex-A53 processor, and equipped with a 2.5GbE WAN port and a Gigabit Ethernet LAN port.

The device also comes with a USB 3.0 port for storage and a USB Type-C port for power. It is offered with either a plastic enclosure (GL-MT2500 model) or an aluminum allow case (GL-MT2500A model), and with WireGuard and OpenVPN, is suitable to host a VPN server and “monitor, manage, and configure SD-WAN settings”. 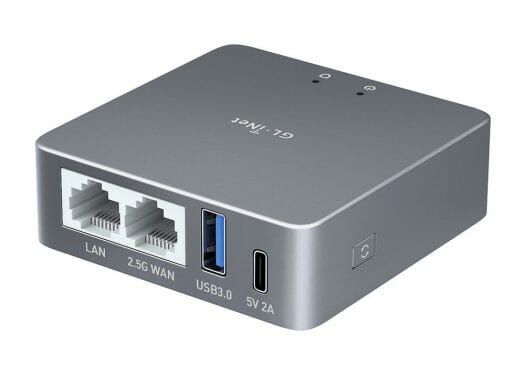 The Brume 2 runs OpenWrt 21.02 operating system with support for OpenVPN (tested up to 150 Mbps) and WireGuard (tested up to 355 Mbps), AdGuard Home, Tor Anonymity, and SD-WAN features.

Some specific use cases and highlights include:

Documentation to get started on the Brume 2 and other GL.iNet routers can be found on the documentation website. GL.iNet also has a GitHub account, but there aren’t any references to the “Brume 2” or “MT7981B” at the time of writing. Having said that, there’s already some source code for the MediaTek MT7981A/B (Filogic 820) processor as GainStrong has an OpwnWrt repository for their upcoming Oolite-MT7981 system-on-module and router based on the processor.

GL.iNet has just started taking pre-orders for the Brume 2 security gateway starting at $49 for the GL-MT2500 and $59 for the GL-MT2500A. Note those are quantity and time-limited offers, after which the prices will be $69 and $89 respectively. Deliveries are scheduled to start in December 2022, and I will probably get one for review. You’ll find more details and the purchase links on the product page.

I just came on to see that as also perplexed?
Often that ports are not symmetrical confuses me but this one even seems back to front.

That stuck out at me as well. Last I checked, most people have faster LAN than WAN, so it’d make sense to set it up the other way around.

Not that it’s a problem, per se, since OpenWrt allows you to reassign the networks in seconds, but still it’s a weird decision.

unfortunately it’s not the only project with such choices – see radxa e23 (featured here on cnx) and also friendlyelec’s R5S (although there is a single 1g and 2x 2.5gbps ports)

same surprise. I first thought “ah that’s to cover with the wifi, what’s the bitrate ? ah there’s none”.

Moving traffic between vlans on the lan side.

Surprised it has no wifi interface. This would make a nice little home wifi router.

Maybe that will come later. Their Brume router had a Brume-W version with WiFi.

and they “crowded” all ports on one side…

Isn’t it desirable? All my routers have all ports on one side. That makes cabling neater.

Definitely. For a device placed on a shelf, the thing you don’t want it ports on two sides! Especially when they’re this small and you’re forced to curve cables. However when used as a sniffer between two devices, one per side is more desirable.

Regarding the 2.5gb wan, its most likely the leanest variant of that generation chipset for gl.inet, as jean-luc said.

I’ve always enjoyed the gl.inet products and preordered their opal.. This new brume2 is tempting, but waiting to see what their onboard cellular lineup looks like.

Can this act as a router ? I already have a WAP, can I plug this between my modem and my WAP and provide web access to my house ?

Yes. Several of the gl.inet devices make perfect travel routers, depending on the specs you need (cpu cores, memory, WAN/Dual Lan, etc). Openwrt makes it semi-easy to customize a configuration if defaults do not fit your needs. I purchased a Spitz v2 x750 and ended up removing the ec25-af and put it in an external enclosure and move it between an x750 and sft1200 opal. The opal even runs adguard home with a basic config. If you need a portable router with advanced router features, the brume 2 looks like a good choice. I can’t say enough nice things about… Read more »

I don’t plan to use it as a portable router. Is it powerful enough to be my home router and sit between my ISP modem and my WAP ?

It solely depends on your bandwidth. I had been using their very first entry-level device (6416A) as a wifi router a while ago and it was already pretty decent (~70 Mbps). Here we’re talking about a device that’s at least 10-20 times more powerful than my old one. Usually gl.inet publishes honest network test results to help their customers compare their products. If there’s none yet, just ask them, they’re usually pretty responsive.

Yes. Gl Inets 2021/2022 model lineup has the performance to satisfy many home router users. Glinet also provides years of software updates and does not abandon their hardware (as willy pointed out). I call it a travel router because it fits in your pocket 🙂