The company has not published any information publicly, but a post on Weibo social network reveals additional details with the single board computer being equipped with 2GB LPDDR4X, 8GB eMMC flash, two USB 3.0 ports, HDMI video output, and more. 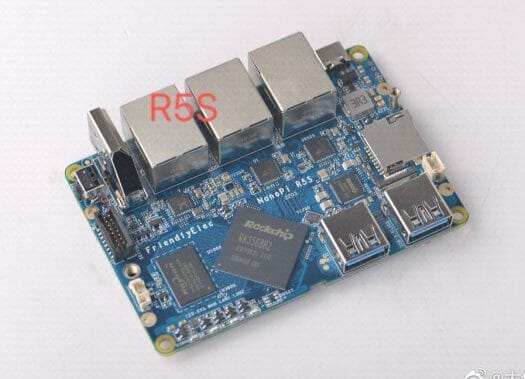 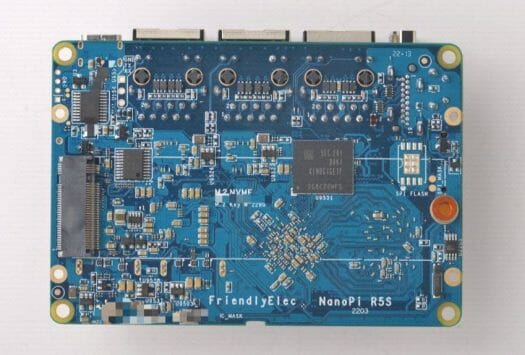 There’s no information about software support at this time, but FriendlyELEC usually provides Ubuntu Core and OpenWrt based images respectively called FriendlyCore Lite and FriendlyWrt for their NanoPi R-series board, so I’d expect the same for NanoPi R5S. [Update: The Wiki is online, and we have a clearer view of the specs. 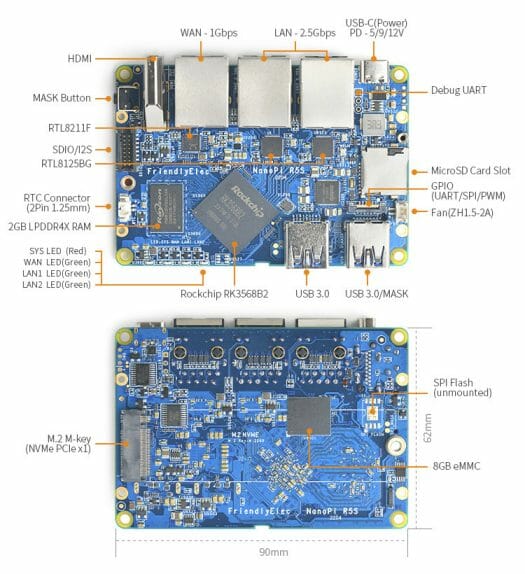 The board will most certainly be sold in a metal enclosure for cooling as suggested by the photo below, and the previous launches by the company. 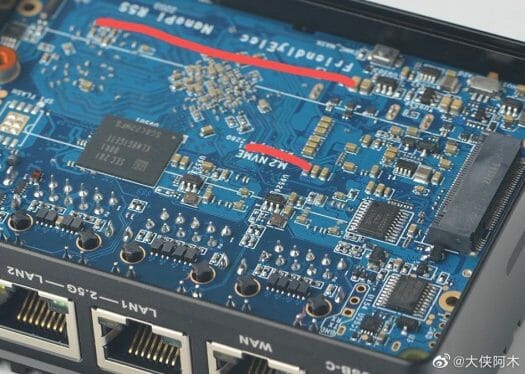 We do not know when FriendlyELEC plans to launch the NanoPi R5S board/gateway, but it should not be too long, as the board is already in the wild.

Pretty sad that WAN portion of this router isn’t 2.5G. Makes it pretty useless as a multigigabit gateway.

Since all ports have native controllers and aren’t sitting behind a switch, it should be possible to change what port does what in software.

what’s the point of an hdmi in a router ?

It could be used e.g. for seeing what you’re doing when installing some operating system? Besides which, there’s no law that says that a router can’t also do some graphical tasks as well.

Even if this thing here will be called ‘router’ it’s not the only possible use case. And such a passive HDMI socket most probably costs close to nothing.

The board can also be used for ‘cold storage’ (slow storage) by slapping a 5-port SATA controller into the M.2 slot. If there are 2.5GbE clients up to 2 of them get exclusive Ethernet ports while the GbE port is connected to a switch for example. And with the HDMI port this sort of NAS becomes simply a NAS / media player combo.

You could service way more then two clients with a decent managed switch. LAG the 2 2.5gbe ports together into a mikrotik sfp+ sw and you have upwards of 5gb routing traffic available to as many clients as your willing to chop it up.

Who cares? The point I tried to make is that if this R5S thing is a permanently on NAS you could easily use its 3 Ethernet ports to extend an el cheapo and already existing Gigabit switch with two 2.5GbE ports simply by using bridge-utils and ‘brctl addbr’.

It should be via 2.5GbE PCIe transceivers. But I can’t figure out which company the logo represents on the chip. It’s clearly Realtek on the GbE WAN port. But not sure about the 2.5GbE chips.

I thought it was MaxLinear first, but they don’t make PCIe based Ethernet chips. The only other option is Microchip, unless this is some new solution from a PRC player, at least if they’re connected over PCIe.
The logo doesn’t look right for Microchip though.

According to FriendlyElec’s wiki the GbE port is RGMII attached (RTL8211F PHY/transceiver) and the two other ports are PCIe Gen3 attached (RTL8125BG controllers). So the remaining PCIe Gen2 lane is for NVMe and if I understood the SoC’s multiplexing options correctly at least one USB3 port and NVMe are mutually exclusive.

Ah good. The Wiki did not show in a web search this morning, so I thought it was not up just yet.

‘Gaming’?! How I love all of this marketing BS!

I guess they needed a product to compete with Killer NIC, which is now part of Intel.
See: https://www.realtek.com/en/press-room/news-releases/item/realtek-s-new-generation-gaming-network-total-solution-2-5gbe-gaming-nic-with-dragon-feature-wi-fi-6-intelligent-switch-rtl8125bg-rtl8852ae-rtl9313-rtl8221b-wins-computex-d-i-awards-2021

Another “router” that isn’t going to be a great router. These chips lack a lot of features, but I guess it might work if it’s used for nothing else than a really basic router.

Same reason the fanless compact firewall posted about yesterday has one.

It can be interesting for some usage like compact storage (thought 2GB will limit the ability to run rsync). But I’m really really annoyed by the fact that they keep not populating the UART port! That renders the device useless once installed into a box: if it fails to boot, you need a screw driver! I think I’ve reported this to them many times with different devices already, including the fact that some of my friends and coworkers refuse to buy these machines for this exact reason and go to SolidRun instead. All this to only save $0.50 on a… Read more »

Yes, I’m precisely speaking about these ones which require a screwdriver to access. Because once everything’s fit into an enclosure you have nowhere to install a CH340E board and you need to resort to a drill and some glue, hoping that things will stay tightly attached together 🙁 I have an R4S, a really cool device. I never use it because I never remember what IP address it had last time and each time it takes me more time to try to recover access to it than to use my older clearfog.

I’m usually binding the MAC address to a specific IP address for devices that I use often. But you may have a bit more devices than I do in your lab, so it’s difficult to remember…

The problem is for the device I carry in my computer bag. Sometimes plugged at home, sometimes at work on my desk on the local LAN, sometimes on my desk behind another machine, sometimes at work in the lab, or sometimes at a friend’s, etc… And in the past there was also the @customer variation. So you have to try various IP addresses when trying to connect to it out of usual places, and it’s even worse if it was configured for DHCP and you don’t have it where it’s connected :-/ All that for $0.50.

I really don’t get why people deal with problems solved almost 4 decades ago (the AppleTalk protocol family: concepts ported over to TCP/IP over 15 years ago –> ZeroConf/Bonjour).

Addresses are for machines, names for humans. And mDNS does the job. Even Redmond’s crap learned it starting with Win10 and on Linux it’s usually just some avahi packages to ‘ssh r4s.local’ afterwards.

In plenty of technical places such as labs, that’s exactly the opposite. As you say, addresses are for machines. And when you’re dealing with configs and services and are setting up an end-to-end chain, names are totally pointless and only serve to distinguish machines in the prompt, and addresses are the only useful thing that remains consistent and readable across the setup. In addition addresses are the only readable element when you’re on multiple networks and are debugging. For example I’m using 198.19.<node>.0/24 for loopback networks, 198.18.<lan>.<node> for machines, This way you can have routes such as 198.19.x.0/24 via 198.18.0.x… Read more »

Your (initial) problem is: not remembering your R4S’s IP address.

And this problem is solved since 1.5 decades by DNS-SD/mDNS (link local service propagation). Even if you’re on a 10/8 network and your R4S has 198.18.1/24 (ping won’t work) as long as both devices are connected ‘link local’ the R4S will happily announce its 198.18.1.x address once you install avahi-daemon on it.

ZeroConf addresses a few different but related problems. It’s not only about assigning unique IPv4 addresses in case of missing DHCP server. It’s also about host/service propagation and discovery (exactly your ‘IP address not known’ problem). A customer’s Samba server as an example:

Link local addresses work also fine with IPv4. Stuff like ‘automagic service propagation’ as well. No need to manually fiddle around in .ssh/config. All that’s needed on Linux hosts usually is avahi-daemon and avahi-autoipd (w/o DHCP server the device then picking up a link local 169.254/16 address).

AFAIK unfortunately only RPi guys do it right: every RPi firing up with RPi OS is instantly accessible as raspberrypi.local (based on /etc/hostname contents).

Why dealing with IP addresses? Names are far more convenient. If your router is not crappy then it should support DHCP with dynamic DNS updates so regardless which IP address a host called ‘r4s’ will be assigned ‘ssh r4s’ will always work.

If the router is crap then ZeroConf to the rescue. On Linux hosts it’s usually installing avahi-autoipd and avahi-daemon and from then on ‘ssh r4s.local’ will work…

Just wonder whether OPNsense or OpenWRT will official ( or with source provided to build on our own ) run on these board, there is actually another similar board ( https://www.youtube.com/channel/UCCd3JHNT3B2KdhakLmMkYqA ) which runs same SoC, with two 2.5Gbe and two 1Gbe rj45 ports and two USB 3 ports. ( effectively exchanging nvme slot for another Ethernet port )

Technically not since RK3568 has two GMACs so it would be surprising if they use PCIe and not RGMII for the 2nd GbE port here.

It really doesn’t matter which sort of pictures Hardkernel is publishing (they utilized just a single PCIe lane on their canceled ODROID-N1 since they thought RK3399 could only saturate Gen2 x1 and not all 4 lanes).

Would’t put your hopes up for OPNsense or pfsense, there run on bsd and i haven’t seen much bsd support for sbc’s

And in fact Netgate (the company behind pfSense) ported FreeBSD to ARM devices so that they could be used with pfSense later: https://www.cnx-software.com/2017/11/30/netgate-sg-3100-is-an-arm-based-pfsense-firewall-appliance/#comment-549524

Great every day new product announcements. And invariably not available.

Sad story
What happened to the good times where electronics was always well available.

On Friendlyelec website for sale $59 bare board, +$16 with case