The device comes with 8GB RAM and 64GB flash storage, two 8K capable HDMI 2.0 output ports, one DisplayPort output,  one HDMI input, Gigabit Ethernet and WiFI 6 connectivity,  as well as a few USB 3.0/2.0 ports, plus support for a SATA drive. 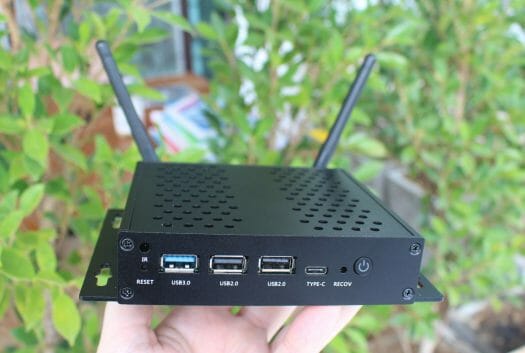 I reviewed the Rockchip RK3588 mini PC with Android 12 last July, and I was impressed by the CPU and GPU performance, 4K video playback capabilities, except for AV1 which was not stable at the time, and support for HDMI audio passthrough. Android 12 was quite stable at that early stage as well. Some downsides included the lack of a useful HDMI input app and USB 3.0 performance that could be improved.

I always test samples before adding them to the giveaway, and I initially thought I would have to skip the R58 as the red Power LED would just blink continuously and the system would not boot at all. But the company provided a link with the latest firmware images for the “Mekotronics R58 mini”, and I managed to reinstall the Android 12 firmware dated August 26 and see the Android launcher on my TV. If you’re not a fan of Android, Mekotronics also offers Ubuntu, Debian, and “buildroot” images for the mini PC. 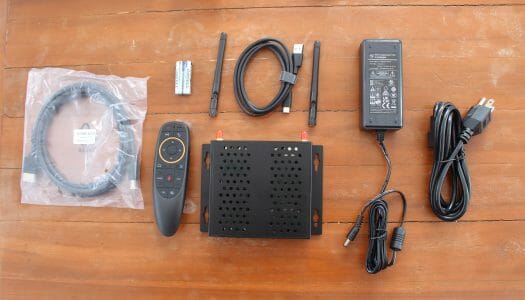 The kit given away features all accessories including the remote control, the power supply, the two antennas, and various cable. I’ve just removed the batteries because of customs regulations.

The Mekotronics R58 “mini” computer with 8GB RAM and 64GB eMMC flash, as offered here, can be purchased for $188 plus shipping.

I did not think NanoPi R5S record of 757 entries would be beaten anytime soon, but the Mekotronics R58 managed to do that, albeit barely with 764 participants.

Let’s run Random.org one more time… and a late entry win with #761.
Congratulation Thomas! I’ll contact you by email.

Got stuff based in spec great work desktop for most people

Nice prize, I live in hope but never win ☹️

I have several ARM computers but none with this SOC.

omg, I never win stuff and I’ll add this to the list lmao

Would love to fiddle with this! Lithuania

Belgium. This might be the sweetest cnx giveaway ever.

USA here.
Interesting design…would love to see if there’s a suitable capture capability with one of the “distro-based” firmwares…!

The RK3588 is the game changer in this spectrum of the ARM market and looks set to decimate AMLogic and co.

Hi there!
I from Vietnam

USA, Hope I win! I need something to learn docker and kube on 😎

I really enjoy your focus if the sure

Love this site! Thanks from the United States 🙂

Hello from France.
With this product will try to yocto myself an image to be used as a multimedia station

Would be very interested in winning this! This is Jan from the Netherlands

Thank you from Brazil

the Netherlands (NL)
Nice system to play around with!

Hello all from Brazil!!!

What the heck, I’ll give it a shot. David in USA.

Netherlands
This one I really like to test some time.

Got to be in it to win it. Hi from Australia

Nice device. I’m still waiting for my Rock 5B.
Will I win and get that one before ?
From France

Thanks for all the great reviews! Canada says hello.

Always good to go with a bang 😉
Greetings from Austria

Super kind of you, thanks buddy, even though I am new here.

One of, if not, the best offerings on the market right now!
Bulgaria

I see it can run Debian. Then this little box interested me. But three HDMI ports? I don’t have three displays to begin with 🙂

Thank you from Greece

Would love to have one of these to play with.
From New Zealand.

Good morning
From Canada the land of snow

South Korea
I love the webpage

Thank you from Australia!

Would be nice!
France

Sweden here! We are not many, but we deserve some representation in the raffle!

Enjoy reading your site from Canada.

That’s a great one to end on! Many thanks for the chance, from the United States.

Greetings on a sunny morning, from the Netherlands.

Thanks for all of the reviews!

Hi from Singapore, hope I can win this!

Thanks for all of the reviews!

Portugal
Keep up with the good work.

Looks good for many use cases.
Hong Kong

Poland
All best for cnx-software!

I hope to win
France

Poland, have a nice day

Hungary, keep up the good work!

I’m from Indonesia,
I’m excited to see Personal Computer based on ARM processors has gone this far. IMHO, Apple is the leader in this technology with it’s Ax ARMs and MacOS whereas Windows doesn’t seem to catch up with Apple. I hope Open Source OSes for ARM processor would have developed as good as it’s x86/x64 based, in terms of hardware support or hardware comapatibility

Cool unit for a channels dvr

From Indonesia, for educational purposes

Nice one. Hello from Japan

Hi from Belgium. This one giveaway is really nice!

Bulgaria, hope to be in the list of support states

Australia
Yo yo yo

Come and hack together in Spain!

Afternoon from beautiful Devon in the United Kingdom. Would love to mess around on this. Thanks for the kind gesture.

From the USA.
Thanks for the giveaways!

I would love to test this board and have a dozen different ideas! Please I’m going to be off my feet for a traumatic caused hip replacement. Working on this would be great. John Lawton McBrayer – Switzerland

USA
Thank you for sharing

USA I would love to use this machine on the back of my monitor.

Thank you for your reviews!
From USA

That’s a big bang! not only a bang 😀
Berlin, Germany

Worth a shot, really want to mess around with one of these as an android dev device though thanks to the Orange Pi they’re actually getting reasonably priced – United Kingdom

Please let me be considered

That’s a real bang! Thanks for the awesome giveaway week!
All the best from Germany

I’ve been looking for a Nvidia Shield replacement. And this device is perfect. My 8k projector and receiver is itching for a better and faster device to complete the setup. Great review!

Would love to try this machine out!
USA

This would be a great gift for my son that loves computers. He is getting ready to graduate high school a year early and think he would love to have this. Thanks for the great review.
United States of America

Germany. Thank you so much!

This would be my first non-phone android device.

Thanks for the great review. Looks like solid features at the price point.

Guadeloupe
Hello from the Caribbean, and thanks for the great work 🙂

I’m in from France!

Denmark
Nice home server for me…

This is the one I was hoping for. A chance to experiment without being the bank

USA
Would love this!

I would probably find some workload for it here in France 😉

I would love to check our the capabilities of this machine. I’m from the USA.

This is the USA here.
I am moving into a new home the first week of December. I would love this computer to experiment with Matter and home autmation

For a new project from South Korea.