HIGOLE introduced the GOLE1 mini PC with a touchscreen display in 2015 mostly to get a free and legal Windows 10 license, but over the years the company launched more Intel models inspired by the original design. However, their latest model, the GOLE 1 R, is based on Rockchip RK3588 octa-core Arm Cortex-A76/A55 SoC instead and running Android 12 by default.

The GOLE 1 R is equipped with 8GB RAM, 128GB eMMC flash, a 5.5-inch touchscreen display, Gigabit Ethernet and WiFi connectivity, a microphone, speaker, a gravity sensor, and a 2,500 mAh battery. The company also sells the GOLE 1 RN mini PC without a display, a microphone, a speaker, or a battery for power. 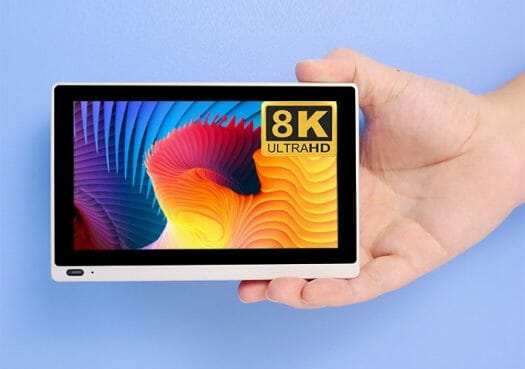 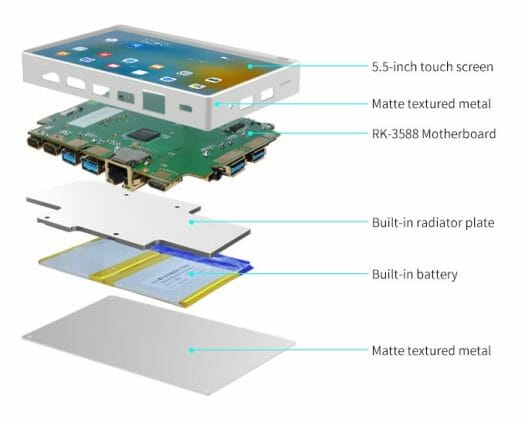 The fanless mini PC/thick tablet ships with Android 12 by default without Google Play support, but the company claims Ubuntu and RTLinux are also supported. An SDK will allegedly be offered alongside hardware schematics and drivers for the device.

The devices have launched on Kickstarter with the GOLE 1 RN mini PC going for around $300 US, and the GOLE 1 R mini PC with integrated display selling for $353. Those prices will be hard to swallow, especially for the mini PC since it does not really differentiate itself from other Rockchip RK3588 mini PCs, but the GOLE 1 R is more of a unique product and it may have domr takers. On the positive side, shipping is included in the prizes, and deliveries are expected to start in December right after the crowdfunding campaign is over.

Via Liliputing and Notebookcheck

Well it’s cute, might have usable passive heat-sinking. And as to the price…
Nearly everything has doubled in price where I live. A bare 8gB Radxa Rock5 sells for 309€ on amazon here. The Firefly ROC-RK3588S-PC bare board sells for 500+€.The Jeton Nano which I paid a ‘ripoff’ 130€ for, three years ago now sells for 349€
Turns out The Great Reset was code word for “inflation”.

In fact at €300 onwards it’s competing with much stronger (but still small) systems.

The RK3566 is positioned as Rockchip’s ‘affordable’ SBC chip. But it only has A55 cores. With the RK3588, they’re trying to enter new markets as a low-end Mac Mini.

But yes, the price isn’t compelling. HDMI-in could be a killer feature but reviews haven’t been glowing about software support.

Laughable 3 hour battery life when handheld ARM64 devices typically last for days shows the limitations of shoehorning in a desktop CPU. If that isn’t Rockchip’s focus, I would expect Pine64’s next smartphone to be RISC-V based.

Asides not being convinced anyone at Rockchip wasting a though on SBCs or things like a ‘low-end Mac Mini’ your comment about the battery life being related to a ‘desktop CPU’ completely misses the use case: that’s actually using this thing with a display on battery so the majority of juice is sucked up by the display’s backlight as with every other such device regardless of CPU/SoC type.

Single RAM chip, so half bandwith… So it’s a stupid design. Why using such high preformance ARM core and killing it by not using full bits wide RAM capability ?

It does not work that way on Arm.

‘Single RAM chip, so half bandwith’ is nonsense regardless of the CPU’s ISA.

On x86 Jasper Lake thingies the performance difference between single-channel and dual-channel is negligible while an ARM Phytium D2000 box (octa-core A57) shows halfed memset scores but other than that same performance. In general even if there is a somewhat significant difference in memory bandwidth only a few use cases – mostly video/framebuffer related – are affected, see Hardkernel’s observations for example.

On shared memories, it always happen.