The new model follows the Station M1 and Station M2 mini PCs with Rockchip RK3328 and RK3566 respectively and will deliver 4 times the CPU performance and up to 8 times the 3D graphics performance compared to the M2 model, but in a slightly larger and about twice as thick enclosure – probably for active cooling – than the first two Station M fanless mini PCs. 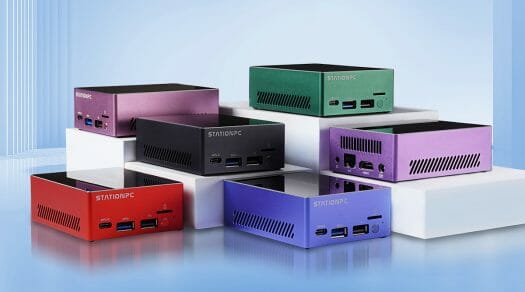 Except for some internal connectors which are not accessible from a mini PC, the hardware specifications are basically the same as the ones for the Firefly ROC-RK3588S-PC SBC, so it should safe to assume the Station M3 is based on that board. By default, the mini PC ships with Station OS, an operating system based on Android with multimedia and retro-gaming in mind, and a brand new UI, but also supports Android 12, Ubuntu 20.04, and we’re also told UEFI boot is supported (TBC). The wiki has not been updated for Station M3 just yet.

Firefly has not provided availability and pricing information just yet, but you should eventually be able to purchase the Station M3 mini PC through the product page, where you’ll find a few more details at this time. But for reference, we can check out ROC-RK3588S-PC pricing with the 4GB/32GB configuration going for $219, the 8GB/64GB model for $299, and the 16GB/128GB for $409. Add $20 to $40 extra for the enclosure and potential accessories, and that should be a fair estimate of the price.

How good is the Android OS on those things ? I’ve transitioned elderlies around me to Android desktops (Windows is too complicated, I’m unimpressed by ChromeOS), and it’s hard to find good quality hardware and software in this space – I’m using 3rd-tier TV boxes that work so-so, have weak/touchy wifi…

This thing seems seriously made. But is Android an experimental afterthought, or production-ready ? I’ll need to tack on a webcam, a printer, … and for it to be generally stable. I’ve been looking at dev boards, but same issue: is their Android good or bad ?

WiFi was fast and stable, but I haven’t really tested the device as a desktop machine, because I find Android to be a pretty bad desktop OS, copy/paste is inconvenient, background programs may be killed at any time without warning, etc…

But I understand some people seem to like Android as a desktop…, and in the past USB webcams could be hit and miss (it depends on driver support), and I’m not sure about printers. Networked printers may work better (TBC).

Thanks for your reply ! I’ll try it then. I’m not saying Android is a good desktop OS. I’m saying it’s the least bad for tech-averse and, frankly, by now cognitively challenged 80+ seniors. Windows, Linux and ChromeOS work for other situations, but not this one. At least Android is the same than on their phone and tablet, so both the UI and apps are familiar. Bog-standard webcams usually work for Skype and Duo. I’m currently using old TV Boxes, H96Max IIRC; something Core A7x + 4GB (RK3399 ? The first such high-spec H96Max), but they’re on Android 6, wifi… Read more »

Don’t your cognitive challenge 80+ (nootropics and Elysium Basis!) who need newer 8k upscaling outside the 4k or 8k television’s demand stable support for PS5 controllers and static recompilers of Steam to work on Arm?

Srsly, besides Star Crossed Anime reviews of what to watch, aren’t sturdier Bluetooth gamecons a strong need? Everything seems to like to go woggly in charging or Bluetooth connection… 4.1 available here might do, or need we the 5.2 usb adapters?

And yeah, maybe those crazy porous heatsinks from England.

> I’m saying it’s the least bad for tech-averse… I did the following with some success: Install Gnoem. Install a tiling extension. Set the tiling extension to default on Tabs layout. Default the browser to open in new windows rather than tabs. This converges window and tabs management into a single paradigm and disable minimizing and window resizing so they don’t have anything to be confused about other than file management. It also makes sure Start is used for both running new applications and navigating between Tabs like how Chrome works with the Recents button on Android so it’s all… Read more »

I too have an original H96Max, it’s indeed an RK3399 with 4G RAM. The hardware is nice, even still is by todays standards, but was sold as e-waste and definitely is. I never managed to fully boot a mainline kernel on it despite having tried hard, and with the DDR initialization hard-coded in the bootloader, which doesn’t accept boot params, you’re left with very few options to turn it into a usable machine. In my case it’s not dramatic because I bought it as a development machine because I wanted an A72. In your case, what is sad is that… Read more »

Androids on those devices are presentation quality level. Useful to make sales and also to mask things up so we are unaware what kind of software garbage is behind. This is not high end Samsung / Pixel phone where Android works as expected.

I think that at that size, they should really have gone with a large heat sink enclosure instead of drilling holes and using a fan. Many mini-PCs are made this way and not only the heat is better spread, but they’re silent. At this price range, mini-PCs become serious competitors. First, you can install any real operating system of your choice on a PC, not just this crippled android thing designed to only run applications that can be operated with a single finger. Second you have less chances of seeing a mini-PC become e-waste in 3 years since updates are… Read more »

With these kind of price, I’ll certainly go with x86. I’ll only buy this if my use case is using Android.

Where does this number originates from?

The article above copy&pasted ‘0.42W (12V/35mA)’ from the product page which is a rather questionable number given that I measured with RK3588 the HDMI PHY with an inactive display already contributing 0.35W to consumption.

The lowest functional ARM SBC that I have tested is 2.2W (Odroid N2). I don’t know there’s something out there that idle at 0.3W.

Hehe, even @dgp’s Breadbee takes roughly 0.4W in idle, and is totally cold to the touch.

Yes, and understandable with the A7 ~1GHz core and minimal-almost-bare peripheral (minus things like pcie to usb chip, hdmi, audio, etc).

I think any 64bit x86 based systems mentioned above can run android X86. There is a open sourced x86 version of android for them.

Yes, but sadly, it’s not optimal as far as i know. There’s apps or games that compiled just for ARM SoC.

Android doesn’t limit it as a machine so much as its out of control oom killer and crunchy filesystem. Next-gen Google mobile OS please, though! Oh, you’re looking for decent M.1 and .2 SSD storage! Aiming it at gigabit Ethernet storage is the only saving throw I suppose? Oh and then there’s the need for either this cpu or the one in the 4K TV to track (near) touch. Not normally included, needs some IR multicamera accessory… What is the use case for the case grilles rather than openness? Little snakes filling up all these micro pcs? Is that not… Read more »

Zut! Retrogaming but with a matchmaking foyer, maybe this could be powered by exercise if AR glasses projection is enough. A bit of a use case upgrade to the chassis.

I think most of the users on sbc world use them as headless server. Otherwise I never seen a specific project. What I need is one or better 2 multi gig eth, m.2 for the os(with dedicated bus), SATA (all you can eat), h265 hw encoding (for a plex server maybe), good heatsink (great a passive one), usb bridge (with dedicated bus). That’s all.
What I pay and don’t use: Bluethoot, 3 HDMI, wifi, emmc. For these things they can add a m.2 for optionals.

I have the same look to this segment of devices. I have seen progects like this https://shop.kobol.io/product/helios64-full-bundle/
But all of them gone from market. Who knows whi?

Here’s the link to our article https://www.cnx-software.com/2020/01/03/kobol-helios64-rk3399k-sbc-5-bay-nas-pre-orders-to-start-next-week/ in case the Kobol website gets taken down lateron.

The Kobol project got discontinued due to supply shortage and “being burned out”. Not sure about the others.

they announced Helios64 a few months before the Covid pendemy, and started the pre-orders at the beginning, they found themselves in production phase with all China in lockdown, the indelicate customers started to get angry and to put the pressure,  instead of refining the software and testing the hardware, they lost 6 months to do logistics, in the end some promises made during the pre-orders were not kept on the hardware and software part, it was a disaster, most of the Armbian images were broken, There were 5 to 7 mainlines at Armbian but only two/three were correctly maintained on… Read more »

> Kobol did not want to sell the motherboard alone

For me, from day one it was their biggest mistake. I think that for them it was a way to make the price more acceptable, but if some were willing to order the board alone, why reject their offer ? I could possibly have ordered one, but I wasn’t interested at all in the bulky enclosure that came with it.

Yeah I do have an M4 and I seriously thought about this one, but in the mean time I also thought I’d rather try to use 2 NVME devices. But my M4 remains on top of the candidates list for now.

If I compere it with https://www.gmktec.com/products/intel-11th-jasper-lake-n5105-mini-pc
It is too expensive 🙁