The hardware is basically the same as the Brume 2 (GL-MT2500A) security gateway, except it adds support for WiFi 6 connectivity and as an AX3000 router more than doubles the bandwidth compared to the earlier Beryl (GL-MT1300) AC1300 router. The company has sent me a sample so I’ll start the two-part review by checking the specifications, doing an unboxing, and tearing it down to have a closer look at the hardware design, before trying out OpenWrt and testing WiFi 6 and 2.5GbE performance in the second part of the review. 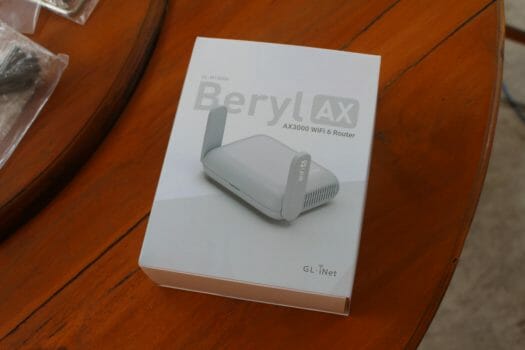 The router runs OpenWrt 21.02 with Linux 5.4. The firmware, mobile app, and detailed documentation are provided by the company. Note that both the system memory (512MB vs 1GB) and storage (256MB NAND vs 8GB eMMC) have much lower capacities than in the Brume 2, so some of the features may be missing, albeit the company still lists WireGuard, OpenWrt, and AdGuard Home, so we’ll find out when testing the software part. The router also consumes more and is quite heavier than the Brume 2, even than the “A” model with a metal enclosure. We’ll find out why in the teardown section.

Let’s open the package to take out the router together with a 5V/3A USB-C power supply along with US, EU, and UK plug adapters, and some basic documentation, as well as a Thank You card showing coupon “THANKS10” for a 10% discount on the next purchase on the GL.iNet store. 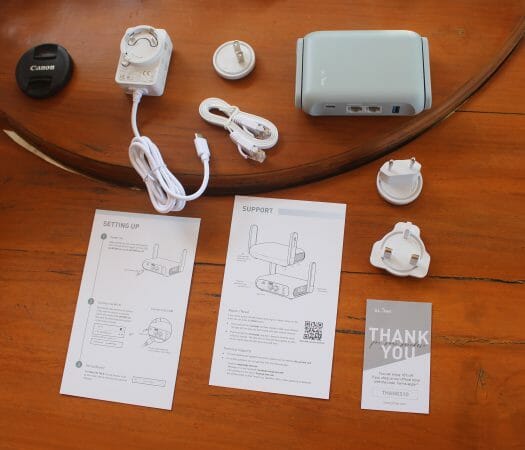 We’ll find the USB Type-C power input, 2.5GbE and GbE ports, as well as the USB 3.0 port on the rear panel, 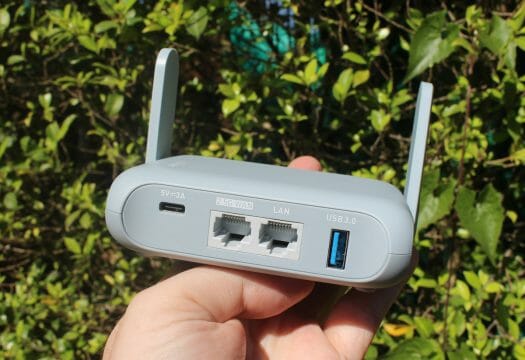 and if we adjust the external antennas vertically – as they should be during operating – we’ll see the reset and toggle buttons.

There’s also a status LED at the front of the device not shown in the photos above.

We’ll need to remove the rubber pads and loosen the four screws underneath to open the enclosure for the “GL.iNet AX3000 WiFi 6 Router”. Note there’s a depression under the sticker, but there aren’t any screws there. 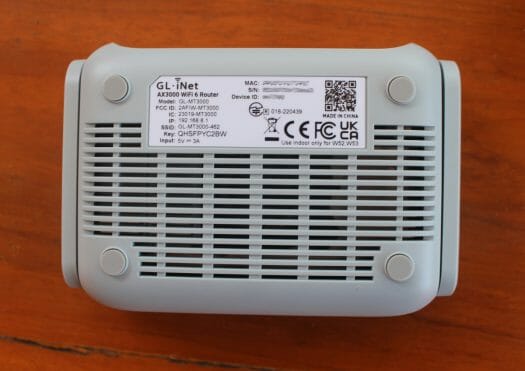 I had to use a tool to unclip the top parts of the case. The biggest surprise to me is the presence of a fan on a fairly large and thick heatsink as I don’t think I have ever seen a router that’s not fanless. That explains the larger weight, and it should not have been that surprising since I was told last year that WiFi 6 (802.11ax) consumes a lot of power and cooling can be challenging. 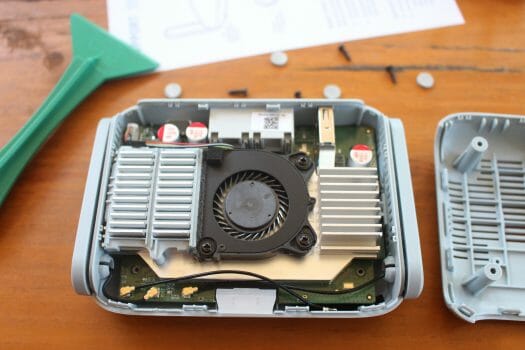 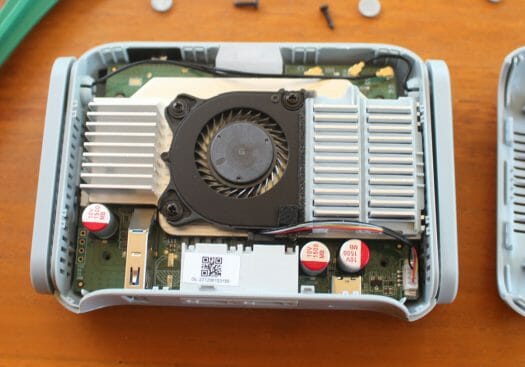 If we turn the device around, a 4-pin UART header for console access can be seen, and the fan comes with more than two wires so it should be controlled with PWM and not always on. I tried to take out the board, but it did not come that easily, and I did not want to mess around with the thermal solution before testing the router, so I stopped there. GL.iNet does provide an internal photo with clear markings. 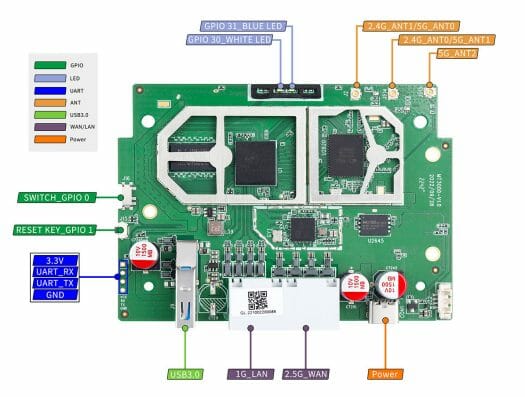 It turns out the internal antenna is for 5GHz WiFi, while the two external antennas are used for both 2.4 GHz & 5GHz WiFi. The 2.5GbE port is implemented through an MXL (MaxLinear) Ethernet PHY that should probably be the GPY211.

That will be all for today, the next step will be to connect the router and check out OpenWrt and its main features, especially WiFi 6, as the rest will be similar to the Brume 2. I’d like to thank GL.iNet for sending the GL-MT3000 “Beryl AX” pocket-sized router for review. It’s not available for sale just yet, but you can register your interest on the product page if you’d like to purchase the router at launch.

That fan makes it a no go, regardless of specs.

All the new routers overheat under heavy loads:
https://amzn.to/3IzNO6a
https://s.click.aliexpress.com/e/_DEIiwF5

GL.iNet simply supplied the required cooling solution built-in instead of pretending the problem doesn’t exist like everyone else.
What I want to know is whether it’s turned on constantly, under specific heavy loads via some script or triggered by a temperature sensor.

The real problem is that a tiny fan costs less than a large enough heat sink but that’s no valid excuse for an infrastructure component that’s supposed to be 100% up. Plus glinet devices are often portable enough that you can use when traveling. Imagine a hotel room with this fan while you’re trying to sleep.

But this large heatsink will either massively increase enclosure size when placed internally or has to be on the outside as part of the enclosure. And for consumer products I don’t think anything that feels ‘hot’ when touched is an option since consumers consider effective heat dissipation being ‘overheating’ and as such their device about to die soon…

You could easily detach the fan using the header cables, no desoldering.

I have my 3D printer in the same room with me. I doubt this tiny fan is going to be loud enough to bother at all. Besides that: When you sleep you don’t need to have your router running. Turn it off. You making it seem like a bigger issue than it actually is. I would be more concerned about dirt etc. getting into the fan. A larger heatsink doesn’t solve all issues though. Especially in the context of traveling, where you may use that router in an extremely hot environment. I guess the fan is just going to do… Read more »

White noise to help you sleep

> What I want to know is whether it’s turned on constantly, under specific heavy loads via some script or triggered by a temperature sensor.

Hopefully Jean-Luc will answer this in part 2 of the review.

We learned just recently (by monitoring all client machines as well) that the internal fan(s) of the laptops majority of our users are equipped with have a fan that is constantly on but inaudible below 2000 rpm and gets noticeable only north of 3000-4000 rpm.

They’ve started taking pre-orders starting at $69 with free shipping for the first 100 pieces.
The retail price will probably be $89 plus shipping once the pre-order campaign is over.

in most modern consumer network devices the WAN port is more of a designation than a technical limitation. If the software allows it, you can configure it to do as you wish. From the openWRT Forum “go to WAN physical settings and detach eth0 from there, or delete the WAN network entirely. In a dumb AP, there is only one active network– lan.”

sneaky inclusion of the coupon code. Thanks.

Please try out, if it is usable for PLEX Server PASS.
And is the USB3 as a poor men NAS/ or even with a USB Hub usable?

Article correction: The 2 external antennas are dual 2.4 and 5 Ghz, in addition to the internal 5 Ghz antenna.

FYI: I own the Slate AX travel router, which has a quad-core SOC, and I’ve never heard the internal fan turn on.

Do you really think the generated heat relates to those few Cortex-A53?

The MT7981B in this dual-core box here was on 5.4.211 few weeks ago so it seems covered by a real LTS kernel that gets security updates.

I hate anything with fan. I would buy it for that reason.