A couple of months ago, we wrote about GL.iNet Mudi portable WiFi router with built-in 4G LTE connectivity and supporting features such as the Tor Project, up to 25 VPN providers, and Cloudflare DNS over HTTPS or TLS.

Mudi was launched on Kickstarter and should start shipping very soon, but I was informed about another OpenWrt travel router from the company with GL.iNet Slate also supporting many of the same features, but doing away with built-in cellular connectivity and battery. 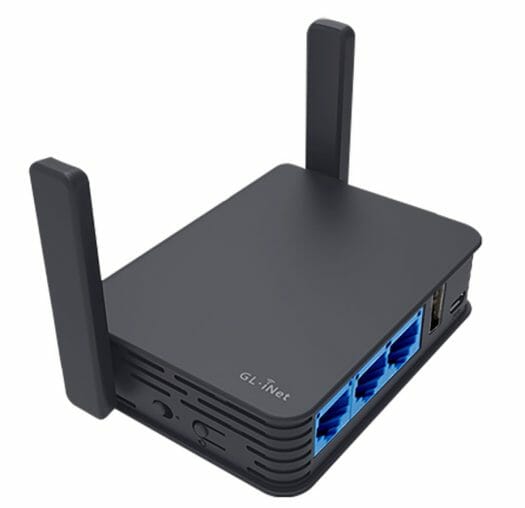 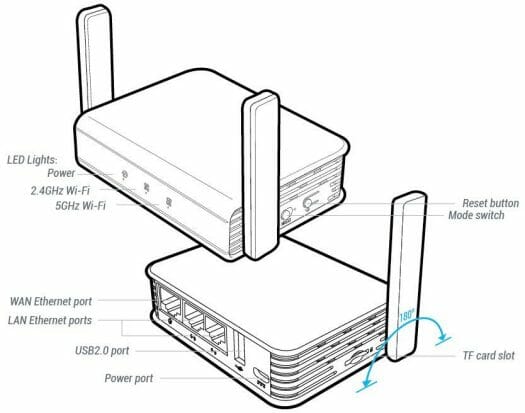 The USB port can be used to connect external storage (formatted with FAT32, NTFS, EXT4, EXT3, or EXT2), and 3G/4G LTE USB dongle. The router can be connected to the Internet over an Ethernet cable, in repeater mode, via a cellular dongle, or using tethering to your smartphone over the USB port. Secure communication can be configured with OpenVPN, Wireguard VPN clients/servers, or the Tor Network, and Cloudflare DNS over HTTPS or TLS can be optionally enabled in the user interface as well. You’ll find everything to get started on GL.iNet Docs website. 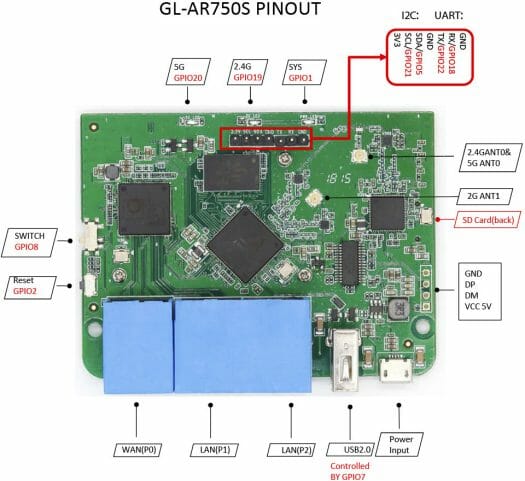 We can see 7-pin on the board for I2C, UART, and GPIOs, but those are not controlled from the user interface, and you may have to drive those from the command line or your own daemon.  GL.iNet provides source code for U-boot,  but I can’t see anything specific for OpenWrt from the company themself, and instead, you’ll find firmware and instructions on OpenWrt website. There’s also an alternative community firmware called ROOter GoldenOrb.

GL.iNet Slate travel router can be purchased for $69.99 on Amazon.

Thanks to Kelly for the tip

Shame they use the micro-usb for power only and not to connect the device with your pc as external wifi/ethernet card. The Gl.Inet Brume can do this, but the brume is rather expensive and doesn’t have wifi, yet (seems it is there but they don’t activate it due to software issues -> https://forum.gl-inet.com/t/brume-with-wifi/8289 )

Indeed! I have been in discussion with the manufacturers about respinning the board with the USB ports rearranged somewhat, as only one of the two ports on the SoC can be used in OTG mode, and that port is currently connected to a USB hub that also provides the uSD card reader functionality.
Rewiring the board with the Host-only SoC port connected to the external USB port, and internal USB header via the USB hub/uSD chip, and leaving the OTG-capable port connected directly to the micro-USB port would be a perfectly viable option, as far as I can see.

Are the LAN ports connected together with a local hub/switch,or can they be used independently?

Yes, there is very granular control of routing between the wi-fi and LAN and WAN ports. You get direct access to the routing tables from the GUI and I assume from the command line as well – not that I am well-versed enough to do all of that. I am very impressed with the company’s devices and am using one now, connected to proton VPN via the built-in openVPN client. The SMB file-sharing is useful. I did have to install vsftpd manually – very surprised that it had SMB but not FTP by default – but is was no harder… Read more »

RPi has more memory and CPU power if you need to route a lot more, say 500 Mbps worth of pirate movies via bittorrent.

Jerry, will you ever stop promoting piracy ? You’re doing a big disservice to the community you claim to represent (RPi).

This is not a new device.

@Jean-Luc Aufranc (CNXSoft): With regards to sources, GLInet have a fairly active Github account, with OpenWrt and uBoot mirrors, amongst other things:

Also, if you are looking for Qualcomm datasheets, there is a handy github repo at https://github.com/Deoptim/atheros with a LOT of datasheets collected from various locations. A useful resource, which even has a (slightly) more recent QCA9563 datasheet than the one you linked above.

thanks for posting that. I just downloaded, made an account, and logged in. Looks great so far!