This webinar is divided into 2 parts:

There was no external files for this webinar, so I created 2 PDF with the most relevant slides for your reference:

Frederic Gaillard shortly explained the Smart Grid Ecosystem and it’s different components as you can see in diagram below. 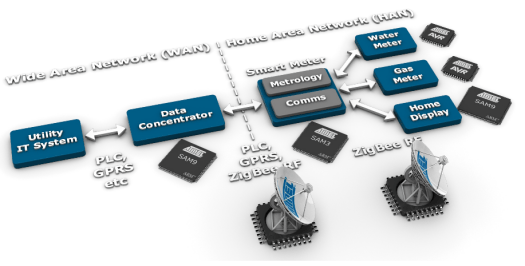 The Smart Grid is divided into two zones:

In this environment, the smart meter just acts like a gateway in an IP network.

The presenter then goes on explaining the main benefits of IHD that is understanding one’s consumption and changing one’s behavior in order to save money. He also goes through the list of possible interfaces to display consumption data such as PC (inconvenient), smartphones (small screen), Tablets (not widespread) and In-Home Displays that are especially designed for this purpose.

In the second part of the webinar, Gordon Cameron focused on the software for the user interface of In-Home Displays for the Smart Grid. 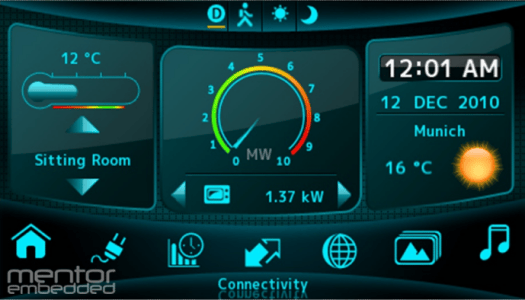 First , he emphasized on the wide range of communication requirements for IHD software both in the home (security, appliances, lighting, heating, meters) and outside (alarm company, internet access, remote user access, energy supplier).

He carried on showing a slide with developments board for Smart Electricity Meters (based on SAM9G10) and In-Home Display (based on SAM9M10) both with LCD displays.

The next step was to explain the traditional UI development flow with the Design phase(UI Designer), the Implementation phase (Software Engineers) and the Test phase (QA team, UI Designer, Customer) and its shortcomings: long implementation time frame, changes of customer requirements during the implementation or worse at the marketing phase requires to go through the whole loop…

The proposed solutions to this problem was Inflexion a development suite with a Graphics Engine (2D/3D support, Open GL/ES..) and a UI Implementation tool (Inflexion UI Express Tool) using simple drag and drop operations and allowing to preview the UI (WYSIWYG) before packing it and loading it to the target. This suite allows the UI part and the main software part to be separated allowing to make changes to the UI without making change to the software.

This results in a shorter development time and faster time to market. 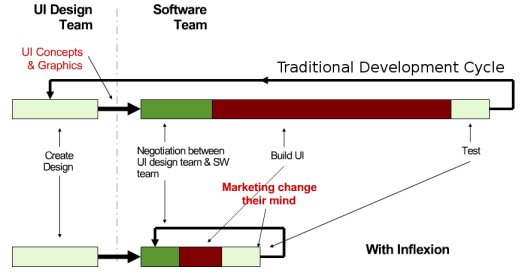 In the final part of the webinar, a smart grid display is showcased (for about 3 minutes) where they show different rooms’ temperature, the real-time power consumption and billing per device (e.g fridge, microwave, tv…), the monthly and yearly power consumption (with charts)  and weather data. The IHD also allows you to adjust the temperature & light of every room to reduce your electricity bill. A web-server is also running in the IHD which let you connect remotely through a web browser to check your power consumption and/or adjust your consumption, for example if you forgot to turn off your lights (or air-conditioner!) before going to work.