At the end of last year, ARM announced ARMv8, the first ARM 64-bit ARM archtecture, and last week at ARM Techcon 2012, ARM announced the first ARMv8 cores: Cortex A53 and A57. But since there’s no silicon at the moment, what if you wanted to develop code running on ARMv8 before the hardware is available? The answer is: Fast Models, a Virtual Platform (VP) to accelerate software development. This is especially important for ARMv8 since hardware is not expected to be available for another year. In this post, I’ll first show how to run “Hello World!” in ARMv8 fast models, then we’ll run ARM Linux 64-Bit (Aarch64) in the virtual platform.

In order allow the developer’s community to program for ARMv8 (Cortex A53/A57 cores), ARM has made ARMv8 Foundation Model, a virtual platform, available free of charge.

Let’s work in a terminal window, uncompress the file and run the “Hello World!” application.

That’s it! Details are in in the document: DUI0677A_foundation_fast_model_ug.pdf, including instructions to access a web interface to monitor the machine, access to UART and more. hello.axf is a file based on “ARM Executable Format” that contains executable binary code generated with armlink linker part of the Keil ARM Compilation Tools. You can check the Makefile in the examples directory to see how armcc and armlink are used for the ARMv8 architecture.

Now let’s do something a bit more interesting by running Linux (OpenEmbedded) in the v8 foundation model. The instructions I followed are available at http://www.linaro.org/engineering/armv8.

Run OpenEmbedded in the virtual platform:

After a few seconds, a terminal window (Telnet attached to UART) with the kernel output should pop-up: 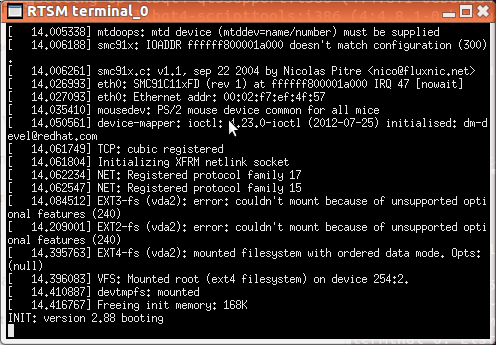 Be patient, and after several minutes (12 minutes on a PC based on Intel Core 2 processor @ 1.8 GHz), you should see the command prompt.
Let’s see if we really run on ARMv8:

Running Linux in ARMv8 is nice, but what you really want to do is write and build programs for the platform. Natively build programs inside the foundation models is probably not a good idea for most programs, since it would be quite slow, so you’ll have to cross-compile for Aarch64. I’ll build the “Hello World!” application as explained in https://wiki.linaro.org/HowTo/HelloAarch64.

Then write an  “Hello World!” program, and cross-compile it:

Let’s check the file is really a 64-bit binary:

Now copy it to the virtual platform, either by updating the rootfs, or via NFS or http, and run the program:

For more, there are other very useful ARM Linux 64-bit tutorials on Linaro website, such as:

And you could also try the minimal, LAMP or SDK Aarch64 images.

It’s also possible to run Android (32-bit) in the V8 models as shown in the video below (mainly an interview), but instructions do not appear available, and it’s not something I would want to try in my (slow) machine…

Hello, there’s an alternative – the buildroot guys recently added their AArch64 buidl support too. A quick step-through: git clone git://git.buildroot.net/buildroot cd buildroot make arm_foundationv8_defconfig && make It takes some time now. Then run the resulting images like this: ${LOCATION_OF_FOUNDATIONV8_SIMULATOR}/Foundation_v8 \ –image output/images/linux-system.axf \ –block-device output/images/rootfs.ext2 \ –network=nat Voilà. Now you have you own compiled distro. You don’t have to worry about downloading compilers and setting PATH, it’s all done for you. As a bonus you get the (almost) “latest” kernel: Welcome to Buildroot buildroot login: root # uname -a Linux buildroot 3.7.0-rc2 #1 SMP Tue Nov 6 06:06:00 EET… Read more »

@Nikolay Nikolaev
On my i7-3820 the simulator loads/runs pretty fast!
You definitely need a fast machine here.

Funny: the ‘file’ command does not yet know the ARM64 / AARCH64 structure:

My emulator is running, but without network.

After “udhcpc”, I have a network via ifconfig. Alas, I can’t get outside the emulator: traceroute only shows stars.

So … How do I get network running? Or, easier, how do I get files in and out of the emlulator?

@Sander
Well – yes, that’s a git ‘feature’ 🙂
Just leave it and see what happens in the end.

BTW I run “make menuconfig” and selected ‘links’ (it’s a popular textbased web browser).
When I run the image – udhcpc eth0. Then you can do: links google.com. See – it works.
I also had network problems with Linaro’s OpenEmbedded image – don’t know what is the issue there.

the make eventually succeeded, and I’m running the 3.7.0 Linux image. Problems
– still no network
– this image has no gcc 🙁

@Sander
Since it’s using NAT, you may have troubles accessing private IP addresses, but public addresses (i.e. The Internet) should be accessible (I haven’t tried).

If you want to use a local server, you can run to start the image with –network=bridged instead of –network=nat.

I did not use the network to copy hello binary to the rootfs, but instead mounted the rootfs and copied the file. The instructions are similar to what I wrote for the Raspberry Pi a while back:

Could you try your network connectivity within the ARM64 / aarch64 emulator?

@Sander
The VP is very slow on my machine, and I have to reboot to Ubuntu. It may take a while, before I try it again.

But are you using bridged mode? If so, the VP should not have its own gateway, but use one of the IP provided by your router.

@Sander
OK, maybe bridged mode does not work yet. Anyway, using NAT should be fine since 8.8.8.8 is a public IP address.
If you type “route” does it seem configured correctly?

There are many product news at the moment, so many things to read. I think I’ll try it this week-end.

Note to myself: ping/traceroute is NOT a good test. 🙁

Not able to download ARM V8 Foundation Model (FM000-KT-00035) after successful registration to arm .
After clicking on download now section under public download it is asking to accept the license aggrmnt and endup without any option to download.