Samsung Exynos 5 Octa processor is getting some competition with the announcement of Renesas AP6 processor at MWC2013. This SoC comes with the same big.LITTLE configuration (4x Cortex A15, 4x Cortex A7), but with a PowerVR SGX Series 6 ‘Rogue’ GPU, which, I assume, should outperform PowerVR SGX544MP3 GPU used in Samsung SoC. 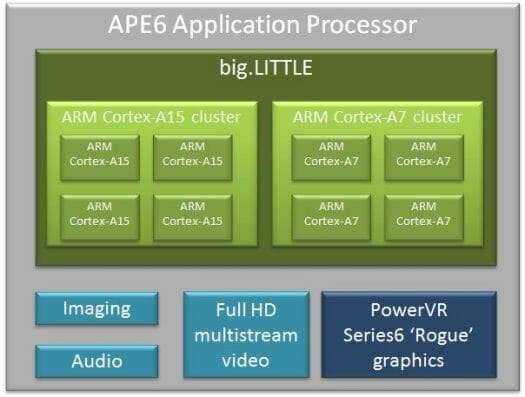 R-Mobile APE6 could be the fastest mobile processor announced to date, and is currently showcased at Imagination Technologies booth at MWC 2013 running several OpenGL ES 3.0 applications, as well as a demonstration of Rightware’s Kanzi Studio, “a PC-based real-time WYSIWYG editor for designers and embedded engineers to create and customize embedded 3D user interface”. There’s very little information about the processor, so that’s basically all I have for now.

But before I conclude, I’ll just drop a performance comparison chart between different PowerVR SGX series (source), since it’s the first mobile processor that I know of that has been announced with PowerVR Series 6 GPU. (LG H13 is actually the first, but it targets “home entertainment”, not the mobile space) 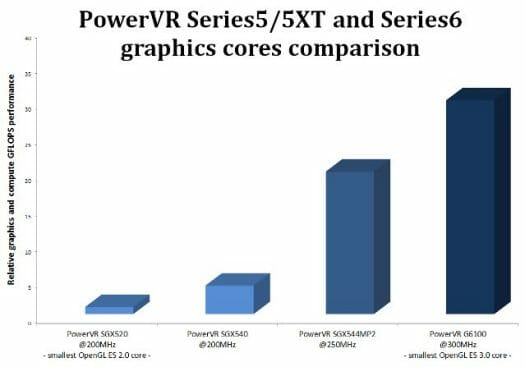 With over 30 GFlops @ 300 MHz, G6100 appears to outperform  any other ARM GPUs at this frequency. G6100 is the low-end version of the Series 6 series, and we don’t know exactly which one will be used in APE6 SoC.