At the beginning of December 2012, I wrote a post about Droid Stick A2 mini PC based on AMLogic AML-8726-MX to show some pictures of the device, but I could not really test as the firmware was not complete, and was promise a working firmware soon. Unfortunately, things did not really go according to plans for this hardware, so the firmware never showed up… Luckily, Kimdecent found another version of the device with basically the same specs, a slightly different casing, and more importantly a “working” firmware. The company was kind enough to send me another sample for review.

Here’s what the new Droid Stick A2 and its accessories look like. 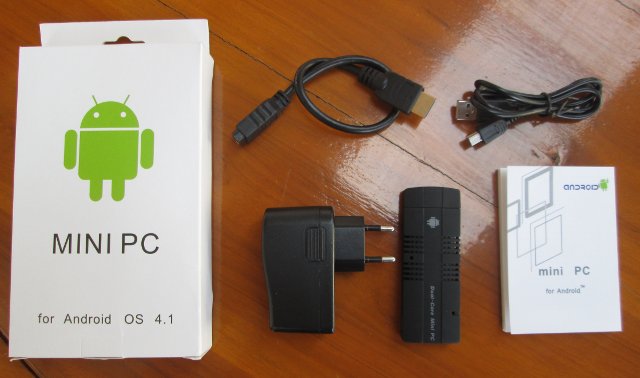 Beside Droid Stick A2 mini PC, the package contains a power adapter (5V/2A), a mini USB to USB cable, a short HDMI cable and a user’s manual in English.

A close up shows the device has plenty of ventilation holes, a mini USB and IR connector on one side, and a USB and microSD slot (Not shown in pic) at the opposite side of the HDMI connector. 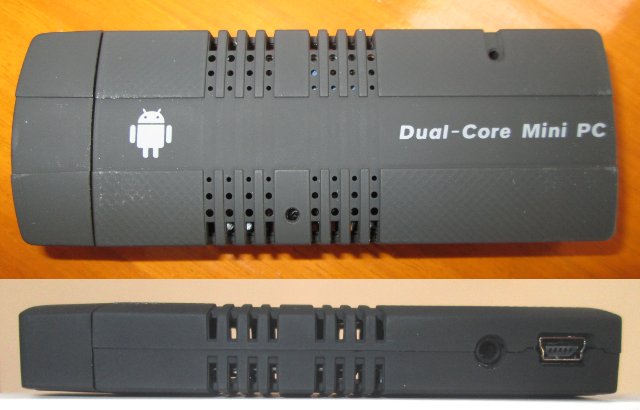 Let’s connect a keyboard and mouse to the device via a USB hub, connect the mini PC into the TV, and the power supply to the mini USB port. Within a few seconds, the Android Home Screen should appear.

There are 5 applications available from the home screen: the stock browser, a file browser, music, a (useless) movie player, and the settings. 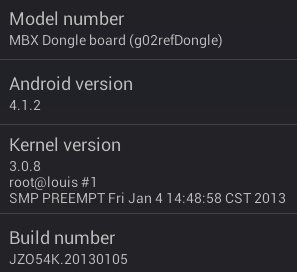 In the settings menu, we have options to connect to Wi-Fi, VPN and configure it as a portable hotspot. That’s it no Wi-Fi direct and no Ethernet support. As usual, the Wi-Fi connection was easy to setup. The soft keyboard will pop-up even if I have a USB keyboard attached. However, If you don’t like that you can always install Null Keyboard. The display section allows you to choose between 720p or 1080p (default) video output, but the UI is fixed to 720p. There’s also an option to adjust overscan and set the font size. The Developer Options are available , but the device is not detected at all when I connect it to my netbook or PC via the mini USB port. The “About Mediabox” section shows the model number is “MBX Dongle board (g02refDongle)”, that it’s running Android 4.1.2 with kernel 3.0.8.

There are just a few pre-installed apps on the device. and it looks like the mini USB port only carries power, it’s not detected at all in Linux or Windows, even after enabling USB debugging in the settings. The new firmware fixes Google Play, and I could install all applications I tried.

, the system feels pretty responsive and stable when using the web browser, checking emails and play videos. I’ve tried to power it up from the USB port of my TV, and it can boot to the home screen, but I will reboot at that time. I’ve also powered it from computers when I tried to access adb. My desktop PC’s USB port could not provide enough power to boot it (I used a USB extension cable), but my netbook USB port could. I’m also surprised at how cool the device is during operation.

There are two media players installed:

, I used those two players for video playback testing using videos from samplemedia.linaro.org and other sources played via a SAMBA share:

Video playback is quite good, as it can play the most common formats, video and audio codecs, without major issues. Sometimes it looks like it starts to play a bit too fast, so the first second may be choppy. However during playback, I had no problem due to buffering except for my camera’s videos, which means Wi-Fi performance is quite good as well. A 278 MB file copy between the SAMBA share to the internal SD card took 4m25s (1.05MB/s), which is still quite slower then Hi802 (1.42 MB/s), but still acceptable with the videos I tested.


I thought one of the main advantages with AMLogic AML8726-MX devices was it could already support XBMC (Android) with hardware decoding. Well, I thought wrong. First, I used XBMC Frodo RC3 for Android, and the UI was very smooth (about 40 fps), but I could not play any videos with hardware decoding. dman left a comment in another post explaining that “There is an official ‘test’ build from XBMC which has HW acceleration across multiple devices.”, so I decided to give it a try and download the latest version in http://ftp.heanet.ie/mirrors/xbmc/test-builds/android/ (xbmc-20130121-3fa9c61-android-hwaccel-armeabi-v7a.apk), but I soon found out that it would not work either, mainly because this version makes use of stagefright which is not supported by AMLogic and AllWinner SoC. I’m pretty sure we’ll eventually get a proper XBMC Android with hw video decoding for this platform, but just not yet, and the only option for now is to use XBMC with an external video player.

I’ve installed Antutu 3 and Quadrant on the device with some APKs, and ran the benchmarks.

Droid Stick A2 scores 8461 which is not bad for a dual core processor @ 1.2 GHz, and places the device performance between the performances of a Galaxy SII (Exynos 4210) and Galaxy Nexus (OMAP 4460). There was another annoyance during the benchmark: the screen rotated in portrait mode, which is quite inconvenient on a TV…

It’s one of the rare device I’ve tested, where the Quandrant benchmark can actually run properly, and the results look even better than with Antutu 3.0.3 with a score of 3181.

Let’s see what’s inside the box, and if there are many different with the first version of Droid Stick A2 dongle.

The very first thing that I’ve noticed is that they got rid of the massive heatsink from the previous version, so we can actually more of the top of the board. This side includes two GeIL RAM chips, AML8726-MX, and the Wi-Fi module (WL-211). We can also notice a proper Wi-Fi antenna, which can explain the good Wi-Fi performance of this mini PC.

The bottom side of the PCB features a microSD socket, the flash chip and 2 more RAM chipsets.

Initially, I was disappointed by the device mainly because of the Google Play issue, and the lack of XBMC hardware video decoding support. But the device actually operates smoothly, video playback is good, and Wi-Fi performance is better than most other mini PCs I’ve tried. So far I’ve found several issues that should be fixable with an updated firmware:

There are probably other issues since I’ve not tested that many apps. Full hardware decoding for XBMC would certainly be an advantage, although it’s also coming to other SoC such as Rockchip RK3066 thanks to the latest XBMC implementation using stagefright. The (apparent) lack of ADB support via the mini USB port could also be an issue for developers.

so it’s price competitive with Rockchip RK3066 mini PCs. [Update: I’ve informed that Pandawill sells what appears to be the same device, but called MX6, for $51.99]

AMLogic released the “common” source code for Linux kernel, which means we get most of the kernel source, except the part which is customer specific such as drivers, there’s a XBMC Linux port for AMLogic 8726-M3 processors so video playback and GPU drivers (but maybe not X11 accel) are available for Linux. On the contrary, Rockchip never did that directly for its SoCs, but a company released the GPL source code for a Rockchip RK3066 tablet, which allowed the developers’ community to port Linux to RK3066 mini PCs , and eventually release PicUntu. But video playback and GPU acceleration may be a challenge. It will be interesting to see how popular AMLogic dual core mini PCs become, and if the community builds on the platform.