If you need industrial grade ARM Linux boards with lots of Ethernet ports and several mini PCIe slots, you may want to check out Gateworks Ventana boards. The company has now released a smaller member of Ventana family with GW5520 SBC powered by Freescale i.MX6 dual, with two Gigabit Ethernet port, two mini PCIe slots, and support for PoE. 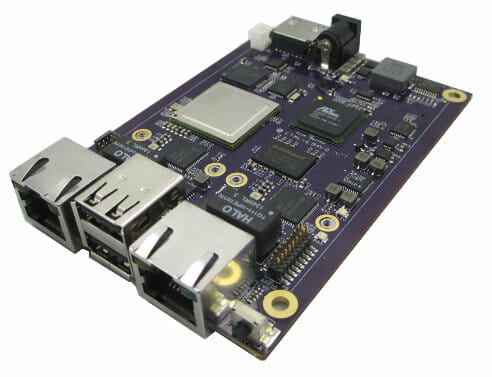 The company claims a 81.9 years MTBF at 55°C, but I’m not quite sure how this is computed… OpenWRT, OpenEmbedded Yocto, and Android BSPs are available for the board.. It’s also supported in mainline kernel since Linux 3.18 release. Documentation is available on Ventana boards Wiki.

Based on the block diagram below, they don’t use the GMAC inside i.MX6, and instead connected an external Gigabit Ethernet via PCIe, so they should not be subject to the 470 Mbps known limitation for Gigabit Ethernet on i.MX6 processor. [Update: The company confirmed that, and they measured 940 Mbps on their Ethernet ports]

Gateworks also offers  GW5520 Development Kit which includes GW5520 network computer, U-Boot bootloader, OpenWRT Linux Board Support Package, Ethernet, serial, USB, audio and video cables, as well as a passive PoE power injector and a 24V power supply, and a JTAG Programmer.The network board appears to be available now selling for about $400 on Avnet, while the development kit goes for around $500. You can visit Gateworks GW5520 product page for details, including download links to the datasheet and user’s manual.

All the info on the web suggest 470Mps limitation for the i.MX6, though it might no be affecting PCIe controllers.

@dhead666
The 470 Mbps limitation is with the MAC on I.MX6. The link above is for gw5400, and they use the Mac for eth0, hence the limitation.
But gw5520 does not use the internal Mac at all, only pcie. I don’t know the performance.

Gateworks is excited about the GW5520 and happy to answer any questions. Jibril : $400 for a board with i.MX6 800MHz Dual Core ?? IMHO a bit expensive… This board is not a basic i.MX6 Dual Core board. It features a PCIe switch which allows for 2 GbE ethernet channels and 2 Mini-PCIe slots for wireless cards. It also features all Industrial rated components standard which cost more than commercial temperature parts. The board also has video components which adds to the cost. The price can be reduced if the board is customized to meet any specific needs. The board… Read more »

Is that use with mikrotik router os with bandwidth manager ????