MeegoPad T01, Pipo X7, MeLE PCG03, MINIX NEO Z64, etc.. you could name a pretty long list of Intel Bay Trail-T Z3735 mini PCs running Windows 8.1… They all cost above $100, but the ones that include a valid Windows 8.1 license usually cost closer to $150. That’s because contrary to the Windows 8.1 with Bing on small tablets that comes free and with a one-year subscription to office 365, Windows 8.1 with Bing on mini PCs adds about $30 to the price, and it does not even include a one-year subscription. So using a tablet as a mini PC should be cheaper, even with the extra touchscreen display and battery. And as I checked out Liliputing’s list of cheap Windows tablets, Winbook TW700 stood out as it sells for just $60 on Micro-center (US only) or $70 on Amazon US

, and features a mini HDMI port, a full-sized USB port, meaning it can easily be connected to an HDMI TV, and be used as mini PC for over half the price of actual Windows 8.1 mini PCs. 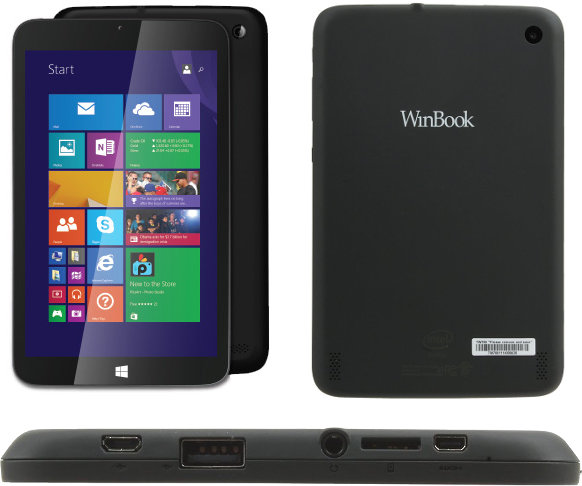 So the memory and storage are a bit tight, but it should probably be enough to run Kodi 14 with the default skin, and should make a very good media player based on my Kodi 14.1 testing with MeLE PCG03, providing a smoother experience than on any ARM based mini PC I tried in the past, as long as you play videos up to 1080p, and don’t need HEVC/H.265 video decode. Some people also noticed an overheating issue on other devices while playing high framerate videos (50 fps @ 720p or 1080i), leading to throttling on Pipo X7, but I could not reproduce this in MeLE PCG03. It mostly depends on the thermal design of the device, and one person also said running Kodi in Linux does not exhibit the issue, but requires a USB sound card, as HDMI audio does not work (yet). Hopefully a working OpenELEC image will soon be released for Intel Atom Z37xx devices.

As I understand it, Winbook is a US brand and only sells in the US, so if Amazon US won’t ship to your country, you’re out of luck. But as the device is certainly a re-branded Chinese table, so I checked out for similar Z3735G tablet on Aliexpress. I could not find an exact match, but PiPo W7 and Cube iWork7 tablets are selling for about $80 including shipping, and both include micro HDMI and micro USB OTG ports, but no full-size USB port.

Having seen a laptop with a > 2 GHz quad core Bay Trail processor I wasn’t very pleased with its performance so I’ll wait for the next gen 14 nm processors.

Actually there is another vendor on amazon that sells for $ 69.95; only domestic shipping 🙁
Would be nice to have one with an eth dongle for a small low power media server or so.

I got one of these to use as an ebook reader, media player, and “try out Windows 8.1” gadget. I tested it with various media and document files on a microSD card and it works well. The touch screen interface is snappy and display quality looks real good to me. Then I connected it to my HDTV along with a USB hub, keyboard, and trackball to see what I could do in desktop mode. It ran portable apps from the microSD card quite nicely. Battery time depends on what you’re doing, but 3-5 hours is typical. You can leave the… Read more »

@California Bob.
Nice. Pity apparently no one wants to send this one to Europe (and probably the shipping cost will be prohibiite).
You now have a PC with a UPS !

I tested out the TW700 and found it to be great as long as you are aware of the memory limitations.
I’m grabbing another of the cheap open box models next time I’m by microcenter.

@California Bob: thanks for the info on the TW801. Pity they do not ship to EU, and pity they do not have a store in Silicon Valley where a collegue visiiting our Santa Clara office could buy one for me. THne again I expect more to show up in due time.