Allwinner R-series processor family, such as Allwinner R8, is supposed to target “IoT applications”, but IoT must have recently taken a whole new meaning as the latest Allwinner R58 octa-core processor targets 2-in-1 laptops running Android. Allwinner website however lists R58 as an high-end IoT platform for virtual reality and robotics. 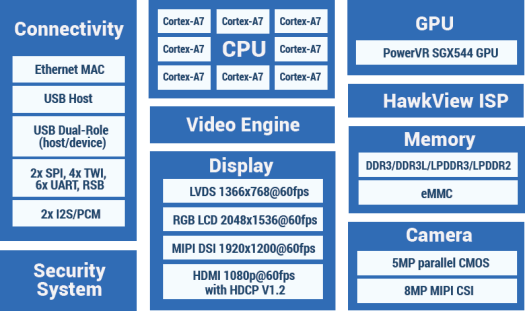 Eva Wu, Allwinner marketing manager, explains that Allwinner R58 is similar to Allwinner A83T, which I tested in a Foxconn tablet, but alledgedly with higher frequencies for the CPU and GPU. However, Allwinner A83T was also clocked at 2.0GHz in the tablet I tested. Go figure… Anyway, you should not expect amazing performance from that processor (Antutu probably around 30,000), but it should still be usable.

The operating system appears to be a customized version of Android called “Double OS”, and optimized for work to make it “perfectly compatible with office” and with some “adaptation of the keyboard and mouse”. Further improvements are also scheduled for Q3 2015 such as multi-window and Google Work support. A 64-bit version of the processor, (Allwinner R88) will be launched on Q4 2015 supporting either Double OS 3.0 or Windows 10.

Charbax is a Computex 2015, and he filmed the Android laptop in action, and got a few more details about the solution.

Ugh, PowerVR. No thanks.