When Nvidia introduced Nvidia Tegra X1 octa processor with a 256-core Maxwell GPU at the very beginning of the year, I was expecting Jetson TX1 is follow suit in the next few months, but instead the company launched Nvidia Shield Android TV box based on the processor. The company has now launched Jetson TX1 module and development board. 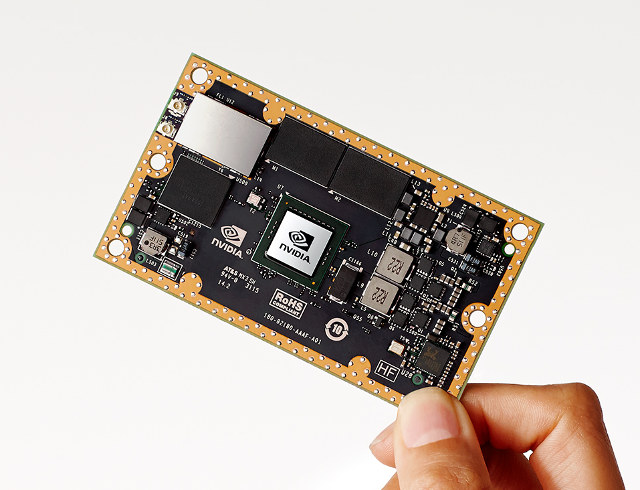 Let’s check the module first and its main specifications and features:

The module support Linux4Tegra operating system based on Ubuntu. Libraries and drivers to leverage the Maxwell GPU include cuDNN  CUDA-accelerated library for machine learning, VisionWorks CUDA-accelerated OpenVX 1.1 library and framework for computer vision, graphics drivers with support for OpenGL 4.5, OpenGL ES 3.1 and Vulkan, and support for CUDA 7.0.

The company did not release that much information about the development board in the press release, but send a few samples to various blogs and developers, including Kangalow of Jetsonhacks.com.

The development board relies on TX1 module for the processor, storage, memory, and wireless connectivity, and a carrier board for I/O connectivity: is

Kangalow reports the fan is not active very often with the heatsink providing enough cooling most of the time, and the performance feels like the one of a typical laptop in Ubuntu.

The guys at Phoronix also got a board, and while they did not run their own benchmarks yet, they shared some provided by Nvidia themselves pitting Tegra X1 (Linux4Tegra) against an Intel Core i7-6700K (Windows 8.1…) showing for example graphics performance (GFXBench 3.1) is similar, but Jetson TX1 consumes 5 times less power.

Jetson TK1 board with a 192-core GPU was $192, so you may dreamed that Jetson TX1 with a 256-core GPU would be $256, but it did not exactly turn out that way. Nvidia Jetson TX1 development kit will start showing for pre-order for respectively $599 (retail) / $299 (education) on November 12 in the US, with a launch in other regions in the next few weeks. The kit will include the module and carrier board, a camera board, a heatsink and fan and required cables. Jetson TX1 modules will be available in Q1 2016 for about $299 per unit for 1k order.

Now i understand why there was a discount for jetson TK1 some days ago.

hi folksi first sorry my bad englısh…
I really expected this board. But the real point as you imagine price..
you know “Nvidia Shield Android TV box”. Can we install linux(natively via u-boot) to this box insted of above new board. or what is the difference ??
another question is sata speed of this board(ı mean sata 6gbps or sata 3gbps).
thanks for reading…

@hex
It’s quite possible they made that board for companies who want to use their TX1 module.

You can install Ubuntu on Shield TV box @ http://forum.xda-developers.com/shield-tv/general/ubuntu-utopic-nvidia-shield-tv-t3150352

The main differences are more memory, the expansion slots, and the headers. Linux4Tegra will also be officially supported on the board. That’s mainly for embeddded. For example, I don’t think you can do anything really useful with a TV box on a drone.

I was a expecting a TK1 price of $200. OK so add another $100 for extra RAM, better heatsink and whatever but $600 … what are these folks at nVidia smoking there ?
I mean it’s a very nice board but the SOC is kida obsolete by now as the A72 is already in SOCs from Mediatek and Qualcomm. If it had A72 cores then yes, maybe it would be worth it.
I suppose you buy thing for the nVidia GPU, to use that for some stuff but … I just want a powerful ARM64 board.

I agree with you, but compare this with APM X-C1 that sells for 1500$. Also as far as I know Qualcomm has no board with Cortex A72 cores. As far as I know they only have this https://www.arrow.com/en/products/dragonboard410c/arrow-development-tools/. Also for now MT8173 is only to be found in Amazon Fire TV 2 and even though seems to offer some impressive single thread scores it does not to prove to be to impressive when compared to RK3288 in multiple thread and GPU benchmarks. So for now I think they can get away with this, and in time prices will also go… Read more »

Heh… I want a pretty powerful CPU and GPU. It should be noted that you can’t do an apples to apples comparison of the A72 and this. You’ll need proper benchmarks to know if you’re on the ball with the assessment of it being “old” or not. (I’m betting in-between to not right at the moment, knowing how it benched out…) Not to mention the reality RAF put forth. You’re going to play HELL getting any board with those SoCs for less than $1500 right at the moment. All in all, I think it’s about $150 or so “overpriced”. It’s… Read more »

Interesting. Just as some companies were getting nice TK1 modules on the market, too. Avionics, EmbPower. Kind of sucks for them that they will have first-party competition now :\ Hopefully this will drive down the cost of those modules.

The Anandtech article about this was pretty interesting, because they mention how companies were just using whole Jetson TK1 boards as production units.

Well compared to other ARM64 offerings out there this is probably great but unless you really need ARM and a powerful GPU the Intel Atom is much more reasonably priced and available … It might not be quite out there as far as performance goes … Speaking of which, there are fanless i7 mini PC on aliexpress for less than this and nVidia can say what they want an i7 wipes the floor with this, at least as far as the CPU is concerned but it’s probably a pretty good match for the GPU too. Intel also has excellent Linux… Read more »

@Marius Cirsta
@RAF
Although those are made for different applications, I’ve just realized Jeston TX1 devkit is also in the price range of Qualcomm development kits by Intrinsyc.
http://www.cnx-software.com/2014/11/28/intrinsyc-introduces-snapdragon-810-powered-mobile-and-tablet-mdps-dragonboard-development-kit/

@Andrew
Yes, evaluation kits are most the time done with susidized component to get low prices. It’s forbiden (dumping) and dangerous (no legal coverage) to launch product in the field with them. With this approach Nvidia is covered form potential legal risk. That also explaination of the price difference with professional design. Some as the CALAO Systems implementation of the TK1 justity their price (high quality, very well defined, SMARC standard). Let see the quality and definition of the proposed module!

why to compare GPU performance with Intel Core i7? why not Geforce GTX970?

@Jean-Luc Aufranc (CNXSoft)
Thanks, for some reason that looks more tempting to me. It’s still expensive but …. I was expecting AMD to finally show up with their Opteron, I think it’s getting to now be 2 years late which is a record even for AMD 🙂

@Fan
They must have made the comparison because both are SoC with built-in GPUs and relatively low power (although the Intel part is said to consume 5X mores).
http://ark.intel.com/products/88195/Intel-Core-i7-6700K-Processor-8M-Cache-up-to-4_20-GHz

GTX970 requires at minimum a 500W power supply-> http://www.geforce.com/hardware/desktop-gpus/geforce-gtx-970/specifications, so it’s a completely different league. It will be much faster, but consumes much more too.