We first found out about CubieTruck Plus (aka Cubieboard 5) this summer, and while at the time we did not have the full details, it was clear from the board picture and name, that is was an update to CubieTruck board, replacing Allwinner A20 dual core processor by Allwinner A8 octa-core processor, and ditching the VGA port for DisplayPort while keeping most of the same features of the original version. 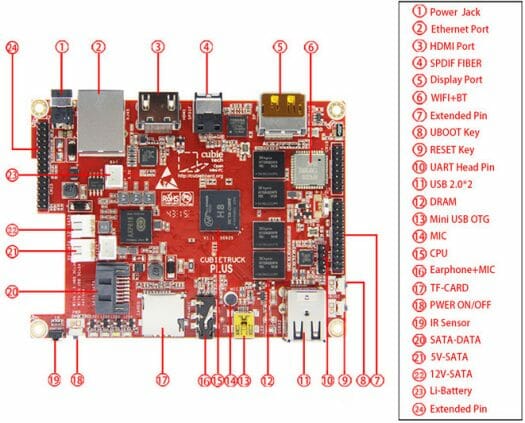 The company has now provided more details while announcing the launch of the board in China, and it turns out CubieTruck Plus has a few more advantages, and at least one drawback.

So that means other improvements include a faster eMMC interface, on-board microphone, full support for headset via the 3.5 mm audio jack, and 16 more I/O pins. The main disadvantage is that due to the USB to SATA bridge, the SATA interface will now be much slower, closer to 30MB/s sequential read and write speeds if properly implemented, instead of the 180MB/s SATA read speed I measured in CubieTruck using  a 128GB SSD. 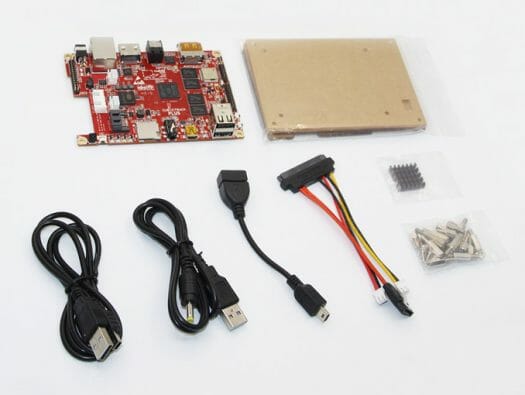 The CubieTruck Plus will ship with an acrylic case, a fan, a SATA cable, a USB OTG adapter, a mini USB to USB cable, and a USB to power cable. Since the dimensions of the new and old boards are the same, CubieTruck Metal Kit case will also be compatible, except they’ve made some modifications to the back plate due to the VGA to DisplayPort replacement.

CubieTruck Plus can be purchased for 539 CNY (~$84 US) on Taobao. A few more details may also be found on the product page.

Thanks to MigSu for the tip.

Had this board had native SATA, i’d have placed an order now. Either that or USB3.

It’s the same strange design as the Banana Pi M3. H8/A83T has only one USB host and one OTG port therefore all USB host ports and the ultra-slow USB-to-SATA bridge (GL830 — don’t expect to exceed 15 MB/s write speeds) have to share bandwidth since they’re behind an internal USB hub.

And without a large heatsink or even a fan you won’t be able to clock the H8/A83T above 1.2 GHz over longer periods of time. For many use cases the older Cubieboard is still faster (same with Banana Pi M3 vs. the original M1, their A20 SoC simply rulez)

whats current state of SGX544 on Linux ? as far as i remember there was no support for that gpu

@nofun
It depends on the SoC vendor in question. Actions Semi released a binary driver for SGX544 (used in their S500) that works somewhat: http://forum.linux-xapple.org/t/gpu-driver-install-and-benchmark/155

As far as I know you won’t get this from Allwinner for their SoCs.

saw that these on Aliexpress DIY Repair Shop as well…
http://www.aliexpress.com/item/Free-Shipping-cubieboard5-cubietruck-plus-cubieboard-5-H8-Development-Board-Android-Linux/32584700734.html

I’ve been wrong before. Unlike Banana Pi M3 on the Cubietruck Plus the GL830 USB-to-SATA bridge is *not* behind the internal USB hub. A83T/H8/R58 have two host ports (one EHCI/OHCI, the other EHCI only to be used for HSIC). On the CT+ the USB hub is connected through HSIC and provides the 2 type A ports sharing bandwidth and the other host port is used for the GL830.

So while GL830 is still a bad choice (15/30 MB/s max. write/read) at least ‘SATA’ has not to share bandwidth with other USB devices.